Home to the Gills since the club’s formation in 1893, the 11,582 capacity ground consists of three covered stands and one temporary structure for away fans.

Priestfield stadium has been home to Gillingham FC since the club’s formation back in 1893. Originally founded as New Brompton Football Club, the founders were able to purchase a plot of land after issuing 1,500 shares priced at £1.00 each.

The first iteration of Priestfield simply consisted of a freshly laid patch of grass and pavilion, with fans expected to gather around the side of the pitch to watch the match.

The inaugural fixtures were played on 2nd September 1893 with the reserve team playing Grays Athletic, followed by the Senior team taking on Woolwich Arsenal in the main event.

Although there are newspaper articles and match reports to verify a lot of early facts, one area of contention amongst historians remains the origins of the stadium’s name.

In terms of the stadiums growth however, undeniably the most significant period occurred in the post-war period.

Starting in 1955, the pitch was finally levelled flat after years of sloping and Priestfield received a new terrace on Gordon Road. Floodlights were added in 1963 and by the mid 1980s the ground’s capacity had officially reached 22,000.

However, this was to all but half in the proceeding decade following the publication of the Taylor Report at the start of the 1990s.

Spearheaded by the club’s new owner Paul Scally in 1995, the club undertook an extensive redevelopment of Priestfield. The ground became all-seated with a new Gordgon Road Stand in 1997, Rainham End in 1999 and new main stand in 2000.

Currently a temporary stand named after Brian Moore completes the stadium in its current form.

Below is a seating plan of Gillingham's Priestfield Stadium: 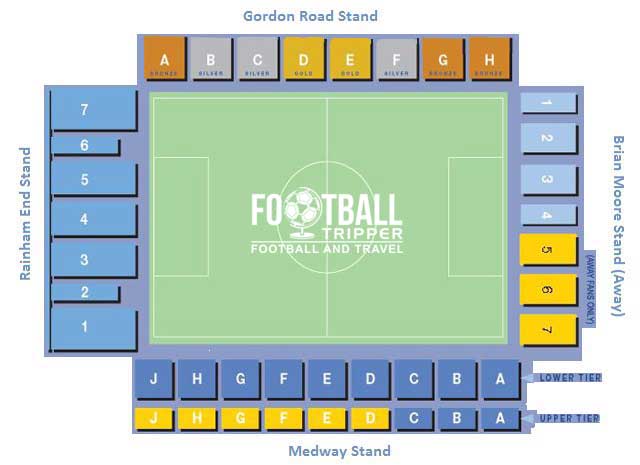 Away Fans are housed in the Brian Moore Stand which is an all-seating scaffold style stand capable of seating an estimated 1,500 supporters.

Originally envisioned as a temporary solution, the structure has remained intact for many seasons now and has also occasionally been shared with home supporters although not so much in recent years.

Whilst the comfort levels in the stands are fine, with the seats well spaced and views adequate, the one real bug bear for most supporters is the lack of roof.

Not only does this leave fans exposed to mother nature’s more unpleasant side, it also negates the travel of noise which in turn reduces the perceived atmosphere.

Visiting fans often enjoy stamping their feet on the steel to generate a raucous noise, and for those who aren’t used to it, the vibrations that it gives of certainly don’t feel safe although in reality it’s perfectly fine.

Across the road from the train station is the main high-street of Gillingham, and there are a few pubs less than five minutes away such as the Southern Belle, and the Britannia – both of which are quite small and get crowded on matchdays with a mixture of fans.

Within the residential area of Priestfield itself there are two potential pubs to check out before and after the game depending on your starting point.

To east there is the popular albeit further away The Cricketers, and there used to be The Livingstone Arms to the west but it has now closed.

At the stadium itself on Redfern Avenue there is the club run Blues Rock Cafe which is your typical stadium pub with plenty of tvs showing Sky Sports News and cold beer on tap.

Within five minutes of Gillingham train station there is a Subway, McDonalds and independent kebab house known as Ozzy Grill & Fish bar.

En route the stadium there is a Co-Op which is a good place to grab a sandwich otherwise there is the Gillingham Fish Bar just off of the roundabout on Gillingham road which is popular on matchdays.

Inside Priestfield there are the usual range of options from inside the concourses and more pub meal type food on offer at the Blue Rock Cafe.

The club shop at Priestfield is known as the Megastore and it sells merchandise ranging from a Gills Dezzie Bear to a kids lunch box as well as the usual collection of replica kits and sportswear.

The store is open from the following times:

You can also purchase Gillingham get up on the internet from the club’s official online store.

It doesn’t look like Gillingham FC offer fans the chance to undertake a stadium tour of Priestfield.

We’ll update as soon as they change this, in the mean time you could try contacting the club (no guarantees).

How to buy Gillingham Tickets

Tickets to see the Gills play at home can be purchased via the usual channels including phone (01634 300000 select option 1), in person at the ticket office (same opening times as club shop above) and most popularly, the online ticket office.

Ticket Prices for League One are as follows, with () referring to on the day prices:

How to get to Priestfield Stadium

Where is Priestfield Stadium?

Gillingham FC are based in Kent which is located within south-east England.

Priestfield stadium in Medway lies parallel to the railway line and is less than half a mile to the centre of town.

Priestfield Stadium’s address for satnav is as follows:

Priestfield is situated within a residential area and the roads have restricted access on match days meaning on street parking is essentially a no go unless you are a local resident.

The club recommend parking at Woodlands Primary School (Woodlands Road ME7 2DU) which is about a 10 minute walk to the stadium.

Costing just £3 and operating on a first come first served basis from 1.30 pm each Saturday the car park should be your first choice although with 100 spaces it can be limited for space.

Also note that the gates are locked at 6.00 pm, so don’t plan to make a night of it!

Gillingham train station is exactly 0.6 miles from Priestfield with the journey taking just over 10 minutes by foot.

Located on the south-eastern route to London, there are four trains per hour to London with one service going to St Pancras/Kings Cross and the other going to Victoria.

The Balmoral hotel next to Gillingham Station is the closest accommodation option to Priestfield Stadium with the King Charles Hotel near to the University of Kent’s Medway Campus another reasonably priced option.

Who plays at Priestfield Stadium?

English side Gillingham play their home matches at Priestfield Stadium.

What is the capacity of Priestfield Stadium?

As of 2022 Priestfield Stadium has an official seating capacity of 11,582 for Football matches.

When was Priestfield Stadium opened?

Priestfield Stadium officially opened in 1893 and is home to Gillingham

What is the postcode for Priestfield Stadium?

The postcode for Priestfield Stadium is ME7 4DD.

Covid Restrictions may be in place when you visit Priestfield Stadium in 2022. Please visit the official website of Gillingham for full information on changes due to the Coronavirus.