New York Stadium or AESSEAL New York Stadium for sponsorship is the misleading name of the stadium belonging to the rather unassuming football team, Rotherham United F.C.

Located in South Yorkshire, the town of Rotherham which certainly likes to sleep, the 12,021 capacity ground was constructed at a cost of £20 million and first opened in 2012.

New York Stadium was officially opened on 12th March 2012 by Prince Edward, Duke of Kent, however it wasn’t until pre-season started in July that the inaugural football match against Barnsley was played.

The first competitive fixture in the league was held on 18th August against Burton Albion, with The Millers christening the ground with an impressive 3-0 victory.

Built over a 10 month period starting in June 2011, Rotherham United publicly announced their intentions to construct a new stadium after leaving their historic Millmoor Ground in May 2008 following a land dispute with the former Chairman.

The Millers temporarily located to Don Valley Athletics Stadium in Sheffield, in a move which was similar to Brighton’s during the construction of The Amex.

Taking around 4 years to plan in total, the club had identified a suitable plot of land by January 2010, and were shortly granted planning permission after submitting sketches to the local council.

Designed by S&P Architects, the stadium cost an estimated £20 million to construct and has a total capacity of 12,000.

Although at first it may seem to football fans that New York Stadium is referencing the iconic American city, this isn’t actually the case.

Rotherham’s board wanted to preserve a little bit of local history, and opted to follow the tradition of nearby grounds such as Bramall Lane and Hillsborough which referenced traditional areas.

On 16th April 2014 New York Stadium hosted its first International match when it welcomed an England Under 18s game against Germany.

Although this attracted a large 9,000 capacity crowd, the record attendance to date was set on 7th September 2013 in a game against local rivals, Sheffield United.

Below is a seating plan of Rotherham United's New York Stadium: 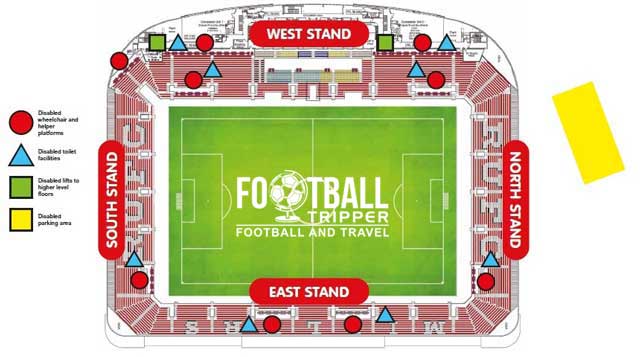 Rotherham’s ground is comprised of the following four sections:

Travelling supporters who see see their team take on Rotherham are usually housed within the South Stand which typically has an allocation of around 2,500 tickets.

Located behind the southernmost goal-end, this section of the ground is known as the Morrison Stand and consists of seating arranged across a single-tier.

If the away contingent is expected to be smaller for whatever reason, fans are shifted to the corner of the adjacent Ben Bennet Stand to the east which stretches for the length of the pitch opposite the main stand.

Likewise this also has a single-tier of seating with flawless views throughout courtesy of the modern cantilevered roof design.

Unlike other “generic” new grounds, Rotherham’s New York Stadium is actually within a decent location in town meaning that fans have decent drinking options before and after the match which helps to make the day out slightly more memorable than if it were located within an out-of-town shopping centre.

Entrance to the ground is permitted through the increasingly ubiquitous use of electronic turnstiles, meaning that you must be in possession of a ticket before attempting to enter.

Away tickets are often for sale on the day of the match however they carry a £2 surcharge.

Although they are on the opposite side of the River Don to the stadium, you will be pleased to know that there are a decent selection of pubs relatively close to Rotherham’s Ground.

Next to the station there is The Bridge Inn which is CAMRA listed and serves locally brewed beers amongst other things, and only slightly further is The Rhinoceros which is a popular Wetherspoons.

Following the river south towards Main Street which will take you closer to New York Stadium there is the likes of the The Cutlers Arms, and The Bluecoat both of which stock real ale as well as a variety of other refreshing beverages.

Once you are at the ground you can also purchase pints of Fosters and John Smiths Draught.

Similar to the pub situation, the main eateries all tend to congregate on the eastern bank of the river, which adds less than five minutes to the already short distance to Rotherham’s ground.

The most notable options a handful of independent chippies which sell everything from kebabs to pizza.

The Millers Club Shop located at the New York Stadium has a decent range of merchandise, and when used on conjunction with the official online store, is an excellent way to purchase merchandise of the team.

The club store known as the Red & White Shop has the following opening times:

It doesn’t look like Rotherham United F.C advertise stadium tours of the New York ground to the general public. Sorry.

You could always try phoning and emailing a club and see if they’ll take you on a private stadium tour for a small fee but there’s no guarantee that they will.

How to buy Rotherham United Tickets

Tickets to see Rotherham play at home can be purchased via the usual channels such as via phone (08444 1407540), in person at the Red & White Shop and most popularly online using the club’s official e-ticketing site.

For Championship matches the club have implemented a flat pricing system which means that there are no categories, with prices designed to slightly reward those who book in advance.

Note: Concessions available for those in full-time education, over 60s and members of the armed forces.

How to get to New York Stadium

Where is New York Stadium?

The New York Stadium is located on the Northern Bank of the confluence between the River Don, approximately half a mile from Rotherham’s traditional town centre.

New York Stadium’s address for satnav is as follows:

Unfortunately there is very little parking available to both sets of fans at The New York Stadium on match days with obvious exceptions made for disabled supporters who pre-book parking spaces with the club.

Thankfully there are a number of private car parks around the ground with The Rotherham Interchange on Frederick Street (S60 1RD) coming the most recommend by the club.

For full information and prices visit this page.

Rotherham Central railway is located less than half a mile north of New York Stadium with the walk taking the average fan a fraction over 5 minutes.

Upon exiting the station turn left onto Central Road and follow the canal down south as it merges with the River Don, passing both the Police station and the Metropolitan Council building.

The Stadium is accessible by both following Don Street to the end or turning right onto Main street followed by a left on New York Way.

With Rotherham town centre being reasonably compact it’s quite easy to find a hotel within walking distance of The New York with the likes of the Corona, Coach House and The Prince of Wales all solid options.

Across the River Don there is a small cluster of hotels located on A618 Moorgate Road such as the Carlton Park Hotel and The Good Nights Inn but these are around a 15-20 minute walk away and not exactly in an area which can be described as “buzzing”.

Who plays at New York Stadium?

What is the capacity of New York Stadium?

As of 2023 New York Stadium has an official seating capacity of 12,021 for Football matches.

When was New York Stadium opened?

What is the postcode for New York Stadium?

The postcode for New York Stadium is S60 1FJ.

Covid Restrictions may be in place when you visit New York Stadium in 2023. Please visit the official website of Rotherham United for full information on changes due to the Coronavirus.