Chesterfield’s new stadium first opened on 24th July 2010 with a pre-season friendly against Derby County, with the first competitive league fixture played three weeks later against Barnet. Although attendances rose in the first season, it wasn’t until The Spireites played rivals Rotherham that the record attendance of 10,089, close to maximum capacity was set.

Constructed on the site of a former Glassworks factory, the Proact took just over a year to build in total, although planning began as far back as October 2004. The club’s previous home, Saltergate or the Recreation Ground as it was officially known first opened in 1871 – one of the oldest stadiums, and was falling into a state of disrepair.

The original plan was to redevelop the site on Wheeldon Mill which housed the town’s former Greyhound Stadium. The council however encouraged the club to integrate the Proact stadium into parts of its plans for regeneration the “A61 corridor”, north of the town centre.

By February 2005, the club had agreed upon the site, and architects, Ward McHugh Associates, were hired to design concepts after their excellent work on Goodison Park. Three years later, planning permission was formally granted, and after the land was decontaminated construction promptly began on Thursday 23rd July.

Costing an estimated £13 million, Chesterfield’s stadium is comprised of four separate stands which  results in capacity of 10,500. If the ground should ever need to be expanded, the corners can be filled in to increase the capacity to 13,000. Initially the ground was known as the b2net Stadium, but after Swedish Company Proact acquired the company the name officially changed at the start of the 2012-2013 season.

Below is a seating plan of Chesterfield's Technique Stadium: 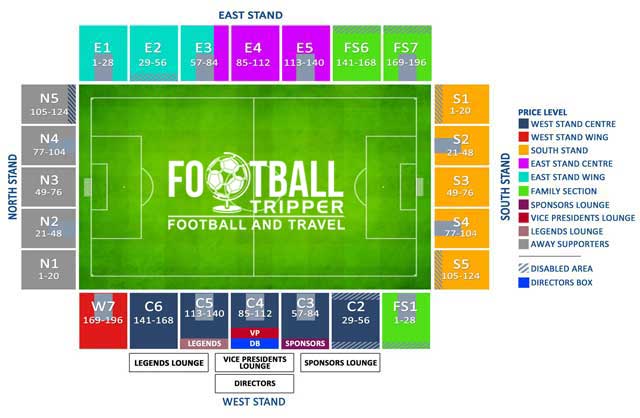 Away fans are usually allocated seats within the North section of the ground which is known as the Rubicon Print Stand for reasons of sponsorship. Capable of seating an estimated 2,100 spectators, Chesterfield can opt to either increase the allocation by housing additional fans in the Spencers Solicitors Stand or, if the number of traveling fans is expected to be smaller, relocate the fans entirely to the East Stand.

The single-tiered north stand is divided into five distinct sections, with each set of sets sharing the same faultless views of the pitch. The low-roof combined with the proximity to the pitch helps create a certain intimacy which compounds the atmosphere and noise generated by the visiting supporters.

Entrance can not be gained from the turnstile unless you have purchased a ticket beforehand, with the portakabin outside the stand acting as a ticket office.

The pubs immediately within the vicinity of the Proact Stadium such as the Rose and Crown, the Crown and Anchor and the Donkey Derby are normally reserved for home fans only, although this that much of a problem as Chesterfield is well-equipped with places to drink.

Not withstanding the town centre which is chockablock with boozers, the journey on foot from the railway station to the ground along Sheffield Road which runs parallel to the A61 will see you right are adequately lubricated with both St Helens Inn, and the Hare and Hounds inn acting as decent starting points.

If you follow this road northwards past the ground up to the roundabout you will also encounter a number of boozers including the CAMRA listed Derby Tup in addition to the Travellers Rest and Red Lion.

Located approximately 2 miles north of the town center the Proact is situated within a well-built up commercial area next to no less than four supermarkets: Iceland, Aldi, Tesco and Sainsburys.

Towards the south of Chesterfield’s ground there is a KFC and Costa Coffee with the independently run takeaways generally situated further north along Sheffield Road. Tandoori restaurants such as Star of Sall, Kaash and Delhi 41 sometimes popular after the match.

Within the concourse there are of course the booths selling the usual food including locally made Jackson Pies which are worth trying.

Chesterfield FC have a club shop at Proact Stadium located in the front of the HTM West stand in addition to their own online site, CFC Official Store . The opening times for store at the ground are as follows:

It doesn’t appear as if Chesterfield FC currently offer fans the chance to undertake a stadium tour of Proact Stadium. If this changes, we’ll be sure to update this section.

How to get to Technique Stadium

Where is Technique Stadium?

Proact Stadium is located in the Whittington Moor area of Chesterfield which is approximately 1.8 miles north of the traditional town centre, county of Derbyshire.

Proact stadium’s address is as follows:

Car Parking at the Proact stadium is reserved for those with permits and with the club creating a Traffic Management Plan which was approved by the Safety Advisory Group no cars are typically permitted into the ground for 30 minutes either side of the match. This means that for half an hour before and after kick-off you will not be able to enter/exit the stadium by car.

Public car parks are therefore a much better option for the visiting fan with the Stonegravels car parking at the Council Depot recommended by the club. Open from 1.00 pm to 5.30 pm at the Old Brick Works Lane next to the Rose and Crown Pub the car park has space for around 70 cars so you’d best get there early.

Chesterfield Railway station is located approximately 1.4 miles south of the Proact stadium which equates to a walk of around 30 minutes. Situated on the Midland Main Line with trains operated by East Midlands there is an hourly service between Liverpool and Norwich and twice hourly service between Sheffield and London.

To the south of the stadium near the A61 roundabout there is the expensively priced Casa Hotel, and across the River Rother parallel to the railway tracks there is the Premier Inn Chesterfield North.

Back towards the town centre there is much more choice including the classy Wetherspoons combination of Hotel/Pub, Ibis Chesterfield Centre and the Chesterfield Hotel near to the train station.

Who plays at Technique Stadium?

English side Chesterfield play their home matches at Technique Stadium.

What is the capacity of Technique Stadium?

As of 2023 Technique Stadium has an official seating capacity of 10,504 for Football matches.

When was Technique Stadium opened?

Technique Stadium officially opened in 2010 and is home to Chesterfield

What is the postcode for Technique Stadium?

The postcode for Technique Stadium is S41 8NZ.

Covid Restrictions may be in place when you visit Technique Stadium in 2023. Please visit the official website of Chesterfield for full information on changes due to the Coronavirus.