Victoria Road or the ridiculously sounding London Borough of Barking & Dagenham Stadium for sponsorship purposes, is the home ground of League Two football team Dagenham & Redbridge F.C. First opened in 1917, the stadium currently has a capacity of 6,078 after undergoing renovations back in the 2009.

The piece of land adjacent to Victoria Road has effectively been used as a Football Ground since 1917 when it was owned by the local Sterling Works company who used it to host home matches of the local factory team. The next tenants were Briggs Sport who vacated the premises in 1955 with current residents Dagenham and Redbridge F.C who have occupied the site every since, choosing to mark their territory with the construction of a new main stand less than a year after moving in.

The club continued to invest in the facilities at the stadium over the next period of around 5 years or so which saw the addition of a new stand added at the Victoria Road side of the ground. Floodlights were also installed, allowing the hosting of the first night time match at the stadium on 26th September 1957 between Dagenham and Woodford in the FA Youth Cup.

The ground stagnated over the next 30 years and it wasn’t until Redbridge Forest firstly signed a ground share agreement in 1990, and secondly when the clubs merged in July 1992 that further capital was invested. Improvements to the facilities has been fairly consistent ever since, with the construction of a new 1,240 capacity stand on Pondfield Road in 2009 an example of the club’s continued investment.

Since 2007 the club have signed a sponsorship deal with Barking and Dagenham London Borough Council with Victoria Road officially renamed to “The London Borough of Barking & Dagenham Stadium”. Predictably it is almost never referred to as this by fans.

Below is a seating plan of Dagenham and Redbridge's Victoria Road: 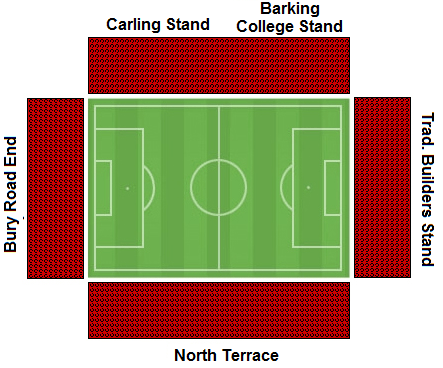 Away fans are housed in the Traditional Builders stand which is capable of accommodating up to 1,200 fans.

Some fans report that the away entrance is slightly hard to find due to a lack of signs but as long as you know that it is essentially at the opposite side of the ground to the main entrance you can’t really go wrong. Just walk through the car park, past the supporters club (stopping for a pint if you wish), and then turn right to reach the back of the main stand with the entrance to The Traditional Builders stand located within the right hand corner.

There’s speculation that the current stand may be returned to home supporters as many believe that it has the best views in the stadium due to its raised construction, but for now away supporters should enjoy the privilege, and not complain too much as it is miles ahead of other lower league away sections.

At Victoria Road there is the club run Daggers Clubhouse which welcomes both home and away supporters with a reasonable entrance fee of just 50p for non-members. The bar is well stocked with a “friendly atmosphere”, free wi-fi for the smart phone generation and multiple screens with Saturday staple, Sky Sports News.

If you are attending a high-profile match or local Derby (Leyton Orient or Southend) then you may be refused entrance to the Social Club a the ground in which case, you’re interests will be better served by one of the many local pubs.

The Eastbrook Pub located past Golds Gym on Rainham Road is probably the closest to Victoria Road with other options further away on the tube including The Barking Dog (Barking tube station) and The Lord Denman (Dagenham East). Both pubs are Wetherspoons so you’re unlikely to get any surprises!

The ground sells everything you would expect to see and no more: Burgers, chips, Pies, soft drinks teas and coffee with the most expensive item on the menu being the half pounder Cheeseburgher which will certainly fill a hole.

Daggenham and Redbridge operate a club shop at Victoria Road in addition to their own official online site, The Daggers Shop.

For more information, to confirm opening hours or to check availability of stock feel free to phone the store on 020 8592 1549 ext 21.

Tickets to see Dagenham can be purchased via the usual channels including telephone ( 020 8592 1549 ext 21) , in person at the stadium ticket-office/club shop (opening times listed above) and on the internet by visiting Daggers Tickets.

The stadium on Victoria Road is located in the East London suburb of Dagenham which is around 12 miles east of central London.

How to buy Dagenham and Redbridge Tickets

Tickets to see Dagenham can be purchased via the usual channels including telephone ( 020 8592 1549 ext 21) , in person at the stadium ticket-office/club shop (opening times listed above) and on the internet by visiting Daggers Tickets.

How to get to Victoria Road

Where is Victoria Road?

The stadium on Victoria Road is located in the East London suburb of Dagenham which is around 12 miles east of central London.

Dagenham’s Stadium Address for satnav is as follows:

As a London suburb parking is very limited at the ground although you may be able to chance your arm and park on the street providing there is space. If you do this you are advised to pay attention to any parking signage to avoid getting a ticket!

Coming into London you will want to arrive at Liverpool Street if possible, and from there you can either get the tube or overground to Romford Station which is around 3 miles from the ground.

It’s essentially a case between Overground + Bus against transferring once on the London Underground.

The Tube has a lot of stops and is a bit dark and dingy whereas the Overground is quicker, but this is offset by the ballache of having to then get the bus.

As an ex-Londoner who hates buses I would personally tube it, but it’s entirely up to you.

From Liverpool Street look for the platform with the Greater Anglia Service to Romford Station, and once you have arrived turn left from the entrance to find the bus station. From here the 103 will drop you right off outside the ground.

There is a real lack of hotels immediately within Dagenham with nearby Hornchuch offering up the Devonshire Hotel and Romford much better in terms of accommodation options. There is a Premier Inn Romford Central and a Travelodge which always seems to promise cheap deals.

Who plays at Victoria Road?

English side Dagenham and Redbridge play their home matches at Victoria Road.

What is the capacity of Victoria Road?

As of 2023 Victoria Road has an official seating capacity of 6,078 for Football matches.

When was Victoria Road opened?

What is the postcode for Victoria Road?

The postcode for Victoria Road is RM10 7XL.

Covid Restrictions may be in place when you visit Victoria Road in 2023. Please visit the official website of Dagenham and Redbridge for full information on changes due to the Coronavirus.