Planning application for New Meadow was first filed in 1999 by chairman Roland Wycherley but as a result of local opposition and lack of immediate capital building on the new site didn’t commence until half way through 2006.

The previous ground, Gay Meadow had been home to Shrewsbury Town since 1910 but due to lack of infrastructure the capacity was reduced from 14,500 to 8,000 following the publication of the Taylor Report which feared that the small back street known as “The Narrows” could cause excessive congestion.

With a shrinking capacity, a high cost for redevelopment and a location on the banks of the River Severn which was prone to flooding (Most notably in 1998 and 2000), many fans of the Shrews saw a move to a new stadium as vital in securing the long term future of the club.

However local residents weren’t so enamored with the prospect, forming the Sutton Area Residents Association (SARA) who campaigned vigorously against the proposals.

Still, the stadium was a success with the club recording a record 34 games unbeaten at home between March 2011 and September 2012 which stretched over the course of three seasons.

Based on Rushden and Diamonds Nene Park, the stadium was built by specialists Hall Construction with the stadium adding the sponsorship name of “Greenhous” to the stadium’s name to become “Greenhouse Meadow”  after a fan vote in April 2010.

However as of July 2017 local business Montgomery Waters acquired the naming rights.

Below is a seating plan of Shrewsbury Town's Montgomery Waters Meadow: 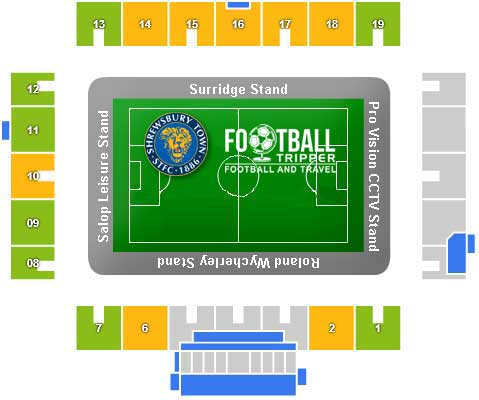 Shrewsbury’s ground is made up of the following four sections: The Pro-Vision CCTV Stand (North), Roland Wycherley Stand (East), The Salop Leisure Stand (South) and The Surridge Stand (West).

Away fans are housed in the North Stand which is currently known as the Pro-Vision CCTV Stand due to reasons of sponsorship rather than the overt levels surveillance football fans are subjected to.

Located behind the goal, this section of the ground can easily accommodate over 1,800 visiting supporters.

Built to the exactly same specification as the other four stands at New Meadow, the North Stand is identical to its opposite South Stand and it consists of a single tier of seating. The opaque material on the back wall at the top permits light to enter the otherwise gloomy seats and pitch.

First opened in time for the 2007/2008 stadium Greenhous Meadow’s four stands are regarded as having a steep configuration which means that even the furthermost seats feel relatively close to the pitch, although this isn’t at the expense of leg room which is more than ample.

Located within the vicinity of Meole Brace Retail Park, the area doesn’t naturally cultivate an array of pubs with a higher concentration of boozers found nearer to the train station along the A5191 Hereford Road, although there are still a few choices.

The pick of the bunch for proximity to the ground is probably The Charles Darwin which is ten minutes east on Sutton Road off of Iteley Road, with The Brooklands Hotel bar located near to the retail park roundabout another popular choice with its large screens and spacious interior.

If you are coming in from Shrewsbury Station then you are spoilt for choice on your walk to the stadium with the Albion Vaults a good starting point located outside the station exit.

As you follow the River Severn down and cross onto Belle Vue Road you will find the Belle Vue Tavern amongst other watering holes.

Local company Jenny’s Catering run the Buffets at Greenhous Meadow which has a wide range of food and drink on offer, including which supposedly award winning homemade pies.

The nearby retail park known as Meole Brace has a McDonalds and a Pizza Hut in addition to Sainsbury’s supermarket which does a decent meal deal if you fancy something slightly healthier.

The Shrews operate a shrewd club shop at New Meadow in the Roland Wycherley Stand in addition to their own official online store. The opening times for the store at the ground are as follows:

For more information, to double check opening hours or to check availability of the latest kit feel free to send an email to [email protected] or phone the store on 01743 289177.

It doesn’t appear as if Shrewsbury Town FC currently offer fans the chance to undertake a stadium tour of New Meadow.

How to buy Shrewsbury Town Tickets

Tickets to see Shrewsbury Town can be bought via the usual channels including telephone (01743 273 943), in person at the New Meadow ticket-office (Monday – Friday: 9.00 am – 5.00 pm) and online by visiting The Shrews e-Ticketing page.

Ticket prices for League One:
Category A

The club also offer 5 game flexi-ticket bundles which allow fans to effectively pay up front for 5 ticket tokens which can be redeemed throughout the season at their convenience.

Five tickets for Category A comes in at £100 (£20 per ticket) and Category B £90 (£18, so whilst the savings aren’t massive, it’s more about making the commitment to attend more matches which is always a good thing.

How to get to Montgomery Waters Meadow

Where is Montgomery Waters Meadow?

New Meadow stadium is located less than 2 miles from Shrewsbury Town next to the A5 between the areas of Meole Brace and Sutton Farm.

The stadium’s Address for sat-nav:

The stadium has a car park of around 670 spaces and although this may sound like a lot there are limited spaces available to fans on matchdays this isn’t the case.

You can’t just rock up on the day and expect a parking space, instead you need to purchase a parking pass ahead of the game from the ticket office at a cost of £5.

Visiting fans and those that are unable to visit the stadium in person in advance can phone the ticket office and purchase one.

Shrewsbury railway station located in the centre of town is exactly 2 miles on foot from Greenhous which means that the 40 minute walk is probably a bit too far for most fans.

The closest hotels out of town are arguably either the Travelodge or Holiday Inn Express which are both plonked on the A5 stretch of road which serves the town.

These are probably only worth looking at if you can drive, otherwise other options back within the town centre are better such as The Old Post Office, The Lion Hotel and the inventively named The Shrewsbury Hotel.

Who plays at Montgomery Waters Meadow?

What is the capacity of Montgomery Waters Meadow?

As of 2023 Montgomery Waters Meadow has an official seating capacity of 9,875 for Football matches.

When was Montgomery Waters Meadow opened?

What is the postcode for Montgomery Waters Meadow?

The postcode for Montgomery Waters Meadow is SY2 6ST.

Covid Restrictions may be in place when you visit Montgomery Waters Meadow in 2023. Please visit the official website of Shrewsbury Town for full information on changes due to the Coronavirus.