Mazuma Stadium (Formerly known as Globe Arena) is a purpose built football stadium located in the Lancashire town of Morecambe towards the north of England.

Opened in August 2010, the 6,476 capacity ground is named after the company which constructed it, and it replaced Morecambe F.C’s former ground, Christie Park.

The Mazuma Stadium opened in August 2010 just in time for the new footballing season, replacing Morecambe’s former home of Christie Park which were a set of outdated facilities having first opened in 1921.

Work officially started at the site on May 9th 2009 with the first step being to clear the area of trees and debris, with the steel structure of the Main Stand (featured in the cover image) assembled in place a few months after in September.

Planning for the new ground located just off of Westgate started back in July 2007 and was initially scheduled to be completed in time for the 2009 – 2010 season but delays meant that the project had to be put back by 1 year, with the former site of Christie Park becoming a Sainsbury’s Supermarket in the process.

The design and layout of the stands was meant to mimic and give a similar feel to the previous stadium with the club opting to retain one main seating stand and three terraces of various sizes.

The inaugural friendly was held against Bolton Wanderers on the 28th July 2010, with the first competitive fixture held against Coventry City in the League Cup a month later in August.

Below is a seating plan of Morecambe's Mazuma Stadium: 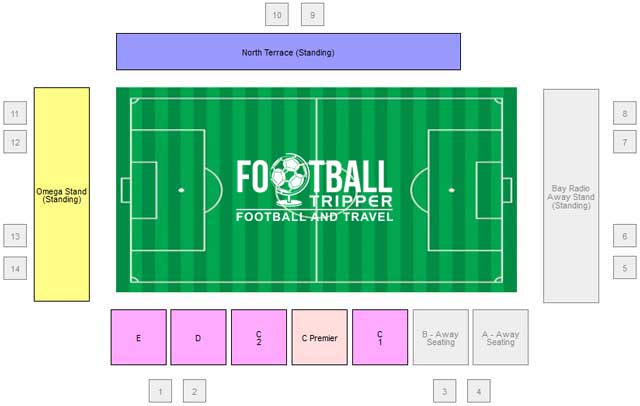 Morecambe’s Mazuma Stadium consists of four stands: The Open Terrace (North), The Bay Radio Stand (East) which is also a terrace but for away fans, The Peter McGuigan Stand (South) which is the main stand and The Omega Holidays Stand (West) which is where the most vocal Shrimps congregate.

Away fans may find visiting Mazuma Stadium a strange experience if they sit in the Peter McGuigan stand as it is shared with home fans and there is next to no physical barriers or stewards separating the fans. Of course in this day and age this is how it should be but the atmosphere at times can be slightly strange with the traditional element of physical tribalism removed.

Still, views within the ground are good and what you’d expect from a newly built stadium, with the most notable improvements from Christie Park being the lack of support beams and unobstructed views.

Visiting supporters have two choices of where to watch the game from when they visit Morecambe’s Globe. The total allocation of around 1,400 tickets is divided roughly into 300 seats and 1,100 terrace places.

Peter McGuigan Stand A and B (Seating)

For those arriving by train the Wetherspoons in the town centre on Euston Road called The Eric Bartholomew may be the first port of all, with the second being on the sea front itself known as the Station Promenade Pub which is family friendly complete with indoor “jungle gym”.

Just outside the stadium itself there is The Hurley Flyer which is a Marston’s Pub complete with matchday parking at a cost of £10.00 although this can be partially reclaimed with the purchase of food. Some fans also recommend the bar at Westgate Caravan Park as despite sounding slightly dodgy, is more than up to scratch.

There really isn’t an abundance of choice both around and inside the stadium itself with a strong congregation of restaurants located just north of the stadium including a KFC, Tesco Metro, Subway and Frankie & Bennys in addition to numerous independent places which do Italian and Indian cuisine.

The Shrimps have a club shop at Mazuma Stadium in addition to their own official online site. The opening times for the store at the ground are as follows:

Convoluted, huh? To clarify these times and to check availability of stock feel free to phone the store on 01524 411797 or send an email to [email protected]

It doesn’t appear as if Morecambe FC currently offer fans the chance to undertake a stadium tour of Globe Arena. If this changes we’ll be sure to update this section.

How to buy Morecambe Tickets

Tickets to see The Shrimps can be purchased via the usual methods such as telephone (01524 411797), email ([email protected]), in person at the Mazuma Stadium club shop and on the internet by visiting Morecambe’s e-ticketing site.

Concessions apply to seniors over 65 years old, for those who are registered disabled (with carer) and those in full time education. Family tickets for 2 adults and 2 children or for just 1 adult are available for all stands.

How to get to Mazuma Stadium

Where is Mazuma Stadium?

Mazuma Stadium’s address for satnav is as follows:

Whilst there is a car park outside Mazuma Stadium it’s spaces are reserved for use of the players, staff, guests and the visiting team with Stewards instructed to turn any car around without a valid ticket with no parking permits ever sold on the day of the match.

Instead, the club recommend that visitors use Westgate Primary School which is on Langridge Way less than 450 yards from Morecambe’s stadium with 260 spaces available.

Whilst money does not go to the club, the school is a very good cause and it ensures that local roads don’t descent into chaos on matchdays.

Morecambe railway station is exactly 1 mile away from Mazuma Stadium, with the resulting journey likely to take around 20 minutes or so by foot.

When looking for a hotel in Morecambe you will find that the majority of them are located near the coast with The Clifton and Glenthorn hotels two examples. There is also a Travelodge fairly close to the train station which might sit some.

Who plays at Mazuma Stadium?

English side Morecambe play their home matches at Mazuma Stadium.

What is the capacity of Mazuma Stadium?

As of 2021 Mazuma Stadium has an official seating capacity of 6,476 for Football matches.

When was Mazuma Stadium opened?

Mazuma Stadium officially opened in 2010 and is home to Morecambe

What is the postcode for Mazuma Stadium?

The postcode for Mazuma Stadium is LA4 4TB.

Covid Restrictions may be in place when you visit Mazuma Stadium in 2021. Please visit the official website of Morecambe for full information on changes due to the Coronavirus.