The Richoh Arena is the home ground of current League one side Coventry City Football Club for the 2015 season after the Sky Blues reached an agreement with the local council after disagreements about the cost and length of lease which saw them move out in the previous season.

Coventry City first moved into the Ricoh Arena at the start of the 2005/2006 season, having previously played their home matches at Highfield Road for the past 106 years.

Requiring a more modern stadium, with better transport infrastructure, the decision to build a new ground was made as far back as 1997 by ten chairman Bryan Richardson.

With planning permission granted during the early months of 1999, the Sky Blues anticipated a move in time for the 2000/2001 season, however the project was delayed by almost four years.

After being relegated from the Premier League, the club found it more difficult to obtain finance, and thus it wasn’t until September 2002 that the last remaining gas holder on the proposed site was finally removed.

By the time building work commenced, the scope of the project had once again changed and plans for a World-Class 45,000 capacity were now scaled down to 32,500. Reliant on England’s bid to host the 2006 Fifa World Cup, the amount of public funding decreased and combined with poor league standings it made sense to lower the capacity.

On Friday the 6th October 2006, Coventry’s stadium did however get a taste of international football after England played Germany in an Under 21s Euro Championship match.

Officially known as the Ricoh Arena after the Japanese electronic company signed a 10 year sponsorship deal, for the 2012 Olympics Games it was known as the commercially neutral “City of Coventry Stadium”.

Originally owned by Coventry City Council and the Higgs Charity before Wasps purchased it in October 2014, Coventry City were at one stage embroiled in a rent dispute with the operators Arena Coventry Limited.

Relocating to Northampton’s Sixfields Stadium at the start of the 2013-2014 season, the club made a return to the Ricoh Arena the following season after intervention from the Football League.

Below is a seating plan of Coventry City's Coventry Building Society Arena: 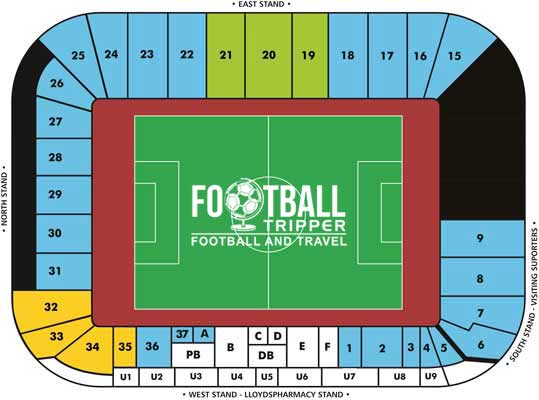 The Ricoh Arena is a modern stadium with uniformity in appearance across stands although there are some slight variations between the North, East, South and West sections.

Seating for away supporters is normally allocated within Blocks 6 and 7 of the south stand, although if there is greater demand for seats this is extended to sections 8 and 9 as per the above diagram.

One estimate suggest that the away allocation is anywhere between 2,500-4,000 seats, although many clubs in League One, or indeed the Championship would generally fail to fill this.

Situated within the corner of the ground behind the goal, The Ricoh Arena is a curious place to visit for traveling supporters.

As one of the newest stadiums in the country fans come with high-expectations, but these aren’t always lived up to with a small number of fans arguing that the seats are uncomfortable and excessively far back from the pitch for all the steepness of the stand.

Regardless of subjective experiences, the views from every seat in the Ricoh are unobstructed and the ground has decent acoustics on matchday courtesy of the design. This usually makes for a decent atmosphere.

With the exception of the Grosvenor Casino which has a welcoming bar to both sets of supporters on matchday, the out-of-town location of Coventry’s Ground makes it rather arduous for those intent on visiting multiple pubs before and after kick-off.

The Ricoh Arena does in fact boast two places itself which allow you to drink outside of the concourses (The Aylesford Pub and Bar 1883), although some fans still opt to park further away and visit Foleshill Road next to Coventry canal before kick-off.

Around 15-25 minutes away from the ground the area has a handful of watering holes of varying quality such as the J.K Indian Grill and Bar, The Three Horse Shoes and the popular The Coach & Horses.

Next to the stadium is the Arena Park Shopping Centre which has a wealth of fast food options such as Burger King, Greggs and Subway with restaurants including Chiquito, Frankie & Benny’s and Pizza Hut.

There is even a Starbucks and Tesco’s Supermarket which can also provide fans with a lighter option for lunch.

Inside the Ricoh Arena there is a Costa Coffee, and Singers Bar & Bistro which is perfect to grab a bit to eat before the match.

Each concourse is well stocked with the usual fan favourites such as Burgers, Pies and Hot Dogs.

Coventry FC operate a club shop (CCFC Superstore) at Gallagher Retail Park on Stoney Stanton Road (CV6 5QQ) in addition to their own official online site,  CCFC Retail Shop. The opening times for the store at the ground are as follows:

For more information, to confirm opening times or to check availability feel free to phone the store on 024 76 992326.

The club will likely announce details of an actual store at the Ricoh Arena soon.

It doesn’t appear as if Coventry currently offers fans of the club the chance to undertake a stadium tour of The Ricoh Stadium.

How to buy Coventry City Tickets

Tickets to see the Sky Blues can be purchased in advance at the CCFC Superstore at Gallagher Retail Park (CV6 5QE), via phone (02476 992326) or most popularly online from the CCFC Ticket Shop.

Advance tickets for League One are priced below with matchday price also listed in brackets:

How to get to Coventry Building Society Arena

Where is Coventry Building Society Arena?

The Stadium is conveniently located within the district of Longford on the northern side of Coventry city less than 1 mile from the M6 motorway and a few hundred metres from the A444.

Richoh Arena’s address for satnav is:

Located out of town Ricoh Arena boasts three car parks totalling around 2,000 spaces which is more than enough for most lower league football matches:

Coventry central railway station is approximately 4 miles south of the Ricoh Arena, with Bedworth Station actually closer to Coventry’s stadium at a distance of around 2.8 miles.

However due to the poor transport links and the fact that it still leaves you with long distance away which will still take you 1 hour to walk you’re better off just sticking to Coventry.

There is the De Vere Hotel located within the environs of the Ricoh which is undoubtedly the closest with the Hotel Novotel Coventry on the M6 Junction 3 coming second in the proximity stakes, although it would likely require a car.

The rest of your accommodation options are to be found back in Coventry City Centre with The Squirrel B&B and the Ibis Hotel close to the train station.

What is the capacity of Coventry Building Society Arena?

As of 2023 Coventry Building Society Arena has an official seating capacity of 32,609 for Football matches.

What is the postcode for Coventry Building Society Arena?

The postcode for Coventry Building Society Arena is CV6 6GE.

Covid Restrictions may be in place when you visit Coventry Building Society Arena in 2023. Please visit the official website of Coventry City for full information on changes due to the Coronavirus.