Last renovated in 2001, the 12,000 capacity venue is occasionally used for music concerts with Elton John being the most notable performer to date.

The first match officially played by A.F.C Bournemouth at Dean Court was on the 1st September 1923 when an estimated 7,000 fans witnessed a 0-0 draw against Swindon Town. Before this The Cherries, were known as Boscombe F.C and the club first moved into Dean Court in December 1910 after taking longer than expected to clear the former gravel pit.

Previously owned by the Cooper-Dean family, the name of Bournemouth’s stadium is said to derive from the former owner, although in recent years it has come to be known by a number of sponsorship names.

From the start of the 2001-2002 season onwards it was officially known as the Fitness First, then Goldsands and now Vitality Stadium.

The largest ever attendance at Dean Court was set on 2nd March 1957 against Manchester United in an FA Cup match. 28,799 fans crammed into Dean Court to watch the match, with the league attendance set almost a decade early in 1948 when 25,495 fans witnessed a disappointing 1 nil defeat to Queens Park Rangers.

Originally furnished from old fittings from the British Empire Exhibition Stadium, the ground was entirely rebuilt in 2001, with the project so large in scale that the club were forced to play their first eight fixtures of the season at Dorchester’s Avenue Stadium. The extensive renovation saw the pitch rotated 90 degrees to limit the impact on nearby housing.

Initially consisting of just three stands like Oxford’s Stadium, a decade after opening a temporary south stand was erected during the 2010-2011 season.

Removed the season after, a permanent section of seating was built after the club were promoted to the Championship for the 2013/2014 season resulting in today’s current capacity of 12,000.

Below is a seating plan of Bournemouth's Vitality Stadium: 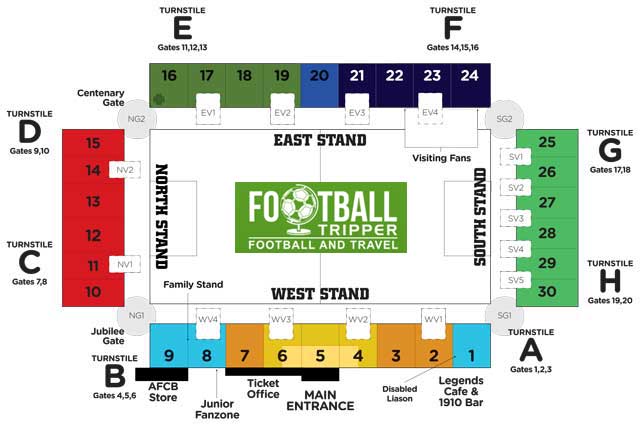 Away fans visiting Bournemouth are housed within sections 21-24 in what is currently known as the Energy Consulting East Stand.

Running for the length of the pitch opposite the main stand, the standard allocation of around 1,500 seats means that away supporters share the East Stand with Cherries fans.

The allocation can sometimes increase to around 2,000 or so for the larger matches or cup games where the numbers are more generous.

As one would expect from an intimate stadium, the views throughout are generally superb, and entrance is gained through turnstile F.

If there has to be one negative for away fans, you could argue that the range of catering options and facilities within the concourse including the toilets are somewhat spartan, although they are pretty much on par with other smaller grounds in England.

From both Pokesdown and Bournemouth railway stations, generally speaking, the closer you get to the coastline the more pubs you should encounter.

The A35 Christchurch Road is probably the best middle point between Goldsands Stadium and the Gold sands of the beach with a large and popular Wetherspoons known as Sir Percy Florence-Shelley which permits both home and away fans in reasonable quantities.

For home fans or for those wearing neutral colours there is a supporters bar at the ground known as “1910” as well as The Queens Park Hotel which is five minutes from the ground on Holdenhurst Road.

Sticking with the aforementioned Christchurch Road where Pokesdown station is located on is probably your best bet food wise.

There are a number of cuisines represented here ranging from Italian to Indian, and carnivorous to vegetarian, with a Sainsbury’s supermarket at the end of the road for good measure.

Bournemouth club shop is located near the entrance to the stadium on Thistlebarrow road on the corner where the North and West Stands meet.

Alternatively you can purchase AFC Bournemouth merchandise from their official online store.

The club store has the following opening times:

It doesn’t appear as if AFC Bournemouth currently offer fans the chance to undertake a stadium tour of Vitality Stadium.

How to buy Bournemouth Tickets

You can purchase tickets to watch the Cherries through all the usual channels such as Online, via telephone (0844 576 1910) and in person at either the club store or either the BIC or Pavilion ticket offices.

Premier League Ticket prices are as follows, and represent anywhere between a £5.00 – £7.00 price increased compared to historic Championship prices:


How to get to Vitality Stadium

Where is Vitality Stadium?

The stadium is located around 2.4 miles from Bournemouth city centre but as it is a coastal town which is rectangular in shape, it could be much closer depending on your starting point.

Dean Court’s Stadium address for satnav is as follows:

The Cherries operate a supporters’ car park located behind the new south stand available on matchdays for the bargain price of just £1.00.

Sadly there is limited space so be sure to get there well before kick-off if this is your plan A.

Bournemouth Central Station is around 30 minutes from The Cherries’ ground with this station acting as the main railway hub of the town – you’re likely to travel into here and then catch a smaller train to Pokesdown which is only 1 mile from the ground.

The two closest hotels to Dean Court are the Queens Park Hotel and The Portman although neither seem to have many reviews which gives away any positive or negative traits.

Within Bournemouth sea front there are hundreds of accommodation choices with the unadventurous Travelodge and Best Western Hotel a good bridge between Bournemouth railway station, the sea and the stadium.

Who plays at Vitality Stadium?

English side Bournemouth play their home matches at Vitality Stadium.

What is the capacity of Vitality Stadium?

As of 2022 Vitality Stadium has an official seating capacity of 11,364 for Football matches.

When was Vitality Stadium opened?

Vitality Stadium officially opened in 1910 and is home to Bournemouth

What is the postcode for Vitality Stadium?

The postcode for Vitality Stadium is BH7 7AF.

Covid Restrictions may be in place when you visit Vitality Stadium in 2022. Please visit the official website of Bournemouth for full information on changes due to the Coronavirus.