Ewood Park is a football ground located in the Lancashire city of Blackburn.

Home to the local football team Blackburn Rovers F.C since 1890, the 31,367 capacity stadium hosted matches in the inaugural season of the Premier League and the club’s title winning season in 1994/1995.

Blackburn Rovers officially moved into Ewood Park in 1890, however records suggest that the site had been previously used to host football matches for just under a decade when it was known as Ewood Bridge.

Although Blackburn didn’t take up permanent residence until the start of the 1890-1891 season, they had used the venue a handful of times before including for a match against Sheffield Wednesday on 9th April 1881.

Initially built as a multi-purpose sports venue which hosted events ranging from athletics to greyhound racing, Ewood Park slowly rose to prominence for football after hosting an early International friendly between England and Scotland in 1891.

After a section of the ground collapsed under the weight of the large crowd attracted for Everton, the club hired Archibald Leitch to design a more sturdy and larger stand.

Just before the onset of the Second World War, Ewood Park has grown and was said to be capable of accommodating 70,886 fans, a number which included over 7,000 seats.

The record attendance was set in a derby against Bolton Wanderers in 1929 when 62,522 fans entered the stadium. To inaugurate the new floodlights in 1958 Blackburn Rovers held a friendly against Werder Bremen.

Ewood Park would remain unchanged until 1984 when the Nuttall Street Stand was rebuilt after suffering fire damage in the off-season. After the high-profile Bradford City fire which resulted in 56 deaths a year later, the club demolished and rebuilt the Riverside Stand in 1987.

Jack Walker, future Chairman, donated the steel for the new stand after widespread concerns about the use of wood as a safe building material.

The Blackburn and Darwen End two-tier stands opened by February 1994 and five months later, the modern form of Ewood Park was complete after the Jack Walk Stand was completed. The club marked the occasion by thrashing Nottingham Forest 7 nil as defending champions of the Premier League.

Below is a seating plan of Blackburn Rovers's Ewood Park: 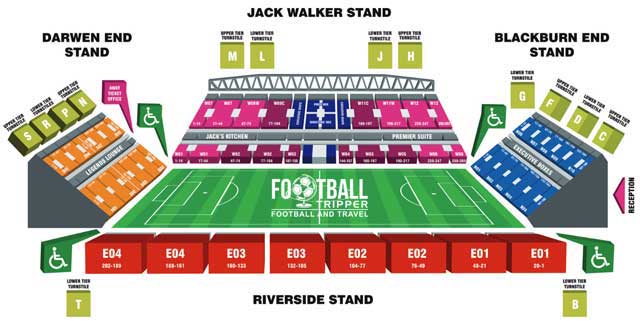 Away fans who visit Blackburn’s Stadium are housed within the Bryan Douglas Darwen End which occupied the space behind the southernmost goal.

Fully covered with unrestricted views, this goal-end consists of two-tiers, with the standard allocation of around 4,000 tickets taking up around three quarters of the entire stand.

The remaining quarter is usually shared with home supporters who wish to brave the noise from the away fans, and if the occasion demands it such as high-profile FA matches, then the entire Bryan Douglas End is assigned to visiting supporters which significantly boosts the number of tickets available.

Tickets for the away section can sometimes be purchased on the day of the match at the ticket office located between the Darwen End and the Jack Walker Stand.

Availability depends on the levels of interest for the match, and it is much easier to purchase a ticket since Blackburn have been relegated to the Championship.

The closest bipartisan pub to Ewood Park is the bar inside The Fernhurst Lodge which bills itself as a “Family friendly pub serving food”.

This is located less than 10 minutes south of the ground on the Devishly named A666 Bolton Road. Predictably it can get quite busy on matchdays so get there early.

Failing this you have The Golden Cup which is located quite a bit further along this road near to the M65.

Mostly uphill, it isn’t the most pleasant of walks, and unless you have a car or have just exited off of the M65 I would probably give this one a miss.

For those catching the train there is a large Wetherspoons outlet near to Blackburn railway station known as the Postal Order, amongst a handful of other small watering holes.

Close to the north-west side of the ground there is a McDonald’s and an Iceland, with the main Bolton Road the most likely place to get some cheap takeaway food.

At the ground you can purchase the usual range of matchday options such as Sausage Rolls and Burgers for around £3 or so.

If you are coming in from Mill Hill Station there is better choice with numerous Chippies and Kebaberies located on New Chapel Street which will take you almost to the ground.

Within the centre of Blackburn there is also a lot of choice amongst the chain restaurants.

Blackburn operate two club stores within the city in addition to their online store: https://www.roverstore.co.uk/

Blackburn typically offer a stadium tour of Ewood Park to the general public two times a month, with the tour usually starting at 11.00am.

Costing just £7.50 for adults, £4.50 for concessions and £16 for a family ticket for 2 adults and 2 children, a behind the scenes visit of Ewood Park is the perfect day out for fans of the Rovers.

If you have enough people the club may arrange your own tour at a date of your choosing, otherwise the standard dates require a minimum of 6 people in total in order.

This detail is however for the organisers to worry about and not the person simple looking to undertake a tour.

To find out more information and to book your place on the tour you can either phone the club on 01254 296110, email them [email protected] or you can book online.

How to buy Blackburn Rovers Tickets

Tickets can either be purchased Online, in person at the club shops or via the ticket hotline on 087 12221444 and email ([email protected]), with Blackburn operating a four tiered pricing structure with higher profile matches naturally resulting in a higher ticket prices for fans.

Listed in order of price from Category A+, A, B and C, the ticket prices for Championship are as follows:

How to get to Ewood Park

Where is Ewood Park?

Ewood Park is located approximately 2 miles south of Blackburn City centre across the Leeds and Liverpool Canal within the north-west England county of Lancashire.

Matchday parking is available on the day at Ewood Park subject to availability at Car Parks H, F and B with a cost of just £10.00 per vehicle.

Blackburn train station is exactly 1.5 miles away by foot with Mill Hill (Lancashire) station nearly half the distance of this, at around 0.8 miles.

The journey from Mill Hill to Ewood Park will likely take you around 20 minutes and it involves heading south down New Chapel Street, New Wellington Street and crossing the Leeds and Liverpool Canal to join Livesey Branch Road.

Both stations are served by direct trains from Manchester Victoria, Salford Crescent and Preston.

The closest hotel to Blackburn’s ground is the popular Fernhurst Lodge which is  less than 10 minutes south on the A666 Bolton Road.

If you have a vehicle the Premier Inn is located just off of the M65 and allows for a quick getaway in the morning otherwise the remaining accommodation options are within the centre of Blackburn.

There aren’t really any hotels near to Mill Hill train station meaning that you would have to make your way  slightly further east with the Hill View Hotel & Guest House popular with fans.

Who plays at Ewood Park?

What is the capacity of Ewood Park?

As of 2023 Ewood Park has an official seating capacity of 31,367 for Football matches.

When was Ewood Park opened?

What is the postcode for Ewood Park?

The postcode for Ewood Park is BB2 4JF.

Covid Restrictions may be in place when you visit Ewood Park in 2023. Please visit the official website of Blackburn Rovers for full information on changes due to the Coronavirus.