The Liberty Stadium, home to Swansea City is an all-seated football ground with a capacity of 20,750. It’s often one of the smallest in the Premier league, however in Wales it is the third largest behind Cardiff City and the Millennium Stadium.

Swansea City first moved into the Liberty Stadium at the start of the 2005/2006 season, with the first competitive game held against League One rivals Tranmere Rovers.

Christening the stadium with a 1 nil victory, The Swans had a fantastic inaugural season at Liberty Stadium making two appearances at the Millennium Stadium, with a victory against Carlisle United to lift the Football League Trophy in one and a defeat against Barnsley in the play-off final in the other.

It’s staggering to think just how far Swansea City has come in the last decade, with the club reaching the dizzying heights of the Premier League in 2011 – the first Welsh club to do so, three seasons ahead of rivals Cardiff City.

A large part of the club’s success is undoubtedly down to the Liberty Stadium, however the club weren’t able to finance the move themselves.

Swansea had previously played at Vetch Field since forming in 1912, and the 12,000 capacity ground was wholly inadequate for modern day elite-level sports.

Fortunately Swansea Council saw the plight of the current sports teams in the city and teamed up with a developer-led consortium, build a multi-purpose 20,000 capacity arena which they could all use.

Located on the banks of the River Tawe, the stadium was constructed as part of a wider retail complex which cost an estimated £50 million, with more than half of this cost covering the stadium alone.

Commonly known as “White Rock” during construction, the name Liberty Stadium is actually derived from sponsorship rather than any local or historical meaning.

The record attendance was set against Arsenal on the 9th November 2014 and the club are currently exploring the viability of expansion after successfully consolidating their place in the Premier league.

During the same season the record was set, it was the second smallest ground behind QPR’s 18,000 capacity Loftus Road.

Below is a seating plan of Swansea's Liberty Stadium: 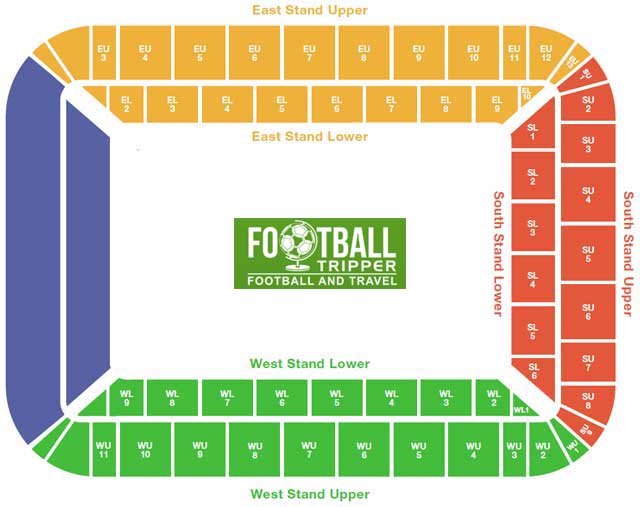 The four parts of the liberty stadium are named after points on the compass: North, East, South and West.

The two closest places which seem to permit both home and away supporters are Frankie & Bennys Italian-American restaurant, and the Harvester known as Morfa Parc.

Despite being traditionally viewed as restaurants, they’re both equipped with decent sized bars, and are located towards the south-west of Liberty Stadium.

Otherwise, or in addition to, more pubs can be found within Swansea city centre with a lot of choice on Wind Street.

Pronounced “Wined” street (Perhaps appropriately), there are numerous pubs to visit here including Bank Statement, Yates’s and The No Sign Bar which specialises in real-ales.

Inside the ground you can also get pints of Carling and Worthington, with the concourse open to fans around 90 minutes before kick-off.

Outside the stadium there is a smallish retail parkto the east of River Tawe which has a few fast food staples such as KFC and Pizza hut.

The western side also has independent eateries such as Rossi Original Fish & Chips, Pizzeria Vesuvio, and Indian Flavours.

The nearby Morfa Parc Harvester and Frankie & Bennys can also be used for their proper function, rather than just for a drink.

Otherwise you can choose to get something once inside the concourse, or back within the train station at the city centre.

Fans of both the Swans and Ospreys are given the chance to visit the normally restricted access areas of Liberty Stadium by booking a stadium tour.

Fore more information such as prices you can send an email  to [email protected] or try phoning the club on 01792 616402.

How to buy Swansea Tickets

For the Premier League Swansea use a two-tier pricing system based on the profile of the opposition.

How to get to Liberty Stadium

Where is Liberty Stadium?

Liberty Stadium is located a mile and a half away, north of the main urban centre and railway station.

The average Football Tripper should be able to walk to the ground in well under 30 minutes.

Liberty Stadium’s address for satnav is as follows:

Parking options around the stadium are limited to the use of residential permits, and the retail park forbids you from staying there more than a few hours which is far from ideal.

Some fans suggest driving past the stadium, and passing under the bridge in order to find “normal” street parking which will leave you with a 10-15 minute walk from the stadium.

Alternatively you could park within the city centre and depending on your budget, get a taxi in.

Another new option which is beginning to grow in popularity is the Park and Ride facility at the Felindre Old Steel Works site.

This offers parking and a shuttle bus for the cheap price of £6.00. Located off of Junction 46 from the M4, the bus journey to the stadium will take you 20 minutes and it is away fan friendly with buses segregated by support.

Swansea Railway Station is served via connections to London Paddington by First Great Western and to Manchester Piccadilly by Arriva Trains Wales.

The Liberty Stadium is around two miles from the main station and there isn’t an additional train service which takes you further along, meaning you have the choice of either walking the 25-30 minute walk, hitching a taxi or jumping on the bus.

Swansea Airport (Maes Awyr Abertawe in Welsh) is located on Fairwood Common, 6 miles South West of the city centre which will take an estimated 20-25 minutes by car.

Liberty Stadium lacks hotels within it’s immediate vicinity but by travelling south towards the the city centre you will find more than enough choice with the likes of Windsor Lodge Hotel, two Premier Inns and The Grand Hotel which is right outside the train station for maximum convenience.

Who plays at Liberty Stadium?

English side Swansea play their home matches at Liberty Stadium.

What is the capacity of Liberty Stadium?

As of 2022 Liberty Stadium has an official seating capacity of 20,750 for Football matches.

When was Liberty Stadium opened?

Liberty Stadium officially opened in 2005 and is home to Swansea

What is the postcode for Liberty Stadium?

The postcode for Liberty Stadium is SA1 2FA.

Covid Restrictions may be in place when you visit Liberty Stadium in 2022. Please visit the official website of Swansea for full information on changes due to the Coronavirus.