Prenton Park is a purpose built football stadium located in the Borough of Wirral in Merseyside. Home to both Tranmere Rovers F.C and the reserve team of Liverpool Football Club, the 16,567 capacity ground first opened in 1912 and was last majorly renovated back in 1995.

Tranmere Rovers FC purchased the plot of land which would become their stadium three years after their formation in 1887 from Tranmere Rugby Club.

The ground was initially known as “The Borough Road Enclosure”, with the name Prenton Park adopted in 1895 after a suggestion from the letters page of the Football Echo. Local historians are however quick to point out that the stadium is technically located in the more working class area of Tranmere rather than Prenton itself.

The installation of floodlights in 1958 is seen as a key part of the development of the club’s fanbase with manager Dave Russell advocating the playing of home games on Friday evenings rather than Saturday afternoon.

This allowed fans to see The Rovers as well as top division teams Everton and Liverpool in action. This continued until the 1990s and many fans still support Tranmere in conjunction with one of the larger Liverpudlian based teams, with Liverpool FC even opting to use Prenton Park for reserve fixtures from 2009 onwards.

As for developments at the stadium, many have been implemented in a reactive manner to changes in Footballing Legislation such as the 1985 Sports Ground Act which saw the capacity reduced from 18,000 to 8,000. The more locally resonating Taylor Report of 1990 saw Tranmere convert three of their stands from terracing to all seating at a cost of £3.1 million in 1995.

Below is a seating plan of Tranmere Rovers's Prenton Park: 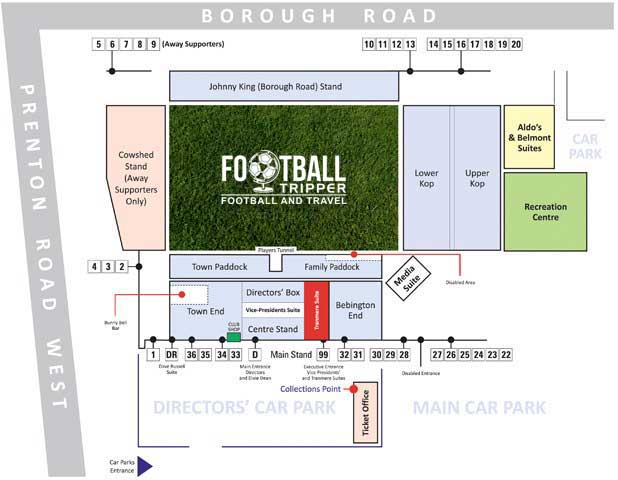 Away Fans are herded into the Northern Stand known colloquially as the Cow Shed. Sitting opposite the intimidatingly large Kop Stand, the away section which is asymmetrical in design looks quite meager but in reality it is still probably larger than a lot of other club’s stands, with room for up to 2,500 fans.

Inside the concourse there is a bar which sells alcohol and the facilities are good with the Cow Shed actually being one of the more modern sections of Prenton Park.

Ticket prices for away fans travelling to Prenton Park for the 2015 season are as follows:

The most popular watering hole with away fans is usually the bar within the Prenton Park Hotel due to its close proximity to the Cow Shed and spacious interior.

Elsewhere around the ground two other choices are the Sportsmans Arms and the Halfway House which are situated no more than 10 minutes east and west of the ground respectively.

Within the immediate environs of the ground there are numerous takeaway places to get a cheap bite to eat from such as Captain Tony’s Pizza & Pasta, Hursts Bakery, Khans Takeaway and the plainly named Kebab House.

There are also a handful of supermarket between Prenton and Rock Ferry such as The Co-operative and Tesco Express which offer slightly healthier options, as well restaurants such as the Sombrero Mexican Bar & Grill plus numerous Curry Houses like Ruhi Balti.

Inside Prenton Park itself there is the usual fare on offer such as Hot Dogs, Pies and Cheeseburgers, with the club even selling a “double” which is surely more than enough for any man to handle at half time.

Tranmere operate a club shop at Prenton Park in addition to their own official online site, The TRFC E-Shop.

Please note that during May the shop is not open on Saturdays, and after midweek home games the shop will open the next day at the later time of 10.30 am. To clarify opening times or to check stock you can phone the store on 0871 2212001 option 2 or send an email to [email protected]

It doesn’t appear as if Prenton Park currently offer fans the chance to undertake a stadium tour of Tranmere Rovers FC. If this changes, we’ll be sure to update this section.

Prenton Park is located in the town of Birkenhead which falls under the Metropolitan Borough of Wirral in Merseyside, North-West England.

From the North (Liverpool):

From the city centre travel through the Kingsway (Wallasey) Mersey Tunnel and after paying the £1.50 toll booth charge for cars continue on the M53 to Junction 3. Take the first exit signposted as Birkenhead and continue for approximately a mile passing Sainsbury’s supermarket on the left hand side – you should remain the right hand lane at all times. Turn right at the set of traffic lights at the Halfway House pub, continue for 500 yards to the next set of traffic lights. Finally turn left onto Prenton Road West with the ground appearing in front of you.

Visiting Tranmere from the south you will likely be using one of the following stretches of road: M6, M56 and M53 to J4. Take the fourth exit from the roundabout onto the B5151 known as Mount Road and Continue for two and a half miles after the road becomes Storeton Road. Turn right onto Prenton Road West at the set of traffic lights and then the ground will greet you on the right-hand side 200 yards further down the road.

There is a decent sized car park located at the ground which you can use for £5 with season ticket holders having access to the car park at a price of £90 for the season. The club discourages parking within the residential areas as there are exisiting parking schemes in operation and it it can be hard to tell whether or not it is “safe” to park there.

For travelling fans Liverpool Lime Street is the station you’ll probably be using to transfer across the River Mersey to Birkenhead. Tranmere Rovers ground is located less than 1.7 miles away from this town with 3-4 stations such as Conway Park, Birkenhead Central and Green Lane all essentially in walking distance. The closest however is Rock Ferry which is a 15 minute walk away.

The closest hotel to the ground is undeniably the Villa Venezia which is located to the north of the stadium on Prenton Road itself with rooms starting at around £60.  Back towards Woodchurch Road there is the Halfway House Hotel which is also one of the recommended Pubs above.

Other than the above two you’re probably better off looking at hotels in nearby Liverpool.