The Macron Stadium is a multi-functional football ground located in Metropolitan Borough of Bolton, Greater Manchester.

Formerly known as the Reebok Stadium between 1997 to 2014, the 28,723 capacity ground has now signed a four year deal with Italian sportswear company Macron.

The inaugural fixture at the new Stadium was held on the 1st September 1997 against Everton, with the game resulting in a 0-0 draw after an opening ceremony conducted by John Prescott, who at the time was the deputy Prime Minister.

Resulting in a 0-0 draw it wasnâ€™t until just over three weeks later on the 23rd September in a match against Tottenham Hotspsur that Boltonâ€™s first goal in a competitive fixture was scored.

Constructed as a multi-purpose arena to primarily be used for football, The Reebok had a planned capacity of 29,000 however some of the seats were lost to stewarding and crowd control.

Although crowds were high in the opening season, the record attendance of 28,353 was set on 28th December 2003 in a Premier league match against Leicester City. Five years later many predicted a sell-out against Atletico Madrid in the UEFA Cup however it only attracted 26,163 fans.

Inspired by Huddersfieldâ€™s John Smithâ€™s Stadium which opened in 1994, the designers Populous adapted its famous gabled architecture into a fully-enclosed bowl-style stadium. Costing an estimated ÂŁ25 million to build, the ground is situated out of town within Middlebrook Retail Park in Horwich.

Previously Bolton Wanderers had played at Burnden Park, however after the publication of the Taylor Report in 1990 which enforced mandatory seating, the ground was no longer sustainable.

First built in 1895, the effects of the new proposal greatly resonated greatly with the club as Burnden Park suffered its own stadium disaster in 1946 when 33 fans died during an FA game against Stoke City.

Today, the ground is known officially as The Macron Stadium after Bolton signed a four year partnership with the Italian sportswear brand in July 2014.

This ended the previous 17 year association with Reebok who had purchased the naming rights to the ground upon opening. Some fans still inadvertently refer to it as The Reebok Stadium however.

View of University of Bolton Stadium

Below is a seating plan of Bolton Wanderers's University of Bolton Stadium: 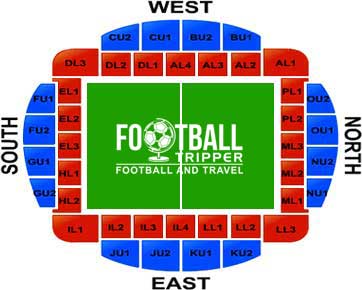 The Macron is comprised of the following four sections: North, East, South and West which is the main stand.

University of Bolton Stadium Away End

Traveling supporters who visit the Macron Stadium are housed within the southern stand which is a two-tiered construction, capable of seating around 6,000 fans in total if the occasion demands it.

Otherwise by default, around 3,000 tickets are up for grabs with the lower-tier often shared with some home supporters.

With the upper-tier remaining reserved entirely for the visiting supporters, tribalism is somewhat preserved, and the curvacious interior of the ground helps to amplify the noise generated by both sets of fans, in what I could only rather inaccurately describe as being ever so slightly like the Sydney Opera House.

As one of the newer, purpose-built football grounds in the country, the Reebok or Macron as it is now known really is a great example to other clubs.

Whilst it does admittedly make a trade-off with the fabled benefits of an inner city location, the levels of comfort and space are much greater than other grounds of a comparable size.

The â€śgenericâ€ť pubs around the stadium can sometimes be hit and miss for away fans, with some supporters noting that they are often manned by bouncers who check tickets and vigilantly weed out anyone who isnâ€™t a home fan.

Obviously it depends on the pub and match, so thereâ€™s no harm in testing these reports by popping into the Harvester between Horwich Parkway and the ground, and seeing if you get served.

With the numerous restaurants now located in the shopping centre, youâ€™d suspect that one of these contains a bar which will welcome a small group of well-behaved fans.

Otherwise, the nearest traditional pub is The Barnstromers located south-east of Macron stadium on Cranfield Road, or waiting until youâ€™re inside the concourse.

Located out of town, the best bet besides Macron stadium for food is at the nearby shopping centre known as Middlebrook Retail Centre.

There is a plethora of options ranging from restaurants such as Nandos, Bella Italia, Pizza Hut and Harvester to more affordable fast food options choices such as KFC, Subway, McDonalds and Costa Coffee.

The club shop is located at the stadium next to the car park within the wider Middlebrook Retail Centre.

Known as Bolton Central, the shop has the following opening times regardless of matchdays:

Alternatively there is the clubâ€™s official online store for all your Trotters paraphernalia: https://www.bwfcdirect.co.uk/

Bolton Wanderers proudly offers fans the chance to go behind â€śOne of the finest stadiums in Europeâ€ť by undertaking a tour of the Macron.

Lasting over 60 minutes, and costing ÂŁ7.50 for adults and just ÂŁ4 for everybody else, discounts are available for groups between 10-25 people with tours typically running on Monday, Tuesday and Thursday at 11.00 am.

There is also a Sunday 1.00 pm slot available but you are advised to check with the club shop when booking or the person you book with via telephone (0844 871932).

Availability and access will be restricted on matchdays or if another event such as a concert is planned at the ground.

How to buy Bolton Wanderers Tickets

You can purchase tickets to see Bolton play either online, in person at the Bolton Central store, via phone 0844 871 2932 or even via fax and traditional post.

Tickets are priced into different categories depending on the opposition with the club operating a three-tiered price structure ranging from cheaper matches (Category C) to the more high-profile matches (Category A).


How to get to University of Bolton Stadium

Where is University of Bolton Stadium?

The Macron Stadium is located in Middlebrook Retail Park in Horwich within the Metropolitan Borough of Bolton in Greater Manchester.

It is situated out of town approximately 5 miles west of Bolton city centre.

Macron Stadiumâ€™s address for satnav is as follows:

There are numerous car parks located at the Macron Stadium which operate on a first come first serve basis with prices set at ÂŁ7.00 for cars, ÂŁ12.00 for Mini-Buses and ÂŁ20.00 for coaches:

Each car park opens from 8.00 am on matchdays with disabled parking spaces for blue badge holders located in car parks A (Away fans) and C (Home supporters).

Bolton train station is located 5 miles East of Bolton Wandererâ€™s ground but thankfully there is the smaller Horwich Parkway Station which is used to access both the ground and nearby shopping centre.

Connected to Bolton town centre, Horwich Parkway has rail services operated by Northern Rail with trains directly to both Manchester Piccadilly and Victoria.

Hotels Near University of Bolton Stadium

The closest hotel to the stadium is actually within the Macron Itself, with the Bolton White Hotel actually integrated inside the South Stand!

The second closest to the ground is the Premier Inn which is located next to the the smaller Bolton Arena towards the South West of The Macron.

One which is probably more suitable for those with a car (although it is still walkable) is another Premier Inn, this time 0.7 miles East of the stadium on the A6027 roundabout.

Back within Bolton itself there are of course other hotels such as The Travelodge which is within walking distance of the main train station.

Who plays at University of Bolton Stadium?

English side Bolton Wanderers play their home matches at University of Bolton Stadium.

What is the capacity of University of Bolton Stadium?

As of 2022 University of Bolton Stadium has an official seating capacity of 28,723 for Football matches.

When was University of Bolton Stadium opened?

What is the postcode for University of Bolton Stadium?

The postcode for University of Bolton Stadium is BL6 6JW.

Covid Restrictions may be in place when you visit University of Bolton Stadium in 2022. Please visit the official website of Bolton Wanderers for full information on changes due to the Coronavirus.