Portman Road Stadium has been the home of Ipswich Town F.C since 1884, with the ground witnessing the club’s famous League Title victory back in the 1961-62 season.

Renovated in 2002, the 30,311 capacity ground has a stand named after iconic footballing figure, Sir Bobby Robson.

Portman Road has been the home ground of Ipswich Town F.C since 1884, making it one of the oldest grounds in Britain which is still in use today.

Previously in the club’s formative years, the Tractor Boys had played at Bloomhill Park however the facilities were regarded as being better at Portman Road as it had a pavilion courtesy of the cricket club.

It wasn’t until 1936 that Ipswich Town would become professional, and the inaugural league match was played on 27th August 1938 against Southend United. At this point the cricket club left the ground, and stadium began to develop solely as a footballing ground with the capacity peaking at just under 40,000 in the 1970s.

The record attendance of 38,010 was set against Leeds United in the 1974 world cup, however the Safety of Sports Grounds Act which was introduced the following year reduced this to 34,600.

To counter this The West Stand was expanded in 1980 at a cost of £1.3 million with the help of Pioneer who purchased the naming rights.

This move backfired however as it plunged the club into debt, forcing the club to sell some of its star player to cover the costs and the publication of the Taylor Report in 1990 inadvertently dated the work.

After the ground was fully converted to all-seating in the early 1990s, Portman Road stayed as it was until the club earned promotion to the Premier League in 2000.

Receiving a financial windfall in television rights and increased gate receipts, £22 million was invested in rebuilding the north and south stands which gave Portman Road an improved 30,000 capacity.

As for the future of Ipswich’s ground there are currently neither any plans for redevelopment or relocation. There is a lot of history preserved within the four stands of Portman Road, and for a lot of fans it would be a shame to lose it.

This is why the move to rename stands after Sir Bobby Robson and Sir Alf Ramsay in recent years have proved popular with fans.

Below is a seating plan of Ipswich Town's Portman Road: 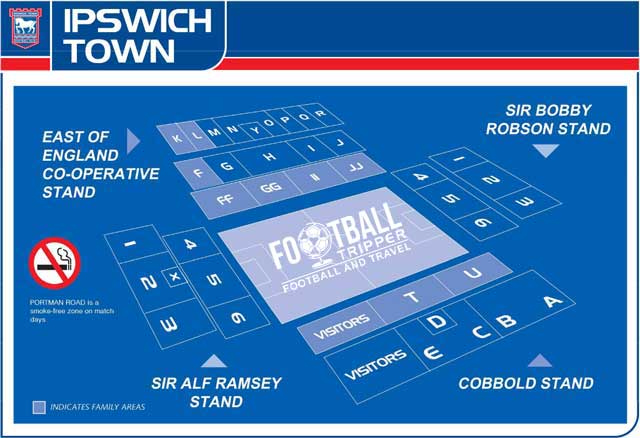 Away fans who make the trip to Ipswich’s ground are housed within the aging Cobbold Stand which runs for the length of the pitch on the eastern side along Portman Road.

Consisting of two unevenly split tiers, visiting supporters occupy the larger section of the stand within the second tier which is capable of seating 1,900.

Shared with some sections of the home faithful, the Cobbold Stand’s age manifests itself in a number of ways, most notably in the relative lack of leg room within each row of seats compared to some of the newer grounds.

The dates would suggest that it was once former terracing and even with support pillars, views for the majority of fans remain unobstructed.

As one of the classic British stadiums, Portman Road has that distinctively historic feel to it which seems to induce fans to make as much noise as possible.

The concourses and kiosks selling fast food are on the whole, although infrequently some visiting fans complain of over-zealous stewarding which can slightly dampen an otherwise top day out.

Ipswich FC recommends two pubs specifically for away supporters although they are also suitable for home fans as well. The first is The Riverside Hotel which is outside Ipswich Station on the southern bank of the River Orwell,

The second is The Punch and Judy 10 minutes away from the ground, across the river, in Cardinal Park. Nearby there is also a Harvester restaurant which has a bar.

For home fans there are a few pubs right within the vicinity of the ground such as the Drum & Monkey, and Rileys Pool & Snooker Club, with alcohol also on sale inside the ground itself.

Within 10 minutes south-east of the ground there are a number of fast-food choices ranging from McDonald’s to KFC, and Coffee Republic to Subway.

The centre of town also has plenty more options but unless you have lots of time to kill before or after the match, it probably isn’t worth venturing there.

At Portman Road there is the club run megastore known as The Planet Blue Store. Between this and the Ipswich Online Store, all of your Tractor Boy merchandise needs should be taken care of.

The Planet Blue Store has the following opening times:

Billed as “one of East Anglia’s finest sporting venues”, the stadium tour of Portman Road is an excellent opportunity for fans of the club and football in general to take a behind-the-scenes look at an iconic English stadium.

Starting at 7.30pm on Monday evenings approximately once every 2 weeks, the tour takes in off-limits areas such as the players’ changing rooms, the board room, the Champions Lounge and even the pitch itself.

How to get to Portman Road

Where is Portman Road?

Portman Road is located on the northern bank of the River Orwell pretty centrally within the town of Ipswich, less than 0.3 miles away from the main railway station.

Ipswich Town FC regrets to inform fans that there is a lack of parking within the immediate vicinity of the stadium with the only solution being the numerous Pay and Display car parks within the wider town area.

Ipswich railway station is located less than half a mile away from the ground south of the River Orwell with a walking time of around 5 minutes for the average fan.

Upon exiting the station cross the bridge and walk past two sets of traffic lights/croasroads and then turn left into the famous Portman Road.

There is a frequent service to London’s Liverpool Street Station with trains departing every 15 minutes or so during peak times.

There is a cluster of 4 or 5 hotels located back across the River Orwell near to Ipswich station less than 10 minutes from Portman Road: The Ramada Encore, The Riverside Hotel and The Chequers.

East of the city area, the Neptune Arena is quite popular with tourists and well-to-do residents, with a few hotels located nearby including a Premier Inn, and Travelodge.

Who plays at Portman Road?

What is the capacity of Portman Road?

As of 2023 Portman Road has an official seating capacity of 30,311 for Football matches.

When was Portman Road opened?

What is the postcode for Portman Road?

The postcode for Portman Road is IP1 2DA.

Covid Restrictions may be in place when you visit Portman Road in 2023. Please visit the official website of Ipswich Town for full information on changes due to the Coronavirus.