Highbury Stadium, not to be confused with Aresnal F.C’s former stadium, is the home ground of Lancashire based football team Fleetwood Town.

Owned by the local Wyre Borough Council, the 5,327 capacity ground first opened in 1939.

Fleetwood Town first moved to their current Highbury Stadium at the start of the Second World War in 1939, after previously playing on a pitch located next to North Euston Hotel.

Not to be confused with Arsenal Stadium which was commonly referred to as Highbury, Fleetwood Town’s ground inherited its name from the nearby Highbury Avenue on which it sits on.

Representing a period of the club’s most successful years, Fleetwood moved to a higher quality pitch located next to Memorial Park hoping that the club could sustain its level of early achievements.

Unfortunately, the quality of the matchday experience declined somewhat and the club never were able to build on their early successes. Between 1948 and 1952 Highbury became used for Motorcycle Speedway competitions, and thus a track encircled the perimeter of the pitch.

This greatly reduced the intimacy of the arena, and sight-lines available from the terraces which were then known as “Scratching Sheds”.

This left the original Highbury Stadium with an unfortunate legacy, and it wasn’t until 2008 when the new West stand was constructed that the last remaining trace of the Speedway Track had been removed.

Reportedly builders had to excavate over 5,000 tonnes of material, but it ultimately proved worth it after proximity to the pitch was achieved across all four stands.

This redevelopment came as part of a three phase stadium plan which Fleetwood Town announced on the 31st July 2007. The first and second phases saw the construction of new goal-end terraces for the north and south, and the third phase saw the addition of the new marque main stand.

Costing £2 million pounds in total, the creation of the Percy Ronson Terrace in 2007 remarkably represented the first new stand to be constructed at Highbury since 1939.

Below is a seating plan of Fleetwood Town's Highbury Stadium: 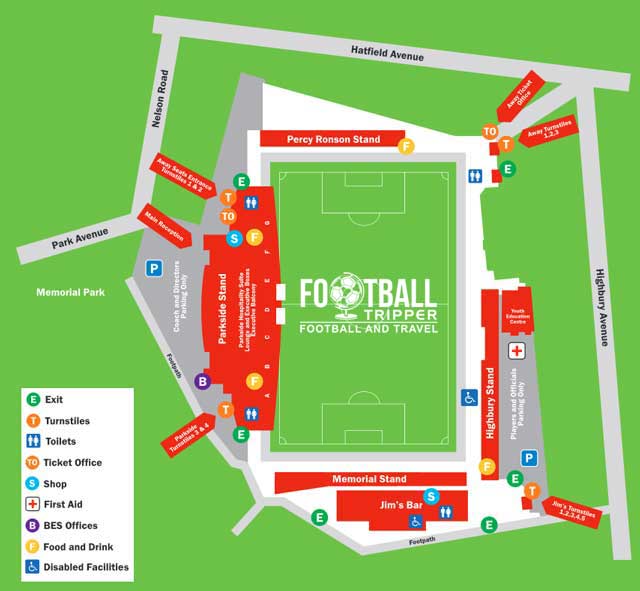 Fleetwood’s Highbury has four stands: The Memorial Stand (North), The Parkside Stand (East) which is the main stand , The Percy Ronson Stand (South) which is all terracing, and Highbury Stand (West) behind Highbury Avenue.

Away fans are housed in both the Parkside Stand (seating) and the Percy Robson Stand (standing), with the sections of the stands effectively constituting the north-west corner of the ground.

The modern terrace is capable accommodating 621 fans, whilst the less popular seating area has room for 210 visitor although it’s still good to offer people the choice.

Away tickets can either be purchased from the visiting club’s website or on the day of the match providing tickets are still available, and you’re happy paying slightly more.

Be warned that the turnstiles are automated which means you can’t purchase a ticket there, you need to go to the ticket office located near the away entrance.

At the stadium there is the informal sounding “Jim’s Bar” which is purpose-built and opened in October 2008 with both sets of fans allowed to mingle before and after the game.

The entrance is located down the alleyway at the rear of the memorial stand, with the bar stocking a large range of draught and bottled beers with occasional special offers.

Jim’s Kitchen also serves a decent range of hot and cold food with the bar boasting no less than 17 televisions and a free to use cash machine within.

They’re not called the cod army for nothing and towards the southwest corner of the stadium on Hatfield Avenue is the popular “Highbury Chippy” which serves fish and chips with a McDonalds and Asda Supermarket located near the end of the Amounderness Way, 5-10 minutes north-east of the stadium.

Inside the stadium there are numerous kiosks selling the typical range of hot food and cold drinks, in addition to the Red & Whites restaurants.

The Fisherman operate a club shop at Highbury in addition to their own official online site,  Highbury Store. The opening times for store at the ground are as follows:

It doesn’t appear as if Fleetwood Town FC currently offer fans the chance to undertake a stadium tour of Highbury Stadium (Fleetwood).

How to buy Fleetwood Town Tickets

Tickets to see Fleetwood play at home can be purchased via the usual channels such as at the ticket office in the BES Parkside Stand Monday to Friday 9.00 am to 5.00 pm, via telephone 01253 775080 or on the internet from Fleetwood Town’s Online Box Office.

The club encourage fans to book in advance via offering a small discount on tickets of a few pounds compared to if you were to buy an equivalent ticket on the same day.

How to get to Highbury Stadium

Where is Highbury Stadium?

Highbury Stadium is located on the Fylde Peninsula  8 miles north of Blackpool surrounded by the Irish Sea to the west, Morecambe Bay to the North and the River Wyre to the east.

The town of Fleetwood is located in Lancashire, north-west England.

Highbury Stadium’s Address for satnav is as follows:

There isn’t a dedicated car park at the stadium save for the club and disabled fans, with Fleetwood Town encouraging street parking on surrounding roads.

Technically the closest station is Poulton Le Fylde but Blackpool North is much more convenient and located only slightly further away at a distance of with 7.5 miles versus 6.5.

As the larger train station there are better range of transport options to get to the ground starting with the taxi rank outside. The cabs can fit up to 6 people with a journey costing just under £20 with a duration of 25 minutes.

This may be suitable if there are 4-5 of you or if there are other fans you can group up with otherwise, the options below are probably a better bet.

With the exception of the Broadwater Caravan Park when looking for a hotel in Fleetwood you should always be looking at the northern part of the Fylde Peninsula with the North Euston Hotel being the pick of the  limited bunch.

You can also look for hotels around Blackpool.

Who plays at Highbury Stadium?

What is the capacity of Highbury Stadium?

As of 2023 Highbury Stadium has an official seating capacity of 5,327 for Football matches.

When was Highbury Stadium opened?

What is the postcode for Highbury Stadium?

The postcode for Highbury Stadium is FY7 6SP.

Covid Restrictions may be in place when you visit Highbury Stadium in 2023. Please visit the official website of Fleetwood Town for full information on changes due to the Coronavirus.