Broadfield Stadium or Checkatrade.com Stadium for sponsorship purposes is the home ground of League One side Crawley Town F.C.

Crawley Town first moved into Broadfield Stadium at the start of the 1997-1998 season having previously spent the past 48 years at Town Mead which was located approximately 2 miles away.

Built at the end of Brighton Road, 1 mile from Crawley Railway Station and close to junction 11 on the M23 Motorway, the new Broadfield Stadium benefited from much improved transport links.

Owned by Crawley Borough Council and leased back to the club, the publicly owned facilities were a step up from the old ones at Town Mead.

The new ground was comprised of two all-seating stands which run for the length of the pitch, and two goal-end terraces which offer fans an optimal mix of standing and comfort.

Currently the ground has a capacity of 6,134 which is the second smallest in League One going into the 2015 season.

Only ahead of Fleetwood Town’s Highbury Stadium, the average capacity for the division is around 16,738, and even by League Two standards, Broadfield is comparatively small as the average there sits at 9,965.

Working with the council, Crawly Town constructed a new 2,000 all-seater stand towards the eastern side of the pitch in January 2012.

Completed four months later on 2nd April 2012, the new capacity ensured that the club met the leagues minimum requirement of a 5,000 capacity stadium.

On 1st September 2013, Crawley Town announced that Broadfield would officially be known as Checkatrade.com Stadium after the club announced a five year sponsorship deal.

Below is a seating plan of Crawley Town's Broadfield Stadium: 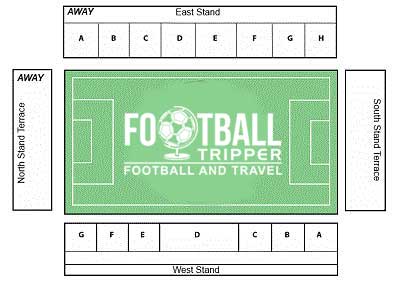 The stands at Broadfield stadium are named after the points of the compass: North which is a small terrace for away fans, East which is all seating, South which is a home terrace behind the goal and West which is the main stand of the ground.

The majority of away fans are contained within the KR-L Stand which is a goal-end terrace located towards the north end of the pitch.

Although it is capable of accommodating around 1,600 fans there isn’t really a standard allocation as it is adjusted on a game by game basis depending on the size of the visiting club.

With a low-roof which is appears to box in supporters, it is reminiscent of parts of Kingsmeadow, and the simple configuration of standing places divided by a safety barrier helps to generate a decent atmosphere on matchday.

A handful of place are also available for both disabled supporters and visiting fans who wish to sit within the West Stand.

From the short walk from the train station to the ground there are a handful of options en route starting with the Railway Pub at the top of the A2219 Brighton Road. Heading further south fans could turn right onto Goffs Park Road and proceed along for less than five minutes to get to a Brewers Fayre pub and restaurant.

By proceeding straight along Brighton Road you will eventually come to the New Moon Pub just past Hilltop Primary School which is probably the closest pub to the ground, less than five minutes away.

Slightly further away and more off the beaten track is the Downsman which is either accessible by turning right onto Southgate or Wakehurst Drive.

As well as numerous pubs located in the centre of town, at the Checkatrade Stadium there is the “Redz” Bar which welcomes away supporters. This is located behind the Bruce Winfield Stand to the south.

Whilst there are a good number of places to stop and have a pint, the same can’t be said for food en-route to the Checkatrade, although the pubs will of course have food options on the menu.

Within Crawley Town Centre there are numerous options with a McDonald’s located less than five minutes from the railway station amongst other things.

Otherwise you’re best off just grabbing some food at Broadfield Stadium, with Crawley selling the standard range of fast food options such as hot dogs and sausage rolls.

Finally, if you turn right onto the Downland Drive past the New Moon Pub there is a Tesco Express which might be of interest to some fans.

Crawley Town have a club shop at Broadfield as well as their own official online site,  Crawley Town Shop. The opening times for the store at the ground are listed below:

For more information, to confirm opening times or to check availability feel free to send an email to [email protected] or phone the store on01293 410 000.

It doesn’t appear as if Crawley Town FC currently offer fans the chance to undertake a stadium tour of Broadfield Stadium.

How to buy Crawley Town Tickets

Tickets to see Crawley Town can be bought in person at the ticket office at the Checkatrade.com Stadium (9.30 am – 4.00 pm), using the telephone ( Dial 01293 410005), via email ([email protected]) or most popularly online from Crawley’s online box office.

How to get to Broadfield Stadium

Where is Broadfield Stadium?

Checkatrade Stadium is located just over 1.1 miles from Crawley city centre, next to Broadfield East Jr school and the A23 known as Brighton Road.

Crawley Town FC really go above and beyond the provision of parking spaces on matchdays with the club operating their own 350 space car park at the stadium in addition to two other nearby locations.

At the stadium spaces are served on a first come first served basis at a price of £5.00 per vehicle. There are an additional 350 spaces located in Broadfield Business Park near the offices of William Reed and Novo Nordisk with Stewards dutifully guiding cards to available spots.

Lastly there are 90 spaces available for cars located at KPMG and Bard Ltd at the Tilgate Forest Business Centre which is on the southern side of the A2210 Brighton Road, with all three car parks helpfully signposted for fans.

The club hopes this means visiting fans won’t park on residential streets and or grass verges on matchdays – it’s really not worth having your car clamped!

Crawley Train Station is located 1.2 miles of the Checkatrade.com Stadium with the resulting journey on foot taking approximately 25 minutes.

Upon exiting the station proceed eastwards on Station way and turn left at the Taj Mahal Indian Restaurant.

Follow the A2219 Brighton Road for around 1 mile and then when it finished turn right onto Southgate Avenue, cross the roundabout and you will be at the stadium.

All of your accommodation options are located back within Crawley Town centre with the Barrington Lodge on the A2219 Brighton Road easily the closet hotel.

Back towards the city centre there is a Travelodge, Ramada Crawley-Gatwick and right outside the train station there is the Arora Hotel.

Who plays at Broadfield Stadium?

What is the capacity of Broadfield Stadium?

As of 2022 Broadfield Stadium has an official seating capacity of 6,134 for Football matches.

When was Broadfield Stadium opened?

What is the postcode for Broadfield Stadium?

The postcode for Broadfield Stadium is RH11 9RX.

Covid Restrictions may be in place when you visit Broadfield Stadium in 2022. Please visit the official website of Crawley Town for full information on changes due to the Coronavirus.