Dating back to 1913 the 16,315 capacity venue is primarily used for the home matches of Peterborough United who are a lower league football team.

London Road Stadium first opened way back in 1923 in a form which would have been largely unrecognisable from today’s ground.

In the club’s formative years The Posh relied on the local council to improve the stadium, and it wasn’t until Peterborough purchased London Road from the council in the 1950s that the ground really increased in size. The first development took place in 1953 and saw the redevelopment of Moy’s End Terrace.

A year later London Road End was also made into a fully-covered terrace, and at the start of the 1957-1958 season a new 2,404 all-seater stand was constructed. Replacing the previous wooden structure, the gap which now existed between the pitch and the all-seater stand was now replaced by sections of terracing.

London Road remained distinctly old school until the club earned promotion to the First Division in 1992.

Occurring in the wake of high profile stadium disasters and after the publication of the Taylor Report in 1990, Peterborough were required to construct more seating as football was about to enter the modern era which essentially banned standing at top-flight games.

Towards the end of the 1995-1996 season, a new marque stand was completed. Capable of seating 5,000 fans across two-tiers, this currently represents the most modern redevelopment at London road.

This may soon change howeveras the club carried out demolotion work on the Moy’s End Terrace in December 2013 in order to pave the way for a new all-seater stand.

Below is a seating plan of Peterborough United's Weston Homes Stadium: 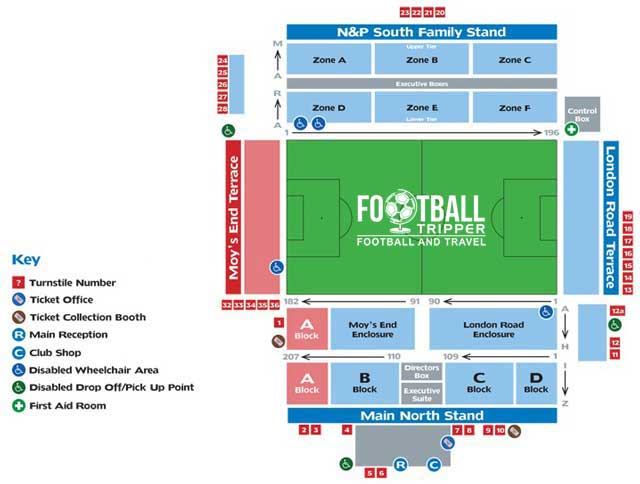 Away fans continue to share the Main Stand with home fans, with the standard allocation of around 1,800 seats pushed towards the relatively new Moy’s End Stand which to many people feels like a more suitable place for the visiting fans to support their team from.

Perhaps due to the age of the old stand Peterborough would rather offer their owns supporters the chance to experience the more modern facilities, but from an atmospheric point of view it would perhaps be better if the fans were separated.

On the whole views from the historic north stand are more than satisfactory but it should be noted that there are two support beams which may pose problems for some fans depending on where they are sat.

The facilities such as the toilets within the concourse do feel rather dated, and the upper tier of the main stand remarkably still has wooden seats in place!

For any fans traveling from the centre of town there is a decent number of “proper” pubs located enroute to the stadium starting with the Drapers Arms which is less than five minutes from Peterborough railway station.

As you proceed along the A15 you will encounter plenty of other pubs including the Park Inn Radisson, with the Charters Bar located after you cross the River Nene very much popular when the weather is nice.

Charters Bar is housed on a former Dutch Barge and is a Camra listed pub which stocks over a dozen real ales on tap, and the owners allow fans to take their drinks outside and enjoy them on the banks of the river.

The second most popular pub for both sets of fans is probably The Cherry Tree which is a 19th century pub located on Oundle Road less than 10 minutes from the ground.

Also less than a few hundred yards southwest of Peterborough’s ground is the conveniently placed Peacock Pub which can get very busy on matchdays, with the Posh Pub located in the north stand being the official watering hole of the club.

There is a KFC west of the stadium on London road which is popular on match days and a Burger Bar which does a roaring trade outside the ground.

Peterborough FC operate a club shop at their London Road Stadium, an occasional mobile shop unit within the city centre and their own e-commerce site,  The Posh Online Store.

During days when there is a home match the club shop will reopen for around 30 minutes after the full time whistle.

It doesn’t appear as if Peterborough United FC currently offer fans the chance to undertake a stadium tour of London Road Stadium.

How to buy Peterborough United Tickets

Tickets to see Posh play at home can be purchased via the holy triumvirate of telephone (0844 847 1934), in person at the stadium ticket office and online from Posh Tickets.

How to get to Weston Homes Stadium

Where is Weston Homes Stadium?

London Road stadium is located on the southern bank of the River Nene, Peterborough, approximately half a mile from the traditional city centre.

Due to ongoing redevelopment at the ground the car park is currently out of access to non-members of the club with Peterborough encouraging fans to park at the Pleasure Fair Meadow Council and Railworld car parks instead.

These are located opposite the stadium adjacent to the Town Bridge on Oundle Road and cost a few quid max.

Peterborough Railway Station is located exactly 1 mile north of London Road on foot and this short journey will take you no more than 20 minutes, although there are taxis available if you would prefer.

On London Road itself there is the Queensgate Hotel which is essentially 60 seconds from the stadium just past The Peacock Pub, and slightly further away at around the 5 minute mark there is Clarks Guest House/ B&B Peterborough.

The remaining accommodation options lie north of the River Nene back towards Peterborough city centre with the highly rated Great Northern Hotel right next to the train station.

Who plays at Weston Homes Stadium?

What is the capacity of Weston Homes Stadium?

As of 2023 Weston Homes Stadium has an official seating capacity of 15,315 for Football matches.

When was Weston Homes Stadium opened?

What is the postcode for Weston Homes Stadium?

The postcode for Weston Homes Stadium is PE2 8AL.

Covid Restrictions may be in place when you visit Weston Homes Stadium in 2023. Please visit the official website of Peterborough United for full information on changes due to the Coronavirus.