The Madejski Stadium is multi-purpose sports venue located in the city of Reading, Berkshire.

Home to Reading Football Club and the London Irish Rugby Union Team, the 24,161 capacity stadium opened in 1998 and has been a hit with fans ever since.

After Reading were crowned Champions of the Second Division during the 1993/1994 season the club gained promotion to the first division which was now the second highest-tier in English football following the creation of the Premier League.

This meant that Reading’s Stadium was now subject to the stadium safety legislation of the Taylor Report which was published in 1990 after the events of Hillsborough.

The club’s then stadium, Elm Park, was required to become all-seating, however this proved to be impractical as it would have severely limited the capacity.

Dating back to the late 19th century when it first opened, the ground was designed with terraces and standing in mind, and any redevelopment would have been so extensive that Reading believed that they might as well build a new stadium.

After acquiring a piece of land on a former landfill site for £1.00 on the condition that they construct a new A33 relief Road, Reading formulated plans for a new 25,000 capacity venue.

Located south of Reading city centre within Green Park Business Park, the club followed the template of the modern football stadium which was situated out of town.

Costing a total £50 million, Reading Chairman John Madejski, who the stadium is named after, reportedly contributed around half of this figure to the project.

After rescuing the club from receivership, Madejski presided presided over one of the most successful periods in the club’s history, after The Royals played Premier League for the first time during the 2006-2007 season.

Although there have been talks of expanding The Madejski in the future to anywhere between 30,000-38,000, the likelihood of this happening seems very slim as The Royals have so far failed to hold down a consistent Premier League place.

For now the record attendance sits at 24,184 which was set against Everton on 17th November 2012.

Below is a seating plan of Reading's Select Car Leasing Stadium: 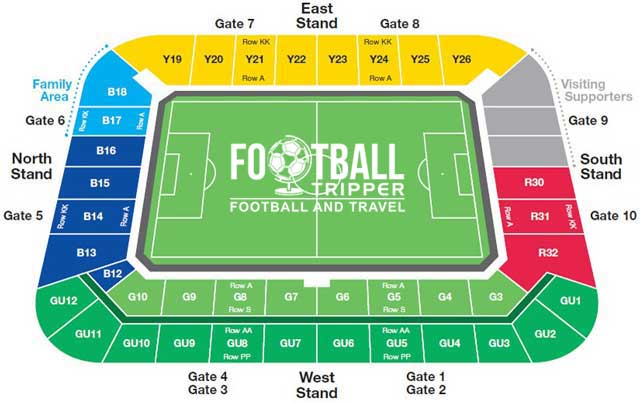 Reading’s ground is comprised of the following four sections: North, East, South and West which is the main stand.

Supporters who watch their team take on Reading away from home are usually housed in the South Stand which is located behind one of the goals.

The standard allocation for most league matches is around 2,100 although for the more high-profile matches this can essentially be doubled to around 4,300 which pretty much takes up the entire central block, excluding the two corner pockets of seating.

Practically identical to the north stand, the away section is a single-tiered construction covered by an extensive cantilever roof which shields the entirety of the Madejski stadium from the elements.

First opened in August 1998, it is very much a modern stadium and although some may argue that it feels slightly generic with a slightly soulless location, there are lots of benefits including comfortable seatings, decent views, and acoustics.

Whilst there aren’t an abundance of pubs nearby, the concourse inside the ground is well-sized with plenty of kiosks and standard food options to consider.

Located within a retail park there is a distinct lack of “proper” boozers but there are a few establishments one can drink from whether you are a home or away supporter.

The first is the bar at the Holiday Inn which is across the A33 dual-carriageway to the south-east of the ground, the second as recommended by the club is The World Upside Down Bar on Basingstoke road.

Nearby to the train station within the town centre there is the popular Three Guineas Pub which has an unassuming exterior and a decent selection of real ales on the inside, as well as the smaller “Alehouse” which bills itself as a “small pub with intimate nooks & crannies”.

There are also plenty of other choices around the town, otherwise you can drink at the stadium itself.

Located within Reading Gate Retail Park there is a solid choice of franchise options including the likes of McDonalds, Pizza Hut and KFC in addition to the usually slurry of options at the Madejski.

Within Reading city centre there are also plenty of choice on offer including the likes of Subway and Greggs less than five minutes from the station.

At the stadium there is the club run a Megastore where fans can purchase the latest kits, and branded accessories, in addition to the official online Store, Reading Direct.

Opening times are as follows:

Fans of the Royals have the chance to gain temporary VIP access to the Madejski when they undertake the fully guided Reading FC stadium tour.

Taking in such restricted access areas such as the directors’ lounge, the players’ dressing room and the managers dugout, tours cost £12 for adults, and £7 for everyone else, and usually run twice a month depending on levels of demand.

To book your place on the tour and to find out more information and the latest dates you can either phone the ticket office on 0118 968 1313, send an email to [email protected] or visit the online tour booking page.

How to buy Reading Tickets

Tickets to see Reading FC play at home can be purchased via the usual channels such as via telephone (0118 968 1313), at the ticket office or club shop at the stadium and most popularly online via the club’s online box office.

As tickets are only released for the next 5 or so matches at a time, it’s impossible to offer a comprehensive pricing guide for home matches unlike our other English guides.

If we have access to any new information we’ll be sure to update.

How to get to Select Car Leasing Stadium

Where is Select Car Leasing Stadium?

The “Mad Stad” is located in the Berkshire based town of Reading, approximately 3 miles south of the city within an out of town shopping centre known as Reading Gate Retail Park.

The Madejski stadium’s address for satnav is as follows:

Despite being located out of town in a moderately sized retail park there are limited parking spaces available to the general public on matchdays with the club prioritising spaces for disabled supporters, and those with children under 8.

If you are using this car park then the club advised you to use the Northern Way entrance near to B&Q and from there the car park attendants will guide you to a parking space.

For a full list of recommended off-site car parks please visit this page but the main ones are as follows:

The closest railway station is technically Reading West but this is only slightly further from the better served Reading (Main) so its slightly proximity advantage (0.2 miles) is essentially redundant.

Overall Reading railway station is located exactly 2.7 miles north of the Madejski with the resulting walk likely to take anywhere between 50 minutes to 60 minutes.

Should you wish to walk rather than taking the excellent shuttle bus, the journey is relatively straight forward. Reach the A329 main road and follow it southwards as it become the A33.

Reading FC’s ground is located near the shopping and retail park near the Bennet Road roundabout where there is a KFC and McDonalds.

Within the vicinity of the ground there is the Millenium Madejski Hotel which is in an unbeatable location although for many people, a very beatable price.

The remaining options all belong to the big three with a 2 AA Rosette 4 Star Merit Holiday Inn Reading M4 Jct10 located 10 minutes or so off the A329(M).

North of the stadium on the A38 and the parallel Baskingstoke road there is a Travelodge and Hilton.

What is the capacity of Select Car Leasing Stadium?

As of 2023 Select Car Leasing Stadium has an official seating capacity of 24,161 for Football matches.

What is the postcode for Select Car Leasing Stadium?

The postcode for Select Car Leasing Stadium is RG2 0FL.

Covid Restrictions may be in place when you visit Select Car Leasing Stadium in 2023. Please visit the official website of Reading for full information on changes due to the Coronavirus.