Het Kuipje is a multi-purpose football stadium located in the city of Westerlo which belongs to the municipality of Antwerp. Home to occasional Pro League team K.V.C. Westerlo, the Kuipke stadium has a current capacity of 7,982 and is located next to numerous training pitches.

Het Kuipje Stadion is named after Feyernoord’s stadium in Rotterdam, traditionally known as De Kuip which translates as “The Tub”. As K.V.C Westerlo’s stadium has a capacity just over 8,035 compared to Feyenoord Arena which is the second largest stadium in Netherlands with a capacity of 51,117, it is known as Het Kuipje which means “The Little Tub”.

Owned by the Municipality of Westerlo which has an estimated population of just 24,497 as of 2013, it’s easy to see why Stadion Het Kuipje’s capacity remains at a comparatively small 8,035.

Unlikely to break any capacity records any time soon or awards for innovation, Westerlo’s stadium is actually one of the few stadiums in Belgium with undersoil heating, having installed the equipment in time for the 2008/2009 season.

As one of three stadiums in the league to have this luxury alongside Stade Maurice Dufrasne and the Cristal Arena, Het Kuipje can also proudly claim to be one of the first grounds in the country to remove spectator fences in order to give football fans a better view of the action on the pitch which makes the atmosphere on matchdays even more intimate.

Outside the stadium, there are six football fields which are used by both KVC Westerlo and the Belgian public. The highest level of football contested at Het Kuipje came in qualifying matches for Europe’s second tier competitions. The 2001/2002 season saw Westerlo lose to Hertha Berlin in UEFA Cup qualifying and during the 2011/2012 season, the club again lost against BSC Young Boys in a Europa League qualification match. 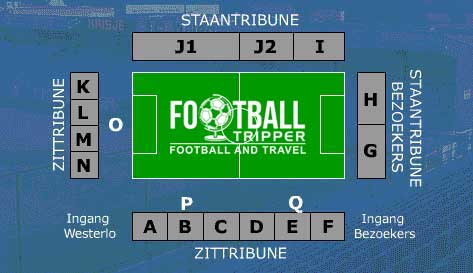 Tickets for visiting fans cost €20.00 for a seat within Block A and €12.50 for a uncovered place where the majority of fans choose to stand. The standard allocation sees 280 seats in the grandstand available to the travelling supporters and up to 750 places in the tribune.

The Fan shop at the stadium opens once a week on Mondays between 8.00 pm to 9.00 pm during the football season otherwise it remains closed.

Matchdays are obviously an exception to this, and the A-Core Fan store is open for 1 hour before kick-off, at half time, and then for 30 minutes after the full time whistle.

Guided tours of the facilities at Het Kuipke cover pretty much every area of Westerlo’s stadium and generally last between 30 to 45 minutes.

Stadium tours generally run on an ad-hoc basis which means there isn’t a set schedule and you should email [email protected] to find out availability.

Information regarding the tours is fairly limited on the official page and doesn’t make reference to cost or minimum group sizes.

How to buy Westerlo Tickets

Tickets to see KVC Westerlo chill in the tub can be purchased before kick-off from the stadium’s box office as the club don’t appear to do online or telephone ticket sales.

How to get to Het Kuipje

Het Kuipje sits exactly 1.1 miles east of the centre of Westerlo along the De Merodedreef main road which is capable of taking you all the way to the stadium.

Although there are various bus stops along the way, the average Football Tripper could easily walk the to KVC’s stadium in well under 15 minutes.

There is limited matchday parking available at Het Kuipje with the stadium only featuring one on-site car park. You will likely have to explore the nearby residential area to find a space to park followed by a short stroll.

Although regarded as a suburb of Antwertp, Westerlo actually lacks it’s own railway station and tram stop.

Antwerp International, approximately 43 km north-west is the closest major airport to the municipality of Westerlo. Another alternatively is Brussels Airport which is 55 km to the west.

Across the road from Westerlo’s football ground there is the De Zandberg Hotel which is a cheap and no thrills place to stay with a two star rating.

Sadly the only other option in the town is Hotel Geerts which is almost the opposite at four stars and nearly twice the price.

Who plays at Het Kuipje?

Belgian side Westerlo play their home matches at Het Kuipje.

What is the capacity of Het Kuipje?

As of 2022 Het Kuipje has an official seating capacity of 8,035 for Football matches.

When was Het Kuipje opened?

Het Kuipje officially opened in 1933 and is home to Westerlo

What is the postcode for Het Kuipje?

Covid Restrictions may be in place when you visit Het Kuipje in 2022. Please visit the official website of Westerlo for full information on changes due to the Coronavirus.