Stade de Suisse Wankdorf Bern is the home ground of Swiss Super League team BSC Young Boys, and is currently the second largest stadium in the country, with approximately 7,000 capacity less than Basel’s St Jakob-Park. First opened in 2005, The ground replaced the old Wankdorf Stadium and was used as a venue for the Swiss-Austrian hosted Euro 2008.

Constructed across a two year period starting in 2003, Stade de Suisse officially opened on the 30th July 2005 with the inaugural match held two weeks prior in what the organisers called “an infrastructure test”. Limited to just 14,000 tickets, Young Boys entertained Olympique Marseilles in an entertaining 3-2 defeat in preparation for the upcoming 2005/2006 season.

Constructed in order to be one of the Swiss venues of Euro 2008 which was co-hosted with Austria, the 32,000 capacity ground staged three Group C Matches including three Netherlands matches against Italy, France and Romania. Before the tournament Stade de Suisse gained experience of hosting big matches when FC Thun used the venue for their home matches during the 2005/2006 Champions League and subsequent match in the UEFA Cup.

During the group stages Stade de Suisse Wankdorf welcomed the likes of Ajax, Sparta Prague and eventual tournament finalists Arsenal. As Thun finished 3rd they qualified for the knock-out stages of the UEFA Cup and this time Stade de Suisse hosted another European match against German side Hamburg. Young Boys failed to progress to the group stages of this competition during this period after failing to win their qualification matches during for consecutive seasons.

Today, Stade de Suisse remains the second largest stadium Switzerland ahead of FC Basel’s St. Jakob Park and continues to be regarded as one of the best mid-sized venues in Europe. Intended to be used as the Swiss national stadium, the use of artificial turf has prohibited the team’s regular usage of the stadium with natural grass laid to meet UEFA regulations during the 2008 tournament. It is also famous for being environmentally friendly, as the roofs are covered in Solar Panels.

Below is a seating plan of Young Boys's Stadion Wankdorf: 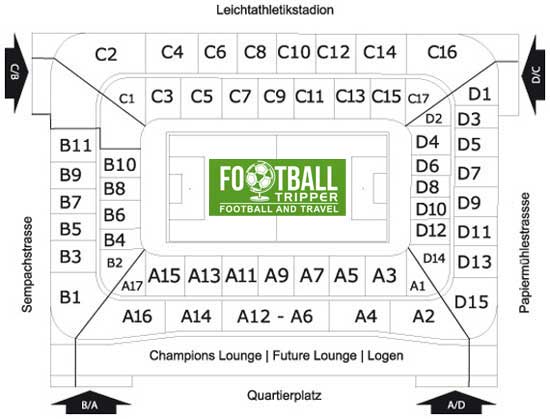 Based on the Europa League match between BSC Young Boys and Everton back in February 2015, away fans are usually housed within the north-west corner of the stadium in the area which is unlabelled in the seating plan we posted above.

Young Boys operate a Fanshop at the stadium’s main entrance at the Wankdorf Center  in addition to their complimentary online store which is practically open 24/7. Opening Hours:

Whilst the YB Fan Shop will always be open on matchdays, please be advised that you can no longer purchase tickets from there, and you should instead use the box office!

Stadium tours of Stade de Suisse lasting 45 minutes are available in three different formats: basic tour, a technology tour and a catering tour. Most football fans will wish to undertake the basic tour as it focuses on the sporting side of things rather than the infrastructure and service industries.

Departing from the Wankdorf Clock just outside restaurant Eleven, tours must be booked seven days in advance by either phoning the office on 031 344 88 20 or sending an email to [email protected]

How to buy Young Boys Tickets

Tickets to see The Young Boys in action can be purchased for 90 minutes before kick-off from the box office, from Ticketcorner sales points throughout the city, as well as online via the official website.

Please note that the above prices are based on a single adult ticket, and will likely fluctuate depending on your age, and which team you are seeing in action. The prices are for illustrative purposes only and to give you an approximation of tickets.

How to get to Stadion Wankdorf

Stade de Suisse is situated within the Wankdorf district of Bern, located less than 3km from the historic city centre. As it’s such a short distance you could feasible walk to the ground in 35 minutes, however for those in possession of a ticket, you may as well take advantage of the free public transport which is included in the price!

The stadium’s address is as follows:

Parking is severely limited at Stade de Suisse, and it’s recommended that you instead take some form of public transport.

The main railway station of Bern is located a few kilometres away from Stade de Suisse which means Bern Wankdorf station is the closest. Situated five minutes north of the stadium, it forms part of the S-Bahn lines with services running a few times an hour.

The closest and most affordable hotel to Stade de Suisse is the Hotel Ibis Bern Expo with the other options nearby such as the Novotel and Hotel Alpenblick all very expensive. You’re much better off hopping back on the tram, and finding something livelier within the centre of Berne.

Who plays at Stadion Wankdorf?

What is the capacity of Stadion Wankdorf?

As of 2023 Stadion Wankdorf has an official seating capacity of 32,000 for Football matches.

When was Stadion Wankdorf opened?

What is the postcode for Stadion Wankdorf?

The postcode for Stadion Wankdorf is CH-3022.

Covid Restrictions may be in place when you visit Stadion Wankdorf in 2023. Please visit the official website of Young Boys for full information on changes due to the Coronavirus.