Stadio di Cornaredo or Cornaredo Stadium is the home ground of Lugano F.C who compete within the tiers of Swiss Football. Multi-purpose by design the stadium is capable of seating 10,500 having first opened in 1951.

Cornaredo Stadium first opened in 1951 in anticipation of the 1954 World Cup which was hosted by Switzerland. Multi-purpose by design as was the trend across Europe at the time the original Cornaredo was built with a capacity of 15,000 which included 5,000 seats.

The stadium was one of six Swiss stadiums used for the World Cup and the only one to come from a predominantly Italian speaking region. With the second smallest capacity behind Charmilles Stadium in Geneva, Stadio di Cornaredo hosted just the single match of the tournament.

Whilst we know that Italy defeated Belgium 4-1 on 20th June in the third match of Group 4, historians are generally unsure as to the exact attendance figures. Some reported suggest that a crowd of 24,000 saw the match whereas others put the figure closer to 26,000.

In 2008 Stadio di Cornaredo underwent moderate renovation work in order to bring it upgrade the facilities in line with the requirements of the Swiss Football League. The work which was staggered over a three year period completed in 2011 and resulted in today’s current capacity of 10,500.

As for the future of the historic stadium it appears as if its days are numbered with the Municipality of Lugano approving preliminary plans for a Nuovo Cornaredo back in March 2015. The concept will see a purpose-built football ground built next to the old Cornaredo stadium on the adjacent pitch.

Below is a seating plan of FC Lugano's Stadio di Cornaredo: 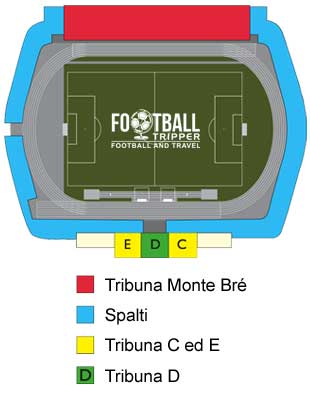 The uncovered south stand or Curva Ospiti is usually used to house the away fans. It is very much a no thrills place to watch the game from and views leave a lot to be desired as a result of the athletrics track around the perimeter of the pitch.

Whilst you can usually pick up the odd bit of official merchandise from vendors around the stadium on matchdays there isn’t a permanent club shop. Visit FC Lugano’s website to access their online fan store instead which will be launching soon.

It doesn’t look as if any guided tours are available of Stadio di Cornaredo. Expect this to change however if FC Lugano ever construct a new stadium.

How to buy FC Lugano Tickets

Tickets to see FC Lugano at Cornaredo Stadium can either be purchased online in advance of the match or in person from Ticketcorner Points around the city and before kick-off from the various ticket offices.

How to get to Stadio di Cornaredo

Where is Stadio di Cornaredo?

The three car parks at Cornaredo are reserved on matchdays for guests of the club which means they might as well not be there for the average football fan.

FC Lugano subsequently recommend parking at the dirt yard to the south, the Resega zone, the nearby schools and the local Co-Op.

Lugano railway station which overlooks the nearby lake is well connected to the rest of Switzerland as its sits on the southern end of the Gotthard railway line.

Lugano Airport is only 8 km away from the city centre and has a surprising number of international flights. Failing this you could always fly into Milano Malpensa Airport which is 89 km away and connected via rail.

The majority of accommodation options are to be found within touching distance of Lake Lugano which shouldn’t be particularly surprising. Some of the more affordable options include Hotel Ibis, Albergo Montarina and Hotel Federale.

Who plays at Stadio di Cornaredo?

What is the capacity of Stadio di Cornaredo?

As of 2022 Stadio di Cornaredo has an official seating capacity of 10,500 for Football matches.

When was Stadio di Cornaredo opened?

What is the postcode for Stadio di Cornaredo?

The postcode for Stadio di Cornaredo is 6900.

Covid Restrictions may be in place when you visit Stadio di Cornaredo in 2022. Please visit the official website of FC Lugano for full information on changes due to the Coronavirus.