Benteler Arena is a multi-purpose football ground which is home to North Rhine-Westphalia based team, SC Paderborn 07. The stadium has a capacity of 15,360 and first opened in 2008, costing the club a modest €25 million .

Originally known as the Paragon Arena, SC Paderborn’s new stadium was constructed to replace the club’s former ground which had first opened back in 1957. Named after famous German poet Hermann Löns , the stadium had become outdated. Consisting of four low-quality stands, there simply wasn’t anything within Hermann Löns Stadion worth keeping and thus large-scale renovations were ruled out.

The wheels for a new ground were set in motion as early as the 7th January 2001 when Paderborn FC hired architectural firms to begin designing concepts. Two years later the city’s sports committee began to explore suitable locations and drew up a short list of eight potential sites, and after a brief consultancy period with the club, construction on the Paragon Arena began on 12th July 2005.

Whilst the preliminary work was conducted more or less without a hitch, the actual construction project took longer than estimated. The residents complained about the disruption and the local council withdrew the projects building permit. This effectively halted the project for two years, with a minor financial dispute between contractor Bremer AG and the city of Paderborn also delaying proceedings by a few months.

Two and a half years later after the estimated date of completion, the stadium opened on the 16th July 2008 with an opening ceremony and friendly match held against famous Turkish side Galatasaray S.K. A week later the first domestic match was held against Borussia Dortmund with the yellow and black visitors managing to spoil the party with a narrow 2-1 victory, not that it overshadowed the momentous and celebratory occasion.

Below is a seating plan of SC Paderborn 07's Benteler Arena: 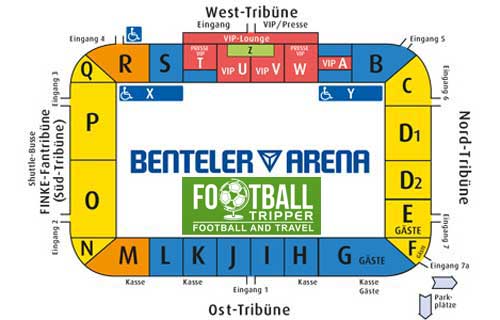 Away supporters who make the trip to the Benteler Arena are usually housed within the northern stand which is divided in two by a section of plastic fencing. This allows Paderborn to change the size of the allocation depending on how many away fans are expected to attend, as well as offer two ways in which fans can watch the game: terrace or seating.

There are a decent number of pubs within the city centre however as the Benteler Arena is located out of town the drinking culture is more based around getting to the ground early and sinking a few rather than pub-crawling.

Although the city of Paderborn has fast-food staples such as McDonald’s, Burger King and KFC dotted around the outer city limits, none are located en-route or near to the Benteler Arena. This means most fans make do with the food on sale at the stadium which isn’t bad in itself. Classics on sale include hot-dogs, pretzels and fries amongst other staples.

Paderborn operate a club shop at their stadium in addition to an SC Paderborn online store. Located within the western grandstand, there are also mobile merchandising units around the stadium on matchdays including in the east stand.

SC Paderborn currently offer fans the chance to undertake a 60 minute arena tour of the stadium. For more information and cost you can either phone the office on 05251/8787900 or send an email to [email protected]

How to buy SC Paderborn 07 Tickets

Below are the ticket prices for the 2015 season for adults, and the sections correspond with the seating plan shown above.

How to get to Benteler Arena

Where is Benteler Arena?

The Benteler-Arena is located out of town between the outskirts of Paderborn and the area of Elsen north-west of the historical city centre.

From the A33 take the Paderborn-Elsen exit and follow signs for Detmold/Bad Lippspringe and after 500 metres turn right towards the Benteler Arena.

There are numerous car-parks located within the immediate environs of the stadium with Car Park Map Benteler Arena giving the best overview of the parking situation. Unfortunately there’s no official price guide but expect to pay no more than a few euros for a parking spot.

The city’s main railway station is known as Paderborn Hauptbahnhof (Hbf) and is located approximately 3.5km south-east of the Benteler Arena.

The majority of hotel options are located back towards Paderborn’s city centre. Here there are decent and affordable options such as Hotel Ibib, Best Western and Welcome Hotel. Close to the station there is also a highly rated Hotel Kaup.

Who plays at Benteler Arena?

What is the capacity of Benteler Arena?

As of 2023 Benteler Arena has an official seating capacity of 15,300 for Football matches.

When was Benteler Arena opened?

Covid Restrictions may be in place when you visit Benteler Arena in 2023. Please visit the official website of SC Paderborn 07 for full information on changes due to the Coronavirus.