Stadio Dino Manuzzi is a football stadium located in Cesena which is located within the Emilia-Romagna region of Northern Italy. Home to A.C. Cesena, the 23,860 capacity stadium first opened in 1957 with the playing surface interestingly converted to artificial grass for the 2011/2012 season.

A.C Cesena’s stadium first opened in 1957 under the name of Stadio La Fiorita (Not La Favorita) which was taken from the district of Fiorenzuola within Cesena. Originally consisting of just two terraces, it wasn’t until the club gained promotion to Italy’s top flight in 1973 that the ground underwent significant expansion. At the time all Serie A stadiums were required to have a minimum capacity of 30,000.

The record attendance from this period was set a year later on the 10th February 1974 when 35,991 fans crammed into Stadio La Fiorita to see the home side take on and defeat Italian giants AC Milan in a surprising 1 nil victory. After Cesena’s former president Dino Manuzzi died the stadium was renamed in honour of him in 1982, recognising just over 16 years of service to the club.

Towards the end of the 1980s the stadium underwent large-scale renovations with three out of four stands being demolished and rebuilt from scratch. The East stand and the two traditional Curvas were reconstructed as a single structure which formed a U-shape around the perimeter of the pitch. With the addition of corner seating, the Stadio Dino Manuzzi is now one of the more modern stadiums from the 20th century.

In 2009 Cesena Calcio’s president Luca Mancini revealed his intentions to “complete the stadium” by rebuilding the isolated Western Grandstand for Euro 2016 but unfortunately Italy lost out on the hosting rights to France. The project was estimated to cost €27.5 million euros but without state funding the club aren’t likely to proceed, instead focusing on small improvements such as the conversion to an artificial playing surface in July 2011.

On 27th September 2014 it was announced that the club had partially sold the naming rights to the stadium to frozen food specialists Orogel, officially becoming Orogel Stadium – Dino Manuzzi. The first fixture was held a day later in a home league match against A.C Milan.

Below is a seating plan of Cesena's Stadio Dino Manuzzi: 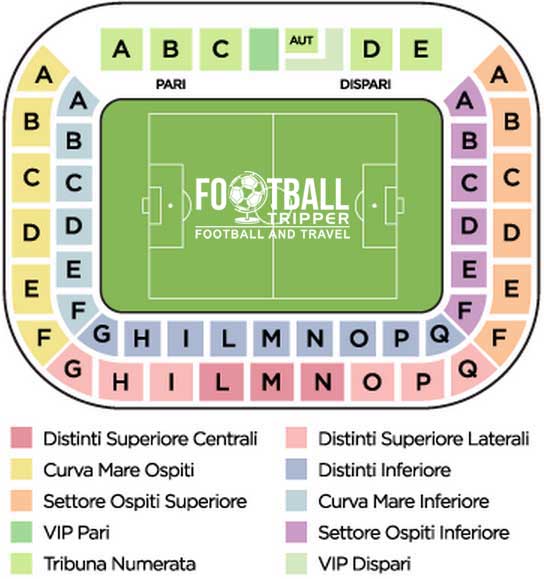 With a population just under 100,000 the city and commune of Cesena isn’t the most commercial town centre which means there aren’t an abundance of choices when it comes to places to drink or even nightlife for after the match. The map below outlines some of the more popular bars in the city.

Cesena is served by a number of locally run restaurants which means its really easy to not only get something for cheap, but also authentic to the Emilia-Romagna region. If you’re looking for a fast-food fix then there’s also a McDonalds located north just off of the A14 motorway.

The Seahorses operated a club shop at the stadium in addition to their recently redesigned online store. Although the club have their headquarters in the city’s main square just off of the Duomo, you can’t currently purchase tickets or merchandise from the office building. This means the best place and time to purchase Cesena goods is on matchday when you’re taking in the match.

A.C Cesena aren’t currently offering tours of the facilities at Stadio Manuzzi to the general public, however for fans with lots of money there does appear to be an option. Known as the Black & White experience, you can apparently meet players before the game and take a look around restricted areas such as the changing room.

There’s no word on the price of this VIP tour though!

How to buy Cesena Tickets

Tickets to see Cesena play at Dino Manuzzi can be purchased online, at the ticket-office at the stadium in the weeks leading up to the match or from any of the approved vendors (usually Tobacco shops) around the city centre.

How to get to Stadio Dino Manuzzi

Where is Stadio Dino Manuzzi?

The city of Cesena is located in the north of Italy within the Emilia-Romagna region which borders the more well known Tuscany area.

There appears to be a small amount of parking spaces at the stadium itself but it’s hard to deduce whether or not they are available to the general public. Less than five minutes north-west of the ground just across the SS9 dual-carriageway there appears to be two large car-parks which form part of the Centro Commerciale Montefiore.

The city is served by Cesena Railway Station which first opened in 1861. Located on the Bologna-Ancona Railway line, the station is located approximately 1.4km west of Stadio Dino Manuzzi and is walkable within 20 minutes either way.

The city of Cesena has a good number of hotels within its centre with Hotel Alexander, Hotel Florian and Hotel Casili all within a two minute walking distance of the railway station. Slightly further away on the eastern bank of the Savio river but also still walkable within 10 minutes are the budget Romagna and Savio Hotels.

Who plays at Stadio Dino Manuzzi?

What is the capacity of Stadio Dino Manuzzi?

As of 2023 Stadio Dino Manuzzi has an official seating capacity of 23,860 for Football matches.

When was Stadio Dino Manuzzi opened?

Covid Restrictions may be in place when you visit Stadio Dino Manuzzi in 2023. Please visit the official website of Cesena for full information on changes due to the Coronavirus.