Stadio Franco Ossola or Luigi Ganna Velodrome depending on which sport is being hosted, is a multi-purpose stadium located in the city of Varse, north-west Lombardy. Used for both football and cycling since first opening in 1925, the 8,213 capacity stadium is home to Serie B side A.S. Varese 1910.

Stadio Franco Ossola first opened in 1925 when it was known as Stadio del Littorio, a name which was also given to stadiums in Palermo and Chiavari during the fascist era including. Constructed whilst Varese were participating in Serie A, the stadium could initially accommodate over 23,000 spectators, however over the years the capacity has diminished due to relegations and updated safety requirements.

Referred to as Stadio Municipale after World War 2 to remove any political connotations, it was later changed in tribute to Franco Ossola in September 1950 after he perished in the Superga Air Disaster. Born locally, Franco Ossola began his career at Varese before transferring to Torino where he spent a decade in total. He was part of the formidable Grande Torino side which won five back to back titles and is widely regarded as one of the greatest teams of all time.

Although more commonly used for football, the stadium has also hosted high-profile cycling events such as the 1971 UCI Track Cycling World Championships. Equipped with a fully functional velodrome until just a few years ago, the stadium is commonly referred to as Luigi Ganna Velodrome when used for cycling events, after the man who won the first Giro d’Italia in 1901.

The most recent renovations at Stadio Franco Ossola occurred after Varese were promoted to Serie B along with Novara, and Portogruaro during the 2009/2010 season. New seating was installed which increased the capacity to 8,213, and after two back to back play-off pushes in the following seasons, the capacity was once again expanded to 9,424.

In the Summer of 2011 minor refurbishments of the changing rooms and other areas occurred, however it appears that A.S Varese may be moving out in the foreseeable future. Plans for a modern 10,000 capacity purpose built football ground have been circulated for years now, however based on the progress of other Italian teams, fans certainly aren’t optimistic. 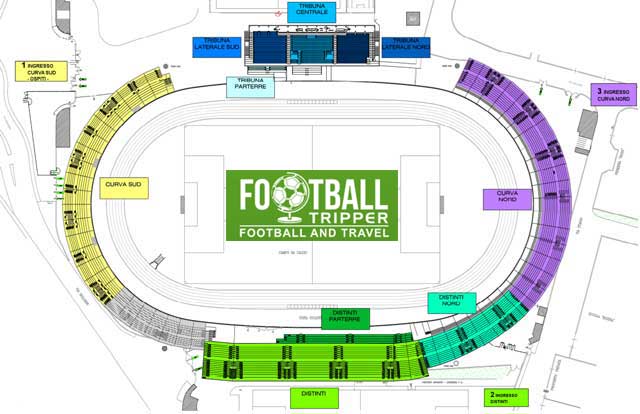 Below is a seating plan of Varese's Stadio Franco Ossola:

How to get to Stadio Franco Ossola

Where is Stadio Franco Ossola?

Who plays at Stadio Franco Ossola?

What is the capacity of Stadio Franco Ossola?

As of 2023 Stadio Franco Ossola has an official seating capacity of 8,213 for Football matches.

When was Stadio Franco Ossola opened?

What is the postcode for Stadio Franco Ossola?

The postcode for Stadio Franco Ossola is 21100.

Covid Restrictions may be in place when you visit Stadio Franco Ossola in 2023. Please visit the official website of Varese for full information on changes due to the Coronavirus.