Stadio Armando Picchi is a multi-use stadium in Livorno, Italy, mostly used for football matches by Serie B side A.S Livorno. It is named after Armando Picchi the legendary Inter footballer who started his career at the club and has a current capacity just under 20,000 seats.

Stadio Armando Picchi is a municipally owned stadium which first opened in 1935 after three years of planning. The fact that A.S Livorno Calcio needed a stadium fortuitously coincided with the period of Italian Fascism which sought to stoke a sense of Nationalist pride through sporting competition. As a result, the creation of a ground was relatively straightforward, and numerous Olympic Stadiums sprang up around the country including in Rome, Bologna and Torino.

Designed by Raffaello Brizzi, upon opening the stadium was named after Il Dulce’s daughter, Edda Ciano Mussolini, although the name fell out of use immediately after World War 2. Generally referred to as Stadio Communale Livorno, or Yankee Stadium, it wasn’t until the 1990s that it would receive a proper name.

Renamed in honour of Armando Picchi who died in 1971, the former defender was closely associated with the 1960s Grande Inter side, however first and foremost he was born in Livorno and made over 100 appearances for his boy-hood club.

Livorno’s stadium underwent a slight renovation when it was chosen to host football matches of the 1960 Summer Olympics in Rome, however it was overlooked as one of the venues of Italia 90 – The FIFA World Cup. As a result Stadio Armando Picchi remains very much an old-school football ground with an extensive use of reinforced concrete which has fallen out of fashion.

Although the legacy of the running-track still remains, it is no longer in use and has been partially built on with the extension of the gradinata, and the two curvas. There are currently no plans to relocate A.S Livorno to a new stadium so it appears that renovation of Armando Picchi is much more likely in the future.

Below is a seating plan of Livorno's Stadio Armando Picchi: 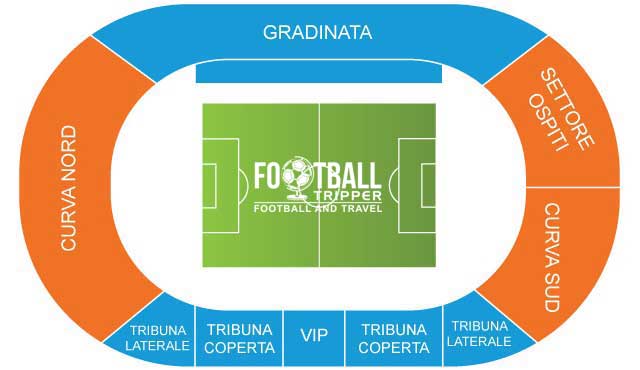 According to Livorno’s Google Plus Page the stadium is open Monday to Friday 9.30am – 12.30pm and then from 3.00-6.00pm in the evenings. There is a strong chance that this could be referring to a shop, but it also could just be in reference to a ticket office. For now until there is more information it’s probably best for you to save your Livorno gift buying for matchdays.

Livorno do not currently offer tours of the Stadio Armando Picchi and this is unlikely to change in the foreseeable future, not until they commercialise the facilities in the way Juventus have and Roma are planning to do. As a staunchly left wing club such proposals might be slightly controversial, so don’t hold your breath…

How to get to Stadio Armando Picchi

Where is Stadio Armando Picchi?

Stadio Armando Picchi is easily accessible via car with the Livorno website offering the following instructions from the A12 (North of the city):

For parking fans are directed to “La Rosa” neighbourhood with a dedicated carpark located on Via dei Penieri which is the road surrounding the eastern stand of the stadium, although there are limited spaces. Alternative there may be some “offroad” parking near the north stand but check local regulations and whether or not everyone is doing :)

Note: Whilst I have done my best to translate these directions, do not trust them 100% – Use Satnav if driving!

Livorno is served by Pisa International Airport which is 25km north of the city and the main airport of Tuscany. From Pisa Central Station, Stazione Ferroviaria Pisa Centrale, you can travel on the Pisa-Livorno-Rome line which will take you no more than 20 minutes to get to Livorno Centrale Railway Station. Train numbers 2 and 4 are the most frequent services to Livorno, but occasionally numbers 9 and 10 will also take you.

The undeniably closet hotel to the Armando Picchi stadium is Hotel Atleti which is cheap and cheerful, with the second closet being the 20th century Art Nouveau designed Hotel Gennarino which is near the Italian Naval Academy. With the city centre only 1.9 miles away there’s also plenty of options there with the Hotel Ariston and Hotel Touring receiving decent reviews. Lastly, if you’d rather be near the station then unsurprisingly Hotel Stazione is your companion.

Who plays at Stadio Armando Picchi?

What is the capacity of Stadio Armando Picchi?

As of 2023 Stadio Armando Picchi has an official seating capacity of 19,238 for Football matches.

When was Stadio Armando Picchi opened?

What is the postcode for Stadio Armando Picchi?

The postcode for Stadio Armando Picchi is 57128.

Covid Restrictions may be in place when you visit Stadio Armando Picchi in 2023. Please visit the official website of Livorno for full information on changes due to the Coronavirus.