Stadio Sandro Cabassi is a multi-purpose football stadium located in the north-central town of Carpi. Built in 1928, and renovated as recently as 2012, the 4,144 capacity ground is home to local team Carpi FC 1909.

Carpi’s Stadio Sandro Cabassi is a communal stadium which first opened in 1928, and has been home to the local football team ever since. Initially named after Mario Papotti who was a young boy who died during the Spanish Civil War, the stadium was renamed after Sandro Cabassi, towards the end of the Second World War in 1944.

Like other municipally owned grounds in Italy such as Stadio Bergamo and Stadio Bentegodi, it suffers somewhat from being designed as a multi-purpose stadium. Although it doesn’t have an athletics track around the perimeter of the pitch, it does still have the concrete remnants of a velodrome which is still somewhat problematic.

Renovations have generally been the result of more stringent stadium safety criteria as Carpi have progressed through the tiers of Italian Football. For example when the club played in Serie C in the 2011/2012 season renovation work on the two long sides was completed worth over 1.2 million euros.

On 12th April 2011 Stadio Sandro Cabassi hosted its first international match between Italy and England. The under 18s match between the two famous footballing nations counted legendary AC Milan manager Arrigo Sacchi amongst those who attended.

For the 2016 season Carpi F.C are set to play in Serie A, the top flight of Italian Football, for the first time in the club’s history. With a capacity just above 4,000 I Biancorossi may well be forced to ground share a larger stadium or expand the facilities over the Summer to meet the league’s criteria.

Below is a seating plan of Carpi's Stadio Sandro Cabassi: 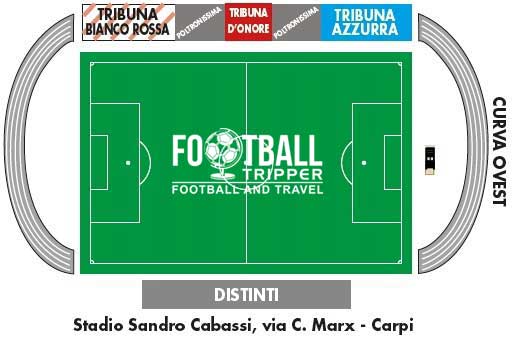 The away fans (Settore Ospiti) are usually housed within Curva Est which is the eastern goal-end.

Carpi is a reasonably small commune with a population of less than 100,000, and thus naturally there isn’t the same range of choice as other larger towns in the area.

The city has plenty of independently run cafes and restaurants which sell authentic local and Italian Cuisine.

According to the Carpi Calcio Store which is online, the club operate a ship on 47 Via Statale Street, 5/18, 42013 Casalgrande Reggio Emilia.

There’s no way Carpi FC offer fans the chance to undertake a guided tour of the stadium as there simply isn’t anything much to see! The best alternative would be to get there early and walk around the stands.

How to buy Carpi Tickets

Tickets to see Carpi FC 1909 in action can either be purchased online from the official website or in person at the ticket office located at the stadium.

How to get to Stadio Sandro Cabassi

Where is Stadio Sandro Cabassi?

Carpi is a small Italian town and commune with a population of around 67,000. Situated between Parma and Bologna in the Emilia-Romagna region, the Stadio Sandro Cabassi is in northern Italy.

From Verona Autostrada Modena-Brenner (A22) exit at Carpi and follow signs to the city centre. At the second roundabout take the first exit and look for signs for the stadium.

From Autostrada del Sole (A1) take the northern exit near to the A22 and then follow the instructions in the previous paragraph.

Who plays at Stadio Sandro Cabassi?

What is the capacity of Stadio Sandro Cabassi?

As of 2023 Stadio Sandro Cabassi has an official seating capacity of 4,144 for Football matches.

When was Stadio Sandro Cabassi opened?

What is the postcode for Stadio Sandro Cabassi?

The postcode for Stadio Sandro Cabassi is 41012.

Covid Restrictions may be in place when you visit Stadio Sandro Cabassi in 2023. Please visit the official website of Carpi for full information on changes due to the Coronavirus.