Stadio Partenio-Adriano Lombardi is a 26,000 capacity multi-purpose stadium located in the city of Avellino which is in the southern region of Campania. Predominantly used for football matches, the ground first opened in 1973 and is home to local side A.S. Avellino 1912.

Stadio Partenio first opened in 1971 following a construction period of around one year. Designed by Italian football architect Costantino Rozzi who also lent a hand to Stadio Via del Mare, Stadio Ciro Vigorito, Stadio Romagnoli, the municipally owned stadium originally featured an athletics track around the perimeter of the pitch.

On 9th June 2011 it was announced that the stadium’s name would be partially altered in tribute of Aldriano Lombardi who is regarded as one of Avellion’s iconic players during the Serie A era and later on, manager. After his death the number 10 jersey was immediately retired as a mark of respect, and a few years later it was voted that the stadium would also be fully renamed in his honour.

As a stadium which first opened in the 1970s it was relatively modern compared to a lot of football grounds in Italy which dated back to the pre-Second World War Period. Subsequently Stadio Partenio hasn’t got the same laundry list of renovations of similar stadiums, with the restructuring which occurred at the end of the 2012/2013 season being the most significant development since the stadium first opened.

Beginning on June 24th 2013, the stadium was restyled by Vincenzo Maria Genovese, and both the stadium’s interior and exterior was given a fresh coat of paint. The athletics track was completely removed, and covered over with blue and Italian flags, and the stadium was fitted with modern plastic seating in a green and white arrangement which better reflects the teams colours.

The highest profile match hosted at Stadio Partenio to date was arguably the second leg of the 1989/1990 UEFA Cup final between Fiorentina and Juventus. Whilst the first leg was held at Stadio Olimpico di Torino, the second leg would have been held at Stadio Artemio Franchi had it not being for the 1990 World Cup which was due to start on the 8th June in a few weeks time.

Below is a seating plan of Avellino's Stadio Partenio-Adriano Lombardi: 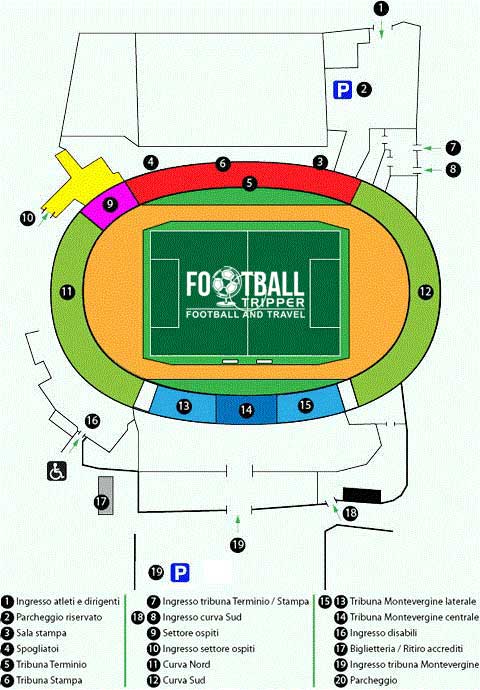