Stadio Polisportivo Provinciale is a multi-purpose sports stadium located in the Province of Trapani of Western Sicily. Home to Trapani Calcio who are known as Granata (the Garnets), the ground first opened in 1960 and has a current capacity of 7,000 with the last major renovation occurring in 1987.

The inaugural football match at Stadio Polisportivo Provinciale was held on the 7th day of the 1960/1961 season against Taranto, with the home side christening their new stadium with an entertaining 3-2 win. Costing an estimated 270 million lira, the stadium was designed by engineer Cesare Macaluso and took approximately three years to build after construction began on April 1957.

In reality the projected dated back to 1951 when the local Trapani council began scouting sites for a potential new sports venue, and the project hasn’t been blessed with the best of luck. Almost 50 years after first opening, the stadium still hasn’t been completed as per the original design. If it followed the original blueprints then the stadium is estimated to have a capacity of either 11 or 12,000.

The Curva Sud is yet to be built to the same specifications as the opposite Curva Nord, and the grandstand only runs for three quarters the length of the pitch. As a result the capacity of the stadium only sits at 7,740. In November 2011 new state of the art light towers were installed, and at the start of the 2015 season synthetic turf was installed on the playing surface to be more hard wearing.

For two consecutive seasons between 1988-1990 Palermo ground-shared the stadium with Trapani after their Stadio La Favorita underwent large-scale renovations for the 1990 World Cup. Although the ground has yet to host matches of Senior Internationals, it has twice hosted games of the Under 21s, and football matches of the women’s team in the 1980s.

Below is a seating plan of Trapani's Stadio Polisportivo Provinciale: 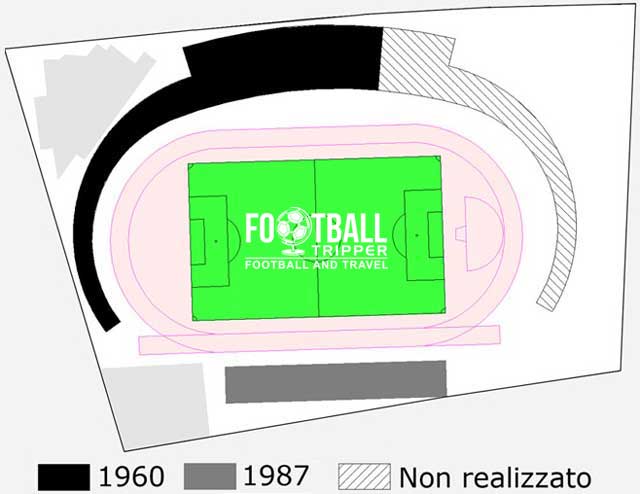