Stadio Domenico Francioni is the home stadium of U.S. Latina Calcio who routinely compete in Italy’s second highest division, Serie B. First opened back in 1935 the ground is primarily used for football matches, and in 2009 Francioni underwent renovations to bring it up to its current capacity of 6,850.

Stadio Domenico Francioni first opened in time for the 1935/1936 season after a construction period of around three years. Designed by Oriolo Frezzotti who was an urban planner who rose to prominence during the era of fascism, the stadium was one of many constructed by Mussolini in order to stoke a sense of national pride through sporting competition.

Funded by the tax-payer and municipally owned, the stadium was naturally designed to be multi-purpose, and thus an athletics track resided around the perimeter of the pitch. Whilst there’s some suggestions that the ground was called Stadio Littoria similar to stadiums in Palermo, and Varse, it was more commonly referred to as just Stadio Comunale in the post-war period.

In December 1996 it was renamed to Stadio Domenico Francioni in honour of U.S Latina Calcio’s longest serving president since the club’s formation in 1945. Remaining the city’s largest stadium throughout both the 20th and 21st century, Domenico Francioni has hosted a handful of high-profile sporting events besides the matches of Latina Calcio.

U.S Latina Calcio made their Serie B début in the 2013/2014 season after defeating ASG Nocerina and Pisa in the play-offs, and to date this is the highest level of football hosted at Stadio Domenico Francioni. The club also won their first ever Italian Pro League Cup after defeating Viareggio in the previous season.

In the late 1990s, the stadium also hosted an International friendly match between Italian and Hungarian under 18s, and in 2003 hosted a charity match between air-force pilots and journalists from Rai Sport.

Below is a seating plan of Latina's Stadio Domenico Francioni: 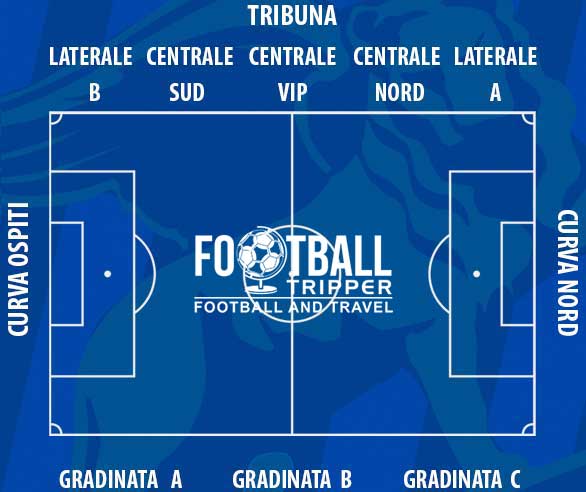