Stadio Alberto Braglia is a multi-purpose sports arena located in the North central Italian city of Modena. Built in 1936 with a capacity of 21,151, the ground has long primarily been used for the Football matches of local team Modena F.C, and in recent seasons between 2008-2013 the home of U.S. Sassuolo Calcio.

Stadio Alberto Braglia has been the home ground of Modena F.C since the club formed as the result of a merger back in 1912. One of the first friendly matches played by the club occurred on 1st November against Ardita Ausonia F.C who were also from the Reggio Emilia region. The stadium’s facilities were very basic and it wouldn’t be until the 1930s that the pitch would develop into a proper stadium.

Work began in the Summer of 1936 when the pitch was switched from north-south rather than east-east as per league regulations, and a concrete grandstand was erected. Informally referred to as both Piazzi d’Armi and Viale Fontanelli after investment from the local municipality of Modena, the stadium was now known as Stadio Comunale.

Construction work finished two years later in 1938 and now consisted of four stands, an athletics track and a pitch. In February 1957 it was officially named Stadio Alberto Braglia in tribute to the Modena born gymnast who won 3 Olympic Medals. Previously it had been named Stadio Cesare Marzari after a former player who died in the Spanish Civil War but the political connotations were removed after World War 2.

The stadium remained relatively untouched until the turn of the millennium when it underwent large scale renovation work between 2002 and 2007. Coinciding with Modena’s two back to back promotions from Serie C1 to Serie A, all four stands were rebuilt over a four year period to create a fully enclosed rectangular football stadium.

Resulting in a capacity of 21,151 stadium without a running track, Modena had upgraded Alberto Braglia to one of the most modern facilities in Italy. As a result Modena F.C ground-shared the stadium with Sassuolo Calcio between 2008-2013 before they later moved into Stadio Città del Tricolore and in August 2010 Juventus used it to play a Europa League qualifier against Shamrock Rovers.

Below is a seating plan of Modena's Stadio Alberto Braglia: 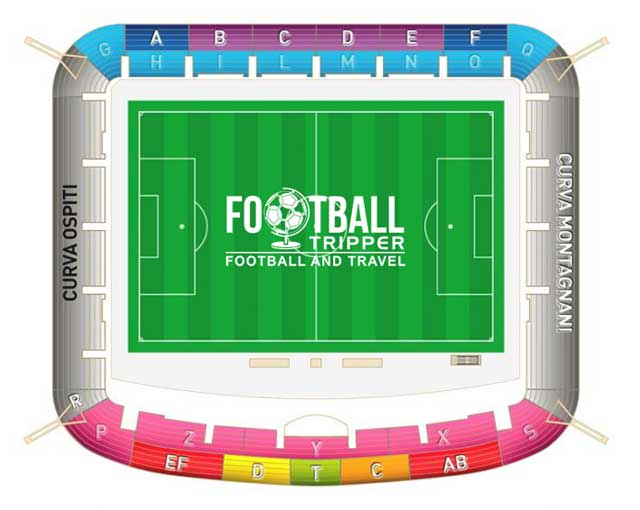 How to get to Stadio Alberto Braglia

Where is Stadio Alberto Braglia?

Who plays at Stadio Alberto Braglia?

What is the capacity of Stadio Alberto Braglia?

As of 2022 Stadio Alberto Braglia has an official seating capacity of 21,151 for Football matches.

When was Stadio Alberto Braglia opened?

Covid Restrictions may be in place when you visit Stadio Alberto Braglia in 2022. Please visit the official website of Modena for full information on changes due to the Coronavirus.