Stadio Renzo Barbera still commonly known by the previous name of Stadio La Favorita, is a large 36,349 capacity stadium located on the Island of Sicily. Home to U.S. Città di Palermo who famously play their football in pink and black kits (Rosaneri), the ground hosted matches of the 1990 FIFA World Cup.

Palermo’s stadium first opened on the 24th January 1932 under the name of Stadio Littorio in homage to Mussolini’s Leadership. The Fascist regime constructed several stadiums during the pre-war period such as Bologna’s similarly named Stadio Littoriale and even Turin’s Olympic Stadium. The original structure consisted of just a pitch surrounded by an Athletics track and only two stands spanning the sides of the pitch.

The inaugural match was held against Atalanta with the home side christening the new stadium with a convincing 5-1 win, helping to spark interest in football throughout the island of Sicily.

In 1948 Renzo Barbera was one of the first municipally owned stadiums in Italy to do away with the troublesome Athletics Track, and the first major redevelopment took place in 1984 which added another tier and increased the capacity to 50,000.

The city of Palermo was chosen as one of the host venues of the 1990 World Cup and Renzo Barbera underwent it’s third and most recent redevelopment, resulting in the stadium’s current configuration and 37,619 all seater capacity. Palermo’s ground hosted three matches of group F featuring every team except England: Egypt, Netherlands and Republic of Ireland.

The stadium has undergone a handful of name changes throughout its existence with the stadium renamed Stadio Michele Marrone after a solider killed in the Spanish Civil war between 1936 – 1945 and Stadio La Favorita between 1945 – 2002. The name Stadio Renzo Barbera was only introduced in September 2002 in honour of Palmero’s late president.

Below is a seating plan of Palermo's Stadio Renzo Barbera: 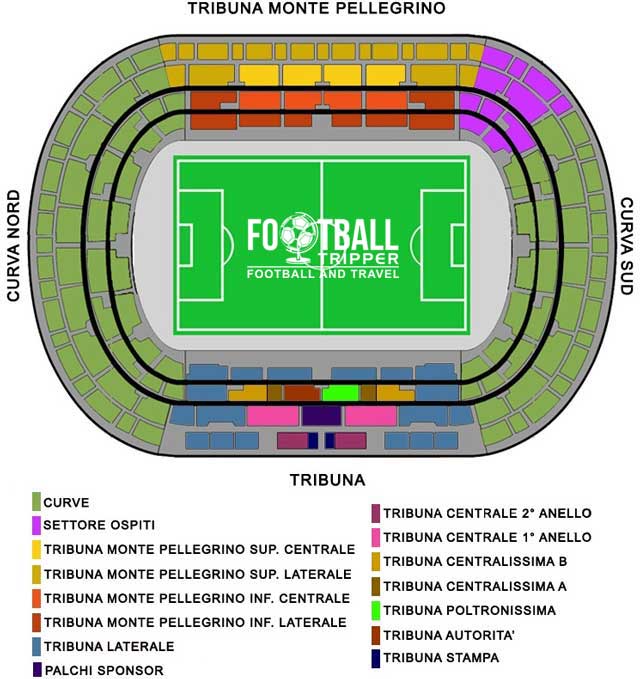 Away fans who island hop to Palermo and make the intimidating journey to Stadio La Favorita are housed within a section of seating located in the south-east corner sandwiched between the Tribuna Monte Pellegrino and the Curva Sud.

The standard allocation consists of around 2,200 seats for away fans with 925 tickets distributed amongst the lower tier and around 1,308 for the upper “Superior” section.

Like every other section of Stadio Renzo Barbera, the views throughout the away section, “Settore Ospiti”, are perfectly fine if slightly restricted. The cage as it is dubbed is comparable to away sections in other Italian grounds, with the passionate Palermo fans really making the trip memorable for most visiting supporters.

The majority of pubs are within a mile or two inland of the historic harbour, however you will encounter some smaller cafes and bars as you make your way to the ground. It can be sweltering in the Summer so I wouldn’t worry too much about not being able to find a cold drink.

Likewise when it comes to food if you want to enjoy the authentic Sicilian Cuisine then you’re best off sticking to the central business district so to speak. Food options in and around the ground remain limited to matchday staples such as chips.

Palermo operate two club stores around the city in addition to their own official online store. The first store is located at  Via Paternostro, 10, Piazza Castelnuovo in the city centre, and is open Monday to Saturday between 9.30 am to 1.00 pm and 16.00 pm to 8.00 pm. This is essentially a minute walk from Palermo Central Station.

The second store is located within Conca d’oro Shopping Centre which is just under 5.5km north-west of Stadio Renzo Barbera or around 10km from the city centre. Unless you have a hire car this one isn’t the most practical to access, although there is a vast range of other shops there and decent opening times seven days a week between 9.00 am and 9.00.

As they are municipally owned facilities, it doesn’t appear as if Palermo offers fans the chance to tour Stadio Renzo Barbera, but if this changes we’ll be sure to update this section.

How to buy Palermo Tickets

Tickets to see Palermo can be purchased online or at the stadium’s ticket office with prices changing depending on which team is visiting La Favorita. Divided into three pricing categories  the most expensive tickets (Fascia A) are for the larger clubs such as the Milan Teams and Juventus, with (Fascia C) reserved for the newly promoted clubs.


The above prices are based on Fascia B, the middle category and may increase or decrease depending on how large the team is.

How to get to Stadio Renzo Barbera

Where is Stadio Renzo Barbera?

The stadium is located just over 5.km north of Palermo City centre, approximately 2km inland from the coast in what I would describe as not the most accessible of locations for tourists.

There appears to be parking around the stadium as it is located within a wider sports complex however we can’t currently confirm prices. As a back up drive towards Piazza Giovanni Paolo II where there appears to be a few decent sized car parks.

Palermo Central Railway Station is located in the central business district approximately 5.4 km south of Stadio Renzo Barbera. Unfortunately there are now satellite stations which means if you choose to walk by foot it will likely take you the best part of an hour.

The nearby urban area known as Zona Favorita is home to quite a few reasonably priced hotels such as the Hotel Casena dei Colli, and the Torreata Residence Hotel however you will find much more options back towards the city centre.

If you’re on a budget then the two star Hotel Italia located less than five minutes from the station could be worth a look.

Who plays at Stadio Renzo Barbera?

What is the capacity of Stadio Renzo Barbera?

As of 2023 Stadio Renzo Barbera has an official seating capacity of 36,349 for Football matches.

When was Stadio Renzo Barbera opened?

What is the postcode for Stadio Renzo Barbera?

The postcode for Stadio Renzo Barbera is 90146.

Covid Restrictions may be in place when you visit Stadio Renzo Barbera in 2023. Please visit the official website of Palermo for full information on changes due to the Coronavirus.