Stadio San Nicola or San Nicola da Bari is a large multi-purpose stadium located in the second largest economic city in Southern Italy, Bari. Used mostly for football matches of local team F.C. Bari 1908, it was built for the 1990 World Cup where it hosted five matches including the third place play-off between Italy and England.

Stadio San Nicola was one of two venues along with Stadio Delle Alpi purpose built for the 1990 World Cup. Despite the reason for construction, the stadium was configured as a multi-purpose sports venue which has proven unpopular with football fans. Whilst the stadium did hosted the 1997 Mediterranean Games and can be considered a success, San Nicola is the fourth largest stadium in Italy, and thus arguably too large for F.C Bari.

Selected as one of twelve venues for the World Cup, Stadio San Nicola hosted a total of five matches throughout the tournament including three group matches and two during the knock-out stages. The group games were all of Group B: Soviet Union v Romania (0-2), Cameroon v Romania (2-1), and Cameroon v Soviet Union (0-4).

The first knock-out game was a Round of 16 which saw Czechoslovakia defeat Costa Rica 4-1 in empathetic fashion, and the second was a third place play-off. The hosts Italy defeated England 2-1 to finish the tournament on a high after being knocked-out by Napoli’s Maradona.

A year after the tournament ended Stadio San Nicola hosted the 1991 European Cup Final between Red Star Belgrade and Marseille, and 51,587 fans saw the Serbian side lift their first ever European Trophy. It has since hosted occasionally high-profile matches such as World Cup and Euro qualifiers against the likes of Scotland in 2008, and Ireland in 2010.

The stadium continues to host domestic matches of resident side Bari F.C, who usually average crowds of just under 20,000 per season. Stadio San Nicola occasionally sells out and attracts high attendances for important matches such as the 2013/2014 Serie B play-off final against Latina Calcio. Previously the attendance record was set at 52,000 during the 2009/2010 season when they were managed by Antonio Conte.

Below is a seating plan of Bari's Stadio San Nicola: 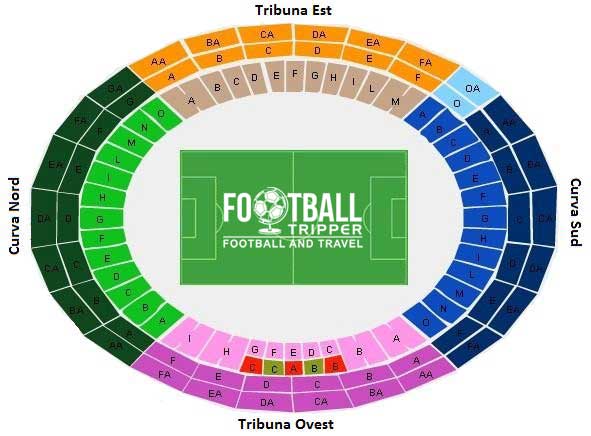 How to get to Stadio San Nicola

Where is Stadio San Nicola?

Who plays at Stadio San Nicola?

What is the capacity of Stadio San Nicola?

As of 2023 Stadio San Nicola has an official seating capacity of 58,270 for Football matches.

When was Stadio San Nicola opened?

What is the postcode for Stadio San Nicola?

The postcode for Stadio San Nicola is 70131.

Covid Restrictions may be in place when you visit Stadio San Nicola in 2023. Please visit the official website of Bari for full information on changes due to the Coronavirus.