Stadio Communale Luigi Ferraris often referred to by the neighbourhood where it is located “Marassi” is a football stadium in Genoa used by C.F.C Genoa and U.C. Sampdoria. Opening in 1911 with a seating capacity of 36,703 the stadium is one of the older grounds still in use for Football and Rugby in Italy.

Genova’s Communale stadium first opened on the 22nd of January 1911 with a friendly match between Internazionale and Genoa who at the time who were the only football club in the city. Founded in the 19th century as a Cricket and Athletics club to represent Britain abroad, the sports club eventually developed a Football Team in 1897 and became one of the first Association Football Teams in the Peninsula.

Eventually adopting the colours of the Union Jack – Red and Blue, I Rossoblu, Italians were not permitted to join until the creation of the Italian Football Federation and the Football League in 1898. With Genoa’s origins it would perhaps be fitting that their Stadium would be regarded amongst the most English in the country.

However it wasn’t until it was completely demolished and rebuilt from the ground up for the 1990 World Cup that Stadio Marassi became what we would describe today as a purpose built football stadium. Upon opening it had a capacity of just 20,000 and although it was expanded slightly to host a quarter final of the 1934 World Cup it remained spartan in appearance until the 1990s particularly due to its lack of roof.

One of the most successful stadiums of the tournament, Stadio Luigi Ferraris directly inspired Preston North End’s plans to redevelop their Deepdale Stadium. Starting in 1995 and finishing in 2008, each stand was individually demolished and rebuilt with the most notable element  borrowed from The Marassi being the iconic tower roof supports on each corner of the pitch.

To this day it continues to host International fixtures with an infamous Euro 2012 qualification match between Italy and Serbia abandoned in October 2010 after the visiting supporters threw flares and fireworks onto the pitch. Stopped after just six minutes of play due to crowd trouble, succesful International matches have since been held at Luigi Ferraris.

Below is a seating plan of Genoa & Sampdoria's Stadio Luigi Ferraris: 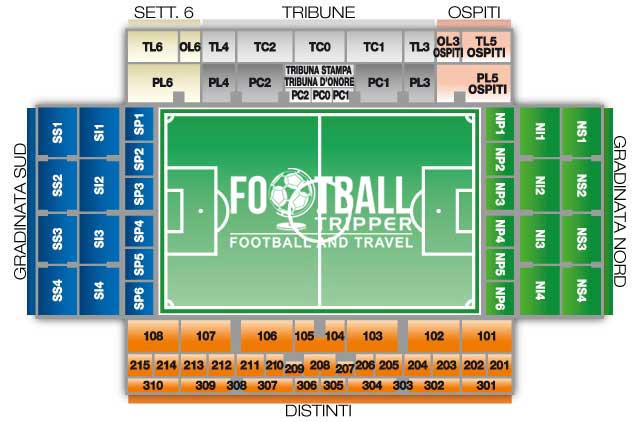 Regardless of which team is at home, away fans are always housed within the main grandstand, Tribuna D’Onore. The only thing which changes depending on whether it’s Genoa or Sampdoria is which end the fans are located, with the seating arrangement usually designed to keep the Ultras and travelling fans separated as far as possible which creates a better atmosphere.

Away fans who see their team take on Sampdoria occupy the northernmost section of the west stand, and when Genoa play at home the away fans are shifted to the southern section. Consisting of two-tiers of seating which are fully covered, the views from the away sections are excellent and generally on par with stadiums in England.

If your seat is right at the front of the lower tier your views may be partially restricted due to the fencing between the stand the perimeter of the pitch, however this only applies to a very small percentage of tickets. As the away section doesn’t often sell out, you can always move further back to get a better view – this is what a lot of the fans inside the stadium do themselves.

There are a good number of places to drink around the harbour towards the eastern half of the city with the map below displaying some of the most highly rated Sports Bars and Irish Pubs.

There are small snack vendors littered around the stadium but if you’re planning on getting dinner, it is probably best done before, or after in the typically late by our standards, Italian way.

The Marassi neighbourhood and Brignole train station does have a few bars and ristoranti but you’re probably better off heading back to the city centre for more expansive options.

Merchandise of each club can be purchased from various places around the stadium on matchdays with Sampdoria operating a shop at Stadio Ferraris within the back of the Gradinata Sud in addition to two other shops around the city (Via Caesarea and Via Giuseppe Biancheri).

As for Genoa, the club’s main store is located on Via Al Porto Antic (The Old Port) in a shared building with the club’s museum. Located next to the famous Aquarium, the historic harbour is easy to reach and is a very popular location for tourists in the city.

Neither Genoa or Sampdoria offer tours of the Marassi so your best bet is to just go and take in a game there.

As stated above, there is the Genoa Museum which serves as a history of Italian Football which looks like a decent, if not better tourist proposition than walking around an empty, and old stadium.

How to buy Genoa & Sampdoria Tickets

Tickets to see both Genoa and Sampdoria or any Football match at The Marassi stadium can be purchased online. Below represents a reasonably price range for each section of the ground:

Category A is based on a match against Juventus, Category C against Hellas Verona.

Based on a match against Cesena so prices are likely to increase for bigger teams.

You can purchase tickets for either team from various shops around the city and at the ticket office at the ground in the days leading up to the match – assuming the match hasn’t sold out.

How to get to Stadio Luigi Ferraris

Where is Stadio Luigi Ferraris?

When it comes to Parking your vehicle you are advised not to park in the Marassi neighbourhood as there is residential parking only (ZSL), and you need a permit if you want to stay beyond a few hours.

Instead both club websites recommend that you park at or around Brignole Metro station for the most convenience.

Instead it is advised that you take a train east from Genova Principe to Genova Brignole railway station which then leaves you with a more manageable 20 minute walk. Unlike the metro below it is one stop and much quicker, however there are less trains per hour so its a bit of a trade off.

The closest stop is Brignole Metro station which is located at the same place as the aforementioned railway station. Depending on your starting location it might make more sense to catch the metro but realistically you can catch either.

Genoa is served by Aeroporto di Genova which is 4.6 miles west of the city centre. Also referred to as Cristoforo Colombo Airport after the world famous explorer and local resident,  you can travel into the city either by the Volabus or by train taking no longer than 20 minutes.

There are plenty of hotels which overlook the historic harbour of Genoa giving you lots of choice depending on your budget and taste.

Our three choices would be Holiday Inn (West) , Hotel Helvetia (East) and Hotel Vittoria (Central), but by all means don’t take these as Gospel and take a look for yourself.

Who plays at Stadio Luigi Ferraris?

What is the capacity of Stadio Luigi Ferraris?

As of 2023 Stadio Luigi Ferraris has an official seating capacity of 36,600 for Football matches.

When was Stadio Luigi Ferraris opened?

What is the postcode for Stadio Luigi Ferraris?

The postcode for Stadio Luigi Ferraris is 16139.

Covid Restrictions may be in place when you visit Stadio Luigi Ferraris in 2023. Please visit the official website of Genoa & Sampdoria for full information on changes due to the Coronavirus.