Tallaght Stadium is the home stadium of League of Ireland football team, Shamrock Rovers F.C. Operated by South Dublin County Council, the ground opened in 2009 at a cost of €11.2 million and is now one of the most modern venues in the country with a capacity of 6,000.

The construction of Tallaght Stadium was certainly a protracted affair with the original planning permission for the site granted back in January 1998. Taking slightly over a decade to complete, the project was fraught with legal disputes after South Dublin County Council took back the land they had given to Shamrock Rovers in 2005 after they believed that the conditions of their agreement had been breached.

One of the largest bones of contention was the size of the playing surface at Tallaght Stadium which would have been too small to incorporate Gaelic Football Matches, although the original specification of the stadium always intended this to be the case. After legal challenges and much debate about the “cultural diet” of local youth sports, a Judicial review concluded on 14th December 2007, unanimously backing Shamrock Rovers F.C stadium project.

The first match at the much anticipated new stadium was held against Sligo Rovers on 13th March 2009, attracting a sell-out crowd of 3,000. Officially opened on 27th June with a proper ceremony, the club turned their pre-season preparations into a “festival of football” and invited Newcastle United, Hibernian F.C, and Spanish giants Real Madrid to all play friendly matches.

To date the highest level of Football at the stadium has arguably either been matches of the under 21s national team or a Champions League qualifier against F.C Copenhagen during the 2011-2012 season, with Juventus being the most famous club to play competitively. Rovers qualified for the group stages of the Europa League in 2011 and were drawn against Tottenham, P.A.O.K, FC Rubin Kazan, and FK Partizan.

Below is a seating plan of Shamrock Rovers's Tallaght Stadium: 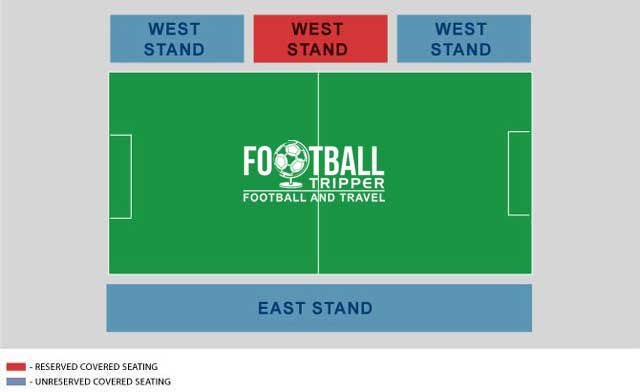 The travelling contingent is usually located within the West Stand which runs for the length of the pitch, however which blocks are designated to away fans can sometimes change with suggestions being that it can be anywhere between G and J depending on demand.

North of the ground there the Square Tallaght shopping center, and although it doesn’t contain any traditional boozers, you can still grab a pint from some of the restaurants within such as The Blazin’ Grill Steakhouse, Mao at home and Eddie Rocket’s city dinner.

Slightly further away, 10 minutes north along Belgard Road towards Clondalkin there is The Belgard Pub Complex. This one may however be more suitable to home supporters, although it might be worth trying anyway if you’re in a small group with no obvious colours.

The aforementioned Square shopping centre has the likes of McDonalds, KFC and Burger King, with Tescos also available for anyone who fancies something potentially more healthy.

The club operate a Shamrock Rovers Megastore within the stadium complex on Whitestown Way in addition to their official online store , and combined there are hundreds of different merchandise and souvenirs fans can potentially buy.

For more information or to confirm opening times feel free to send an email to [email protected] or phone the megastore on 01-4667474.

It doesn’t appear as if Rovers currently offer fans the chance to undertake a tour of Tallaght, you’re best bet is to get there early and have a wonder around before kick-off.

How to get to Tallaght Stadium

Where is Tallaght Stadium?

Shamrock Rovers’ stadium is located six miles south-west of Dublin, within the city centre of Tallaght on Whitestown Way. It is accessible through a number of different methods of transport as outlined below.

South of the ground there is a fairly large car park which is available for fans to use on matchdays on a first-come-first-serve basis, with The Square Shopping Centre across the ground also a viable alternative. If you do plan to use the spaces at The Square then please check the relevant signs before leaving your vehicle as there may be a maximum time limit enforced on matchdays.

As Shamrock Rover’s stadium is located next to Tallaght Business Park there are a number of nearby accommodation options with Maldron Hotel just across Kiltipper Road being the closest. Further along the N81 and on the other side of Sean Walsh Memorial Park is the Plaza Hotel, and the Abberley Court Hotel – both of which specialise in budget rooms.

Who plays at Tallaght Stadium?

What is the capacity of Tallaght Stadium?

As of 2023 Tallaght Stadium has an official seating capacity of 6,000 for Football matches.

When was Tallaght Stadium opened?

Covid Restrictions may be in place when you visit Tallaght Stadium in 2023. Please visit the official website of Shamrock Rovers for full information on changes due to the Coronavirus.