Thomond Park is a 25,630 capacity multi-purpose football stadium located in the famous Irish town of Limerick. Used for multiple sports including both variants of Rugby and Gaelic Football, it is home to association football team, Limerick FC whilst their ground is being renovated.

Since first opening in 1940 Thomond Park has unashamedly been a rugby stadium first, and football ground second with three out of four of the current tenants being rugby clubs compared to the single football team, Limerick FC. Traditionally Thomond Park was reserved for the larger, often one-off footballing occasions but as of 2012 Limerick FC are semi-permanent residents due to the ongoing redevelopment of their ground at Markets Field.

Famous for the deafening noise during the match and eerie silence when the players are kicking, it was voted as the “Best Rugby Stadium in the World” by Stadia Directory in August 2013 even beating the likes of Cardiff’s Millennium Stadium, and Brisbane’s Suncorp Stadium. For League of Ireland association football matches however it can be unfair to compare the atmosphere as the 25,000 plus capacity is very rarely filled.

Historically Thomond Park was leased for the biggest occasions such as against BSC Young Boys in the 1960 European Cup, Torino in the 1971 Cup Winners Cup or a friendly against Manchester City in 2012. During the construction of Ireland’s national stadium, Thomond hosted two international friendlies against Australia and South Africa with the matches attracting impressive crowds of 19,000 and 11,300 respectively.

The current form and design of the rugby stadium arose in 2006 after the Irish Rugby Football Union (IRFU) purchased the land adjacent to both sides of the pitch which paved the way for larger stands. Work began in early 2007 and finished around 18 months later in Autumn 2008 with the erection of four unique stands.

Although many foresaw the owners the IRFU opting to sell the naming rights ala The Aviva Stadium, so far no deal has been brokered for the ground, and thus at the moment the naming rights have been sold on a stand by stand basis.

Below is a seating plan of Limerick's Thomond Park: 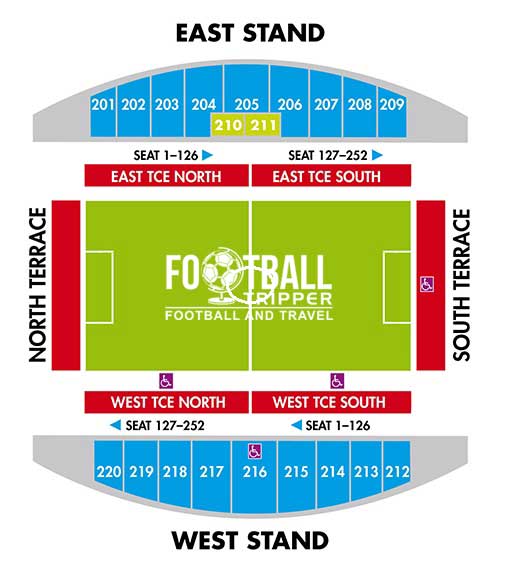 Away fans may either be pleased or displeased to know that there is no segregation between both sets of supporters which can certainly make for a strange atmosphere.

Although located next to the Moylish Park Campus of Limerick’s Institute of Technology there aren’t many places to drink at once you get to Thomond Park besides the Shannon RFC club house. Although there is a decent sized bar and beer garden, we’re unsure as to whether or not it opens for football matches.

Within Limerick City centre there are plenty of pubs to choose form with the popular Costello’s Tavern often the first port of call for many fans due to its proximity to the train station. For fans of traditional boozers there is the large Flannerys Bar, and Smyths Bar which both have a decent selection of ale, with The Locke Gastropub often a decent third choice. Located on the banks of the river with a seafood orientated menu, it is one of the more scenic places to drink from before kick-off.

Freda’s Fish and chips usually does a roaring trade on matchdays.

In addition to the club shop at the stadium which is open on matchdays, Limerick FC also operate an online store which compared to some other Irish team’s websites is actually pretty slick!

Sports fans can now visit Thomond Park’s usually restricted areas such as the changing rooms, Munster dug-outs and the pitch by undertaking a fully-guided stadium tour of the facilities including the museum.

Available Monday to Friday from 9.30 am onwards, tours can be arranged by either phoning 061-421109 or by sending an email to [email protected] Prices for 2015 are as follows:

How to get to Thomond Park

Where is Thomond Park?

The address for the stadium is simply:

There is very limited parking by way of 100 spaces located towards the north-east corner of the stadium, with public parking around the stadium not permitted on matchdays unless you are a local resident. It may be a better idea to park within Limerick City centre and then use public transport.

LimerickColbert Station within the city centre is the closest railway station to Thomond Park at approximately 2.5km away. The resulting journey by foot will take around 15-20 minutes and requires you to cross the River Shannon northwards.

There really aren’t any accommodation options within the immediate vicinity of Thomond Park with the majority of hotels located back towards the city centre. Here there is the likes of Limerick Strand Hotel, The Absolute Hotel and The Savoy if you fancy something slightly more upmarket. All are located no more than 10 minutes from Limerick Station.

Who plays at Thomond Park?

Irish side Limerick play their home matches at Thomond Park.

What is the capacity of Thomond Park?

As of 2022 Thomond Park has an official seating capacity of 25,630 for Football matches.

When was Thomond Park opened?

Thomond Park officially opened in 1940 and is home to Limerick

Covid Restrictions may be in place when you visit Thomond Park in 2022. Please visit the official website of Limerick for full information on changes due to the Coronavirus.