UCD Bowl or The Bowl is a multi-purpose sports stadium located in the eastern county of Dún Laoghaire–Rathdown. Used by UCD Rugby Club as well as the national rugby team for training sessions, the 3,000 capacity ground is also used by League of Ireland football team, University College Dublin A.F.C.

There has always been a number of sporting facilities and pitches within the Belfield campus of University College Dublin, however it wasn’t 2007 when the pitch next to the National Hockey Stadium was redeveloped into a multi-purpose sports venue courtesy of a €1.25 million Sports Capital grant that the UCD Bowl as we know it today came into existence.

Prior to this the University College’s football team played at a ground known as Belfield Park which was located just off of Foster’s Avenue towards the western perimeter of the campus – as shown by number 36 on the map below. Having played there since 1930 the stadium certainly had a lot of history but the facilities were slowly becoming dilapidated with the Main Stand constantly threatened with closure due to ongoing safety issues.

When the opportunity arose to relocate across to new shared facilities with the UCD Rugby Team, the football club leaped at the opportunity, and moved just in time for the 2008 League of Ireland after it satisfied F.I.A regulations. Consisting of a single-main stand capable of seating 1,500 as well as 1,500 safe standing places around the perimeter of the pitch, the new UCD bowl had a larger capacity than the old Belfield Park.

Previously UCD AFC had to install temporary seating whenever a big match game to town with the 2005 League Cup Final against Derry City requiring the club to install 300 additional seats at at a additional financial cost. Although the ground has yet to sell out the record attendance was set in October 2010 when 1,986 fans saw the team take on Shamrock Rovers.

The future of UCD Bowl is looking really positive with the location providing ample space for expansion should the demand for tickets ever necessitate it. The long term objective is to build a venue capable of seating 4,500 but for now the short-term goal is to construct a cantilever roof over the main stand to provide all seating sections with shelter from the elements.

Below is a seating plan of UCD's UCD Bowl: 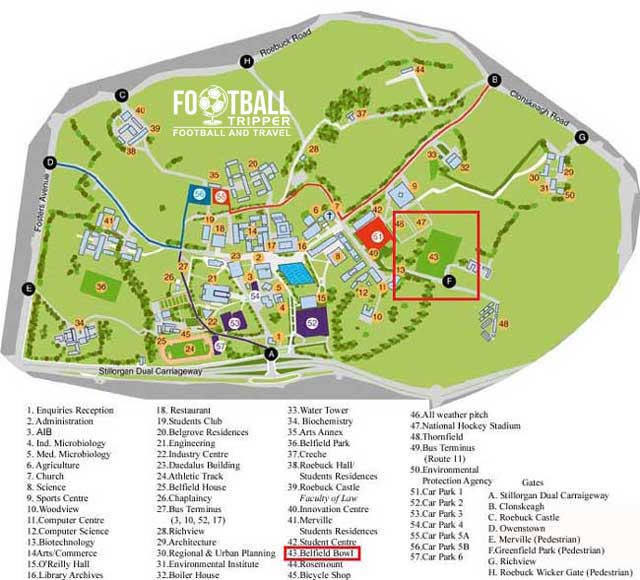 The Bowl is comprised of four stands: North, East, South and West.

Visiting supporters share the main stand with home fans, with seating towards the left-hand side furtherest away from the turnstiles usually reserved for away fans. The standard allocation is believed to be around 375, although this figure may now be outdated.

Located on a large campus one of the best places to grab a pint is the UCD Clubhouse Bar which sells a decent range of alcoholic beverages before and after kick-off.

Within the UCD Student Centre there is the Poolside Café which sells drinks (non-alcoholic) and snacks until around 8.45 pm each day, with delicatessen meals served until 8.00 pm each day. Inside the ground there is a stall located at the back of the main stand which sells a small range of warm food, confectionery, and a range of both hot and cold drinks.

A few years ago UCD’s football team had a dedicated online store, however it since appears to have closed down meaning that fans of the club can only really purchase merchandise on matchdays. An alternative which has a few official items is the University’s Online Shop itself, which sells a small range of clothing with the famous UCD logo on it (T-Shirts, Hoodies etc), although it isn’t really designed with football in mind.

It doesn’t appear as if the club currently offer an official tour of UCD Bowl, however University College Dublin often conduct campus tours for students and have open days so there’s always the opportunity to take a look around then. Of course, the UCD Bowl will form a very small part of any guided tour…

How to get to UCD Bowl

Where is UCD Bowl?

University College Dublin’s campus is located approximately 2 miles south of the city centre, and is accessible via a good range of public transport options.

The address for sat-nav is as follows:

On campus there are a handful of car parks which fans can safely use on matchdays with the main three located just inside of the N11/Stillorgan Road entrance, at the grey sports centre under the water tower, and besides the 5-aside astroturf pitches.

Avoid parking on-road and check all relevant signage before leaving you car as there are parking wardens who operate in the area, oh and ignore the new spaces right next to UCD Bowl. These are reserved for the football teams and guests of the club, not the general public.

The inner city is served by the excellent DART (Dublin Area Rapid Transit) metro lines, however the closest station to campus is located at Sydney Parade which is around 2km away from campus.

The closest hotel to UCD bowl is the Radisson Blue St. which is located south-east of the campus on Stillorgan Road, with Stillorgan Park Hotel 10 minutes further south also a viable option. For most people who are planning to make a weekend of it it would make much more sense to book something within the centre of Dublin where there is an abundance of choice.

Who plays at UCD Bowl?

Irish side UCD play their home matches at UCD Bowl.

What is the capacity of UCD Bowl?

As of 2023 UCD Bowl has an official seating capacity of 1,500 for Football matches.

When was UCD Bowl opened?

UCD Bowl officially opened in 2007 and is home to UCD

Covid Restrictions may be in place when you visit UCD Bowl in 2023. Please visit the official website of UCD for full information on changes due to the Coronavirus.