Franz Fekete Stadium is the multi-purpose home ground of local football team Kapfenberger SV. First opened in 1950, the stadium is capable of accommodating 12,000 supporters per match and like the majority of Austrian stadiums, is owned by the local council.

Franz Fekete Stadium was previously known as Alpenstadion when it first opened in the post-war period.

Below is a seating plan of Kapfenberger SV's Franz Fekete Stadium: 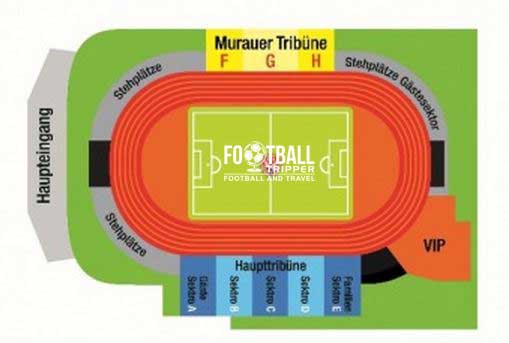 Away fans are housed within the south-east corner of the stadium behind the goal within a terraced section adjacent to Murauer Tribune.

You can purchase official merchandise from the stadium and online however there isn’t a fan shop of Kapfenberger SV per se.

There aren’t any tours available of Franz Fekete Stadium to the public as there isn’t really enough facilities to see!

Tickets to see Kapfenberger SV can be purchased online from the official website or in person at the stadium before kick-off on matchdays.

Please note that the above prices are based on Austrian First League matches.

Franz Fekete Stadium is located centrally within Kapfenberg less than 1.0 km from the traditional city centre.

There appears to be a large car park within the sports complex where the stadium sits although the matchday parking arrangements are unclear.

Kapfenberg Railway Station is centrally located within the heart of the city and is well connected to the rest of Austria with a number of long distance train services.

The closest major airport to the small city of Kapfenberg is Graz Airport which is 70 km or so south. The two cities are connected via a high-speed train service.

Within the sports complex where Franz Fekete Stadium is there is the four star Sporthotel Kapfenberg which is in an unbeatable location. Back towards the train station there is the new more affordable Pension Kaiserhof and the traditional Hotel Böhlerstern Gesellschaft m.b.H.