NV Arena is a small 8,000 capacity purpose-built football ground which has been home to SKN St. Pölten since opening in July 2012. Designed by agn Niederberghaus & Partner, the stadium is famous for its circular roof shape and for the way it blends into the natural landscape.

The stadium was inaugurated on 7th July 2012 with a mini football tournament between SKN St. Pölten, Austrian Champions SK Rapid Wien and Sparta Prague from neighbouring Czech Republic. As every match ended in a draw there was no winner, although the first competitive fixture saw the home side hammer First Vienna FC by a decisive 5-2 scoreline.

Below is a seating plan of SKN St. Pölten's NV Arena: 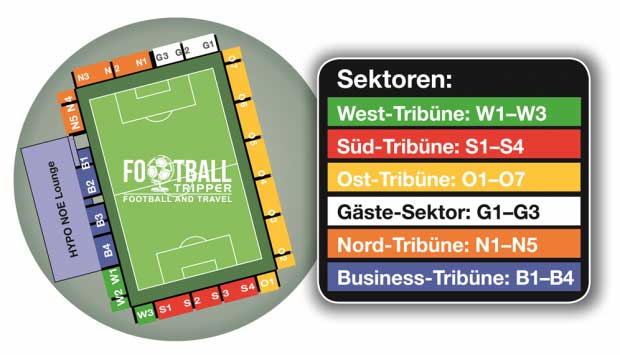 Away fans are housed within the north-east corner of the stadium within sections G1-G3 as per the above seating plan. Known as the Gaste-Sektor, visiting supporters stand in the northern stand with the home fans and tickets cost €10.00.

SKN St. Pölten merchandise is on sale at all home matches and is available to buy from the official website.

Stadium tours of NV Arena have been running since the Autumn of 2012 and are available for groups of 20-50 per session. To find out more information and to arrange a tour please send an email to [email protected]

Tickets to see SKN St. Pölten can be purchased online, and at the ground just before kick-off on matchdays.

Please note that the above figures reflect ticket prices for matches of the Austrian First League and not Bundesliga.

There are an estimated 800 parking spaces for vehicles across four car parks and enough room for an estimated 500 bicycles.

St. Pölten Hauptbahnhof is the main railway station of the city with the stadium essentially served by “St.Pölten Traisenpark” station.

At a distance of just under 90 km away, Vienna International Airport is the closest major airport to the city of Sankt Pölten in Lower Austria.

The majority of accommodation options within Sankt Pölten are to be found within the historic city centre in the around around the Cathedral. The most affordable option appears to be the three star Stadthotel Hauser Eck.