Wörthersee Stadion is a multi-purpose football ground which was constructed to host matches of the Euro 2008 Championships. Built at an estimated cost of €66.5 million with an initial capacity of 30,000, it is widely regarded as one of the most modern stadiums in Austria.

The original version of Wörthersee was a 10,900 capacity ground which featured an athletics track around the perimeter of the pitch. Home to two football teams which would later folded, SK Austria Klagenfurt and FC Kärnten, the construction of the new stadium was spearheaded by Jörg Haider, Governor of Carinthia, who wanted to bring top-flight sport to the local region.

Constructed over a two year period, the old stadium was demolished in 2005 to make way for the new stadium and the first ceremonial brick was laid a year later in 2006. Municipally owned and largely funded by the taxpayer, the ground’s naming rights were almost immediately sold to a local bank, becoming known as Hypo Arena before it had even opened.

Selected to represent Austria as  one of the country’s one of four venues of Euro 2008, or one of eight if you include Switzerland’s four. In total it hosted three matches of Group B: Germany v Poland (2-0), Croatia v Germany (2-1) and Poland v Croatia (0-1).

The inaugural football match was played a year previously between Austria and Japan in September 2007, and SK Austria Kärnten moved into Wörthersee Stadion in time for the start of the 2007/2008 season.

Designed by architect Albert Wimmer to host 30,000 seated supporters for International events, the capacity of Klagenfurt’s football ground has twice been reduced. For Austrian Football League matches the capacity sat at 18,000 until August 2015 when a court ordered the closure of the upper stands decreasing the capacity to 12,000.

Below is a seating plan of SK Austria Klagenfurt's Wörthersee Stadion: 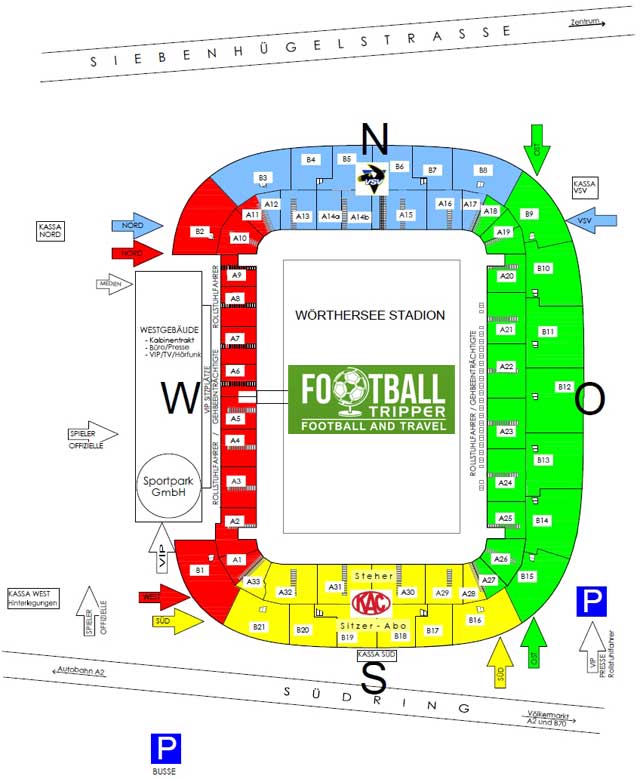 Away fans are housed in the northernmost section of the West Tribune with access granted via the north-west corner on Siebenhügelstraße. Tickets for visiting supporters usually cost a flat rate of €15.00.

Whilst you can purchase merchandise at the municipally owned stadium on matchdays there isn’t a permanent club shop.

Despite being one of the newest stadiums in Austria it doesn’t appear as if tours of Wörthersee and Sportpark Klagenfurt are currently available.

Tickets to see SK Austria Klagenfurt play at home can either be purchased from the club office during the week or on matchdays from the main ticket office outside the south stand which opens 60 minutes or so before kick-off.

Please note that the above numbers reflect ticket prices of the First Division, and are likely to increase for Bundesliga matches.

How to get to Wörthersee Stadion

Where is Wörthersee Stadion?

Wörthersee Stadion is situated out of town within Sportpark Klagenfurt approximately 5.1 km south-west of the city centre.

There are two decent sized car parks within Sportpark Klagenfurt which are accessible from Südring.

Klagenfurt Hbf is 3.8 km north-east of Wörthersee Stadion which equates to a walk of around 45 minutes.

Klagenfurt Airport is only 3 km away from the city centre and is the sixth busiest airport by passengers in Austria. Upon landing you can catch a train into the city centre from Klagenfurt-Annabichl.

Unless you want to walk even further out of town to the small town of Goritschitzen you will find the closest hotels back within the city centre. Close to the train station there is Alpen-Adria Stadthotel, Dachhotel Atrigon, and City Hotel Klagenfurt Zum Domplatz.

Who plays at Wörthersee Stadion?

What is the capacity of Wörthersee Stadion?

As of 2023 Wörthersee Stadion has an official seating capacity of 32,000 for Football matches.

When was Wörthersee Stadion opened?

What is the postcode for Wörthersee Stadion?

The postcode for Wörthersee Stadion is 9020.

Covid Restrictions may be in place when you visit Wörthersee Stadion in 2023. Please visit the official website of SK Austria Klagenfurt for full information on changes due to the Coronavirus.