Brann Stadion has been the home ground of Norwegian Premier League team SK Brann since 1919, and unsurprisingly today’s 17,686 capacity stadiums bears little resemblance to the once which first opened just under 100 years ago. Located in the city of Bergen, the Brann Stadion is approximately 3km south of the city centre.

The record attendance to date was set on 1st October 1961 when a reported 24,800 crammed into the stadium to see Brann take on Fredrikstad NM
in the semi-final of the Norwegian Cup.

Below is a seating plan of Brann's Brann Stadion: 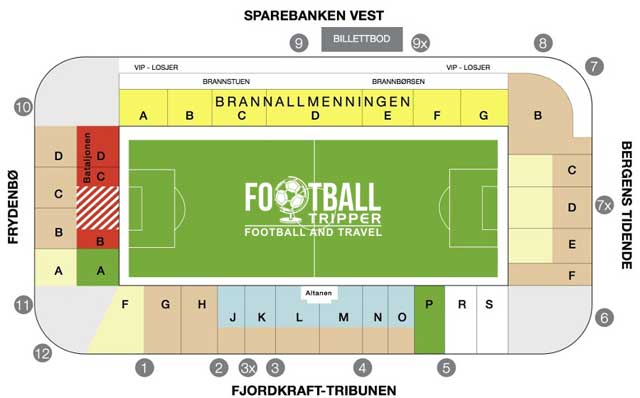 Away fans (Bortesupportere) are housed within sections R and S in the south-stand as per the white sections in the above seating plan.

Official merchandise of SK Brann can either be purchased online from the webshop or from the club shop at Brann Stadion which is open during the working week.

Whilst it doesn’t appear as if tours are available of Brann Stadion you could always scales Mount Ulriken by cable car as part of the Ulriken643 Panorama Tour which offers some breathtaking views of the city and its harbour.

Tickets to see SK Brann play at home Brann Stadion can either be purchased online in advance of the match, from the fan shop, or at the various ticket booths around the stadium which open on matchdays.

Be advised that the above priced are merely illustrative and can change slightly per fixture.

Despite being located out of town there doesn’t appear to be much parking available at the stadium itself.

Bergen Railway Station is located in the city centre and thus isn’t very practical for those looking to travel to Brann Stadium.

Bergen International Airport is located within Flesland less than 20 km from the city centre. Upon landing you can catch one of the numerous shuttle buses to the city centre.

There aren’t any places to stay within the area of Minde where Brann Stadium is situated which means you will have to look to the harbour area for most of Bergen’s accommodation options. Three well-priced options are Thon Hotel, Radisson Blu, and the no thrills basic hotel Bergen.