Sør Arena officially opened on 15th April 2007 with the inaugural match contested between home side IK Start and visitors Viking FK. Played in front of 14,448 supporters, the opening match currently holds the attendance record. After some sections of seating were converted into advertising space at the start of the 2011 season which reduced the capacity to 11,700, it’s unlikely that this record will be beaten in the foreseeable future.

Replacing IK Start’s old Kristiansand Stadium which first opened in 1948, Sør Arena was a marked improvement to the old municipal stadium which featured an athletics track around the perimeter of the pitch. Inspired by Aker Stadion, the new stadium adheres to UEFA’s stadium criteria, and subsequently features executive seating options and a press section amongst other modern conveniences.

Costing an estimated 400 million NOK for the entire Sports Complex, of which around 250 million was spent directly on the football ground, the budget for Sør Arena unfortunately spiralled out of control. Privately funded by a subsidiary of IK Start, the stadium’s owners faced financial ruin. This resulted in the creditors, Sparebanken Sør, taking over the stadium.

Originally known as Kristiansand Arena, the locally based bank who now own the stadium signed a 40 year lease agreement with IK Start on 23rd December 2008. IK Start initially wanted to sell the stadium to the municipality of Kristiansand but this was rejected, and it has become known as Sparebanken Sør Arena ever since.

Following on from the precedent set by the Color Line Stadion, Sør Arena replaced its natural playing surface with a type of artificial turf at the start of the 2012 season. Despite protestations from IK Start and the Norwegian Players’ Association (NISO), the local council is yet to reverse its decision.

Below is a seating plan of Start's Sparebanken Sør Arena: 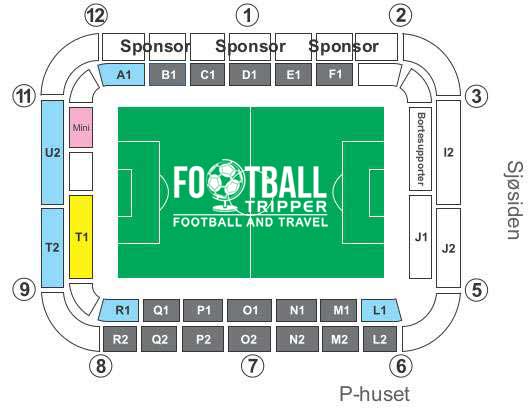 The Sor Arena is comprised of four stands: North, East, South and West.

Away fans (Bortesupportere) are housed within the lower-tier of the Sjosiden Stand which appears to be the eastern goal-end. Visiting supporters can gain entry into the stadium via gate 3 which overlooks Torsvika.

Official merchandise of IK Start can be purchased online from the club’s official webstore.

It doesn’t appear as if any tours are publicly available of the facilities at Sør Arena. Should IK Start ever change this we’ll be sure to update this section.

How to buy Start Tickets

Tickets to see IK Start can be purchased via the usual Norwegian channels including online from the official website, and from the ticket office at the stadium which is open during the week.

Expect to pay around 150 NOK for a place in the fan section and around 250 NOK for a seat within the main tribune.

How to get to Sparebanken Sør Arena

Where is Sparebanken Sør Arena?

There is a limited amount of parking available at the stadium however we’re unsure as to the exact matchday arrangements.

Kristiansand Railway Station is located out of town approximately 3.2 km west of Sør Arena within the Bellevue district.

Kristiansand Airport is situated 15 km north-east of the city centre along the E18/41 within the area of  Kjevik. Ground transportation comes in the form of coaches, rental cars and taxis.

West of IK Start’s ground within the area of Posebyen close to Kristiansand’s train station is the city’s main accommodation hotspot. Here there is the familiar names of a Comfort Hotel, Radisson Blu and Thon Hotel, as well as lesser known but First Hotel and Sjøgløtt Hotell.

Who plays at Sparebanken Sør Arena?

What is the capacity of Sparebanken Sør Arena?

As of 2023 Sparebanken Sør Arena has an official seating capacity of 14,563 for Football matches.

When was Sparebanken Sør Arena opened?

What is the postcode for Sparebanken Sør Arena?

The postcode for Sparebanken Sør Arena is 4632.

Covid Restrictions may be in place when you visit Sparebanken Sør Arena in 2023. Please visit the official website of Start for full information on changes due to the Coronavirus.