Gamla Ullevi is a multi-purpose football stadium located in the second largest city in Sweden, Gothenburg. First opened in 2009, the arena replaced the city’s previous stadium which is also bore the name “Gamla Ullevi”, and is home to no less than four football clubs: BK Häcken, GAIS, IFK Göteborg and Örgryte IS.

The new Gamla Ullevi officially opened on 5th April 2009 with a match between Örgryte IS and GAIS which was attended by a crowd of 17,531. Built over a two year period between 2007 and 2009, this version of the stadium is the third iteration of Gamla Ullevi after the original in 1916, and the heavily rebuilt version which hosted matches of the 1958 World Cup,

Costing an estimated 335 million SEK, the new stadium has attracted a lot of criticism since opening as the design has said to resemble stadia of the 1980s, rather than the post-millennium period. The entire decision making process has been heavily scrutinised, and the decision to model the ground on Brøndby Stadion which required further renovation work upon opening has been seen by opposing politicians as baffling.

As Gamla Ullevi only just opened in 2009, there’s no possible way that it will rebuilt or teams will relocate to new stadiums within the foreseeable future. As the stadium has attracted lots of criticisms for its lack of “sex appeal” there’s a strong possibility that it could be eventual given a face-lift. However with any restyle likely to be funded by public funds it could prove very difficult to justify.

The National press has often discussed the idea of renaming Gothenburg’s stadium the “Gunnar Grens Arena” in honour of Gunna Gren who is widely regarded one of Sweden’s best ever footballers. After careful consideration the name “Gamla Ullevi” is likely to remain however, and for now a statue of Gunnar outside the ground is seen as the most appropriate tribute.

Below is a seating plan of BK Hacken & IFK Goteborg's Gamla Ullevi: 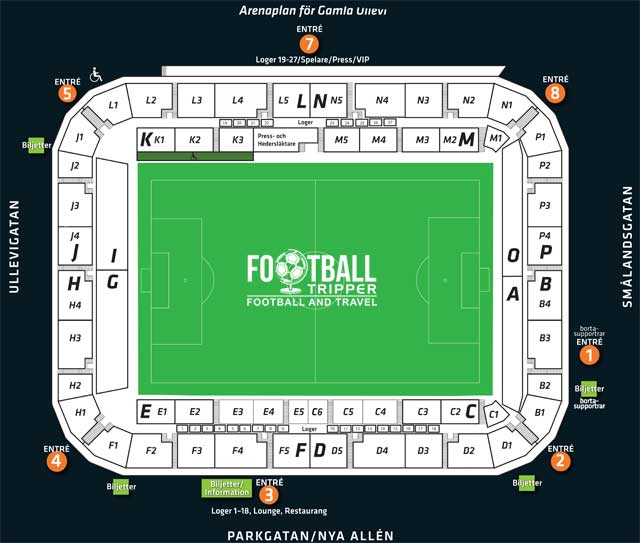 Away fans (Bortasupportrar) are housed behind the goals within the lower tiers in sections I and G, and O and A. How many of these sections are occupied depends purely on the number of visiting supporters.

IFK Göteborg have a fan shop located at Parkgatan street within the main stand of Gamla Ullevi in addition to an online store.

On matchdays the club shop is usually open from three hours before kick-off and for a short while after the full time whistle.

Despite being billed as “the Nordic Region’s most pleasant football stadium” it doesn’t appear as if you can take a guided tour of the facilities at Gamla Ullevi at this moment in time.

Tickets to see IFK Göteborg can be purchased through the usual Swedish Channels: Online from the official website (print @ home available), from the Scandinavium Arena ticket office (Monday to Friday 12.00 – 6.00 pm) and from the various ticket booths at the ground which open on matchdays.

Please note that tickets purchased on matchdays carry a 20 kronor surcharge, and there is a price increase for the highest profile games against the likes of Elfsborg, Malmo and AIK known as “Toppmatch”.

How to get to Gamla Ullevi

Where is Gamla Ullevi?

Gothenburg Central Station is the second largest railway station in Sweden after the one in Stockholm, and it has numerous services around the country as well as to the likes of Norway and Denmark.

Göteborg Landvetter Airport is located 20 km south-east of Gothenburg within the town of Landvetter which it inherits its name from. Upon landing you can travel into the city centre via bus which takes between 20-30 minutes depending on where you wish to get off.

Less than five minutes south of the ground there is Hotell Allen which is three stars, moderately priced and in an unbeatable location for Football Trippers. In the area around the station and across the other side of Kungsparken there is also the familiar names of Radisson Blu, Best Western and Comfort Hotel.

Who plays at Gamla Ullevi?

What is the capacity of Gamla Ullevi?

As of 2023 Gamla Ullevi has an official seating capacity of 18,416 for Football matches.

When was Gamla Ullevi opened?

What is the postcode for Gamla Ullevi?

Covid Restrictions may be in place when you visit Gamla Ullevi in 2023. Please visit the official website of BK Hacken & IFK Goteborg for full information on changes due to the Coronavirus.