Guldfågeln Arena is a football stadium located in the South East Kalmar island city of Kalmar. Used for one of the venues for the UEFA Women’s Euro 2013 tournament, the 12,500 capacity arena first opened in 2011 with an inaugural friendly between Kalmar FF and Djurgårdens IF Fotboll.

The inaugural match at Guldfågeln Arena was played on 11th April 2011 against Djurgårdens IF, and with an attendance of 11,852, the first ever match at the new stadium currently holds the attendance record. The all-seater capacity is 12,000, however for domestic matches where standing is permitted, Guldfågeln loses 1,500 seats, but gains 2,000 terrace places.

Constructed over a two year period between 2009 and 2011, the new stadium cost 250 million SEK, and was jointly financed by resident side Kalmar FF, the Municipality of Kalmar, and private investors Sveafastigheter. Sveafastigheter specialise in real-estate and it’s thought that there could be further commercial developments around the stadium in the future.

Guldfågeln Arena replaces Fredriksskans as Kalmar’s home stadium which dates back to the early 20th century. The club won its first ever Allsvenskan title in 2008, and subsequently demanded a better stadium for its league winning team.

The highest level of football ever held at the new stadium was a first round qualifier against Hungarian side Debreceni in the Champions League. Kalmar very nearly qualified for the group stages of the Europa League in the 2012/2013 season after defeating Cliftonville and NK Osijek, but failed at the final hurdle when they came up against Young Boys.

Kalmar FF’s stadium was nominated as one of seven venues for the Women’s Euro 2013 tournament. It hosted three matches in the group stages as well as a quarter final between Norway and Spain, which their Scandinavian neighbours won 3-1.

Below is a seating plan of Kalmar FF's Guldfageln Arena: 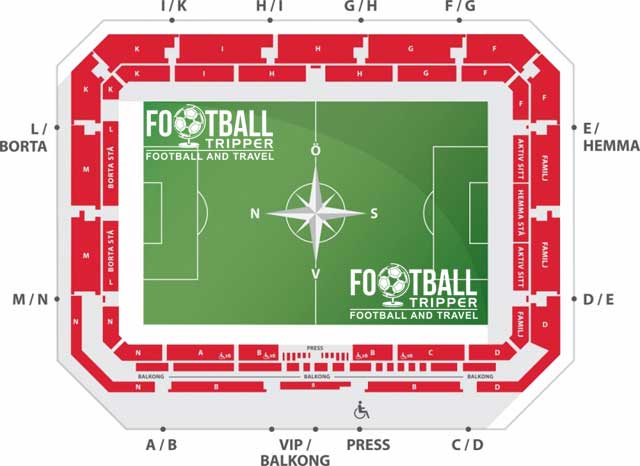 Away fans (Bortasupportrar) are housed within the lower section of the northern stand which is capable of accommodating 1,150 visiting supporters. Located behind the goal, the entrance to the Borta section is granted via Gate L.

Official merchandise of the club can be purchased online from the official store and from the stadium shop on matchdays which is located within the south-west corner.

As sexy as Guldfågeln Arena is it doesn’t appear as if stadium tours are available at this moment in time. Perhaps in the future.

How to buy Kalmar FF Tickets

Tickets to see Kalmar FF play at home can be purchased online from the official website, from Kalmar tourist office during the week, and from the various ticket booths which open 2 hours before kick-off on matchdays.

Please note that any seated tickets purchased on the day of the match carry a surcharge of 20 SEK whilst terrace places cost 10 SEK in order to cover additional staffing costs.

How to get to Guldfageln Arena

Guldfågeln Arena is situated 4.9 km north-west of Kalmar City centre in a very typical out of town location which is adjacent to the E22 motorway.

There are hundreds of parking spaces available across several car parks thanks to the out of town location.

Kalmar Central Station is the main railway hub for Kalmar County and has numerous daily services to the likes of Copenhagen, and Gothenburg amongst others on the Öresundståg line.

Kalmar Airport is located 5 km west of the urban centre just off of the E22 motorway. Scandinavian Airlines fly limited routes from here, most to Sweden’s capital, Stockholm.

The harbour area has the highest concentration of places to stay with the likes of Best Western, First Hotel Witt and Clarion Collection Hotel Packhuset all within five minutes of the Central station. Two of the more affordable options appear to be Hotell Hilda and Slottshotellet.

Who plays at Guldfageln Arena?

What is the capacity of Guldfageln Arena?

As of 2022 Guldfageln Arena has an official seating capacity of 12,500 for Football matches.

When was Guldfageln Arena opened?

What is the postcode for Guldfageln Arena?

The postcode for Guldfageln Arena is 393 56.

Covid Restrictions may be in place when you visit Guldfageln Arena in 2022. Please visit the official website of Kalmar FF for full information on changes due to the Coronavirus.