AFAS Stadion formerly known as DSB Stadion is the home stadium of Eredivisie football team, AZ Alkmaar. Opened just in time for the 2006/2007 season at a cost of €38 million, the ground which is located in Alkmaar, Noord Holland, has a current capacity of 17,023.

AZ Alkmaar’s stadium first opened on the 4th August 2006 with a preseason friendly held against English side Arsenal who were just coming off a Champions League Final Appearance.

The visitors spoiled the party with a three-nil victory but AZ made amends during the inaugural Eredivisie match by thrashing NAC Breda 8-1 in a thrilling encounter.

Both matches were exceptionally popular with fans, resulting in the 17,023 capacity stadium being sold which initially led to some question whether or nor the ground’s size was adequate.

Consisting of a single tier of seating, such is the design of AFAS Stadion, the capacity can theoretically be expanded to over twice the size if another level of seating is added.

Planning permission for such an endeavour was approved by the municipality of Alkmaar in 2010, however any construction work contained the caveat that improved transport infrastructure and further parking spaces were added for vehicles.

Currently the club don’t believe that such an investment would be economically viable and thus the plans for a 40,000 stadium are disappointingly yet to be realised.

AFAS Stadion is commonly referred to as Victorie Stadion by supporters who were originally perturbed by the club’s decision to sell the naming rights to the stadium’s name.

The unofficial name references the Eighty Years’ War and the turning point where Spanish troops were unable to effectively besiege the city of Alkmaar, thus forcing the invaders to retreat.

Below is a seating plan of AZ's AFAS Stadium: 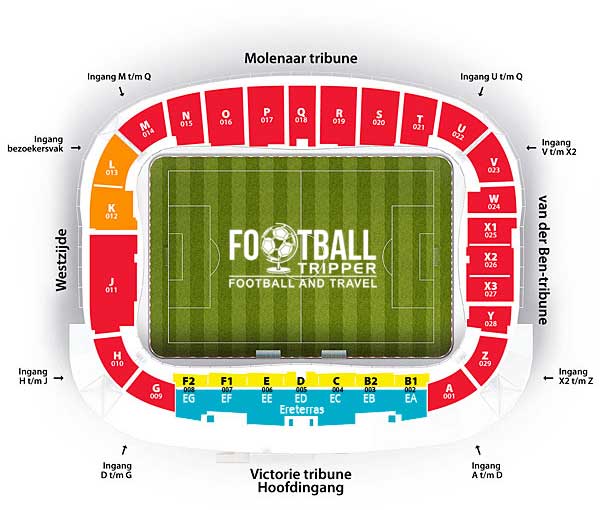 Away fans are housed within sections L and K which are collectively known as “bezoekersvak” or in English the visiting stands. Spread out across two blocks of seating across a single-tier, views from the north stand are impeccable as one would expect from a modern stadium.

At the stadium itself there is the Grand Cafe Van Gaal named after the legendary Dutch manager which is open to the public during the week.

With the exception of the AZ Almar’s online store, the fancentrum shop at AFAS Stadion is easily the best place to purchase official merchandise of Alkmaar Zaanstreek – the cheese farmers.

60 minute tours of AFAS Stadion are available for a minimum of four people at a time, six days a week with the exception of Sundays and matchdays.

Costing just 7.00 per person or 10.00 if you fancy a a free cup of coffee and fresh pastry at the Van Gaal Café, stadium tours can be booked by either phoning the club on 072 547 8000 or completing a form on the official website.

How to buy AZ Tickets

Tickets to see AZ in action at AFAS Stadion can be purchased online from the official website and generally cost around 20.00 – 35.00 euros for a seat behind the goals or towards the side of either grandstand.

It’s impossible to list comprehensive prices here as they vary depending on levels of demand and in response to who the competition is.

How to get to AFAS Stadium

Where is AFAS Stadium?

AFAS Stadion sits out of town next to the N9 and N242 ring roads approximately 3.0 km south of Alkmaar city centre. It can be walked to in anywhere between 35-45 minutes depending on how fit you are!

There are a total of nine club run car parks located within the immediate environs of AFAS Stadion with car parks 8 and 9 south of Alkmaar’s N242 Ring Road appearing to be unreserved on match days.

Alkmaar Railway station forms part of the Den Helder-Amsterdam Railway, and thus is well connected to Netherlands’s capital city which sits less than 40 km away.

The closest international airport to the city of Alkmaar is the Amsterdam Schiphol which is 48 km south. Upon landing you can catch the aforementioned train service to reach AFAS Stadion or simply hire a rental car.

The closest hotel to AFAS Stadion is undoubtedly the Golden Tulip however as its rated as four stars, it’s hardly the most affordable of accommodation options.

Back towards the city centre and around the train station you will find a more varied range of options including Stad en Land, Familie Hotel Alkmaar and the popular King’s Inn City Hostel, Hotel & Restaurant.

Who plays at AFAS Stadium?

Dutch side AZ play their home matches at AFAS Stadium.

What is the capacity of AFAS Stadium?

As of 2023 AFAS Stadium has an official seating capacity of 19,500 for Football matches.

When was AFAS Stadium opened?

AFAS Stadium officially opened in 2006 and is home to AZ

What is the postcode for AFAS Stadium?

The postcode for AFAS Stadium is 1812.

Covid Restrictions may be in place when you visit AFAS Stadium in 2023. Please visit the official website of AZ for full information on changes due to the Coronavirus.