Stadion Galgenwaard is a purpose built football stadium located in the fourth largest city in Netherlands, Utrecht. Home to local team of the same name, Football Club Utrecht, the 2004 built ground has a capacity of 24,426 and occasionally hosts matches of the Dutch national team.

Stadion Galgenwaard has been the home ground of FC Utrecht since 1930 but today exists in a complete different form having been completely rebuilt at the turn of the millennium. Before this, the first iteration of the “New Galgenwaard” opened on the 21st April 1981 when the club hosted PSV Eindhoven in the inaugural friendly match match.

Sadly, just 20 years later as stadium designs and the expectations of the matchday experience had once again changed with the advent of the all-seating, modern day stadium becoming popular in England since the inception of the Premier League  in 1992. FC Utrecht adapted their stadium by rebuilding three out of four stands across a two year period.

Initially the club relocated the main stand and rebuilt it during the 2001 and 2002 season, and afterwards tended to the remaining two sections along the side of the pitch resulting in today’s 24,426 capacity stadium.

The ground then acquired its current name of Stadion Galgenwaard in January 2002, and over the years has hosted a variety of sporting events including matches of the 1998 Hockey World Cup and the Football Youth Championships in 2005.

FC Utrecht’s ground has also hosted a handful of matches of the Dutch national team including a 3-0 friendly defeat against Sweden in 1983 and a victory against Liechtenstein in 2004. For the foreseeable future it appears as if the club will continue to play at Galgenwaard as a 2009 feasibility study failed to demonstrate any business case for building a new ground.

Below is a seating plan of Utrecht's Stadion Galgenwaard: 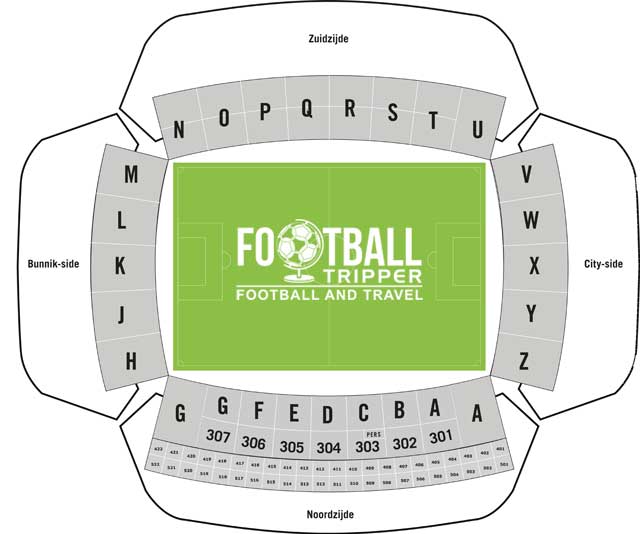 Away fans are usually housed within sections V and W within the western goal-end which is known as the City-Side stand. Views are partially restricted by the use of perimeter fencing which separates the travelling supporters from the pitch.

With the exception of the online store, the FC Utrecht Fanshop located next to the main entrance of Galgenwaard Stadium to the north is easily the best place to purchase official merchandise from.

Tours of the facilities at Galgenwaard are available during normal office hours Monday to Friday at a cost of around €10.00 per person although slight discounts are available for those in groups larger than 10.

Lasting for around 70 minutes in total, the stadium tour also takes you through the new museum and is conducted by an expert of the club which means you get an unparalleled insight into the history of the club and its inner workings.

How to buy Utrecht Tickets

Tickets to see FC Utrecht play at Galgenwaard can be purchased via the usual channels including online and at the stadium ticket office in the days leading up to the match,

Expect to pay around 20.00 for a place behind the goals and anywhere between €25.00 – €40.00 euros for something central in either of the grandstands.

How to get to Stadion Galgenwaard

Where is Stadion Galgenwaard?

Stadion Galgenwaard sits 2.6 km south-east of Utrecht city centre which means that the average Football Tripper can easily make the journey by foot in just under 35 minutes.

There are a number of car parks around the ground which offer shuttle bus services on matchdays, however the club still encourages its fans to take public transport where possible.

Parking around the immediate residential areas is forbidden on matchdays so you may wish to get there early just to scout out the area and to avoid any unnecessary stress.

Utrecht Centraal is the main railway station of the city and is served by numerous intercity services to all of Netherland’s major cities.

The closest international airport is Schiphol Amsterdam which is approximately 53 km north of Utrecht. From the Centraal Station there is a direct train service which leaves ever 15 minutes and takes just over 30 minutes in total.

As there are no hotels within the immediate environs of Stadion Galgenwaard or indeed within the Rubenslaan side of town, you’re looking back towards the city centre for accommodation options.

There’s at least half a dozen options for you to choose from near to the central station including Park Plaza Utrecht, Hotel NH, and the Apollo Hotel.

Who plays at Stadion Galgenwaard?

Dutch side Utrecht play their home matches at Stadion Galgenwaard.

What is the capacity of Stadion Galgenwaard?

As of 2023 Stadion Galgenwaard has an official seating capacity of 24,426 for Football matches.

When was Stadion Galgenwaard opened?

Stadion Galgenwaard officially opened in 2004 and is home to Utrecht

What is the postcode for Stadion Galgenwaard?

The postcode for Stadion Galgenwaard is 3584 AA.

Covid Restrictions may be in place when you visit Stadion Galgenwaard in 2023. Please visit the official website of Utrecht for full information on changes due to the Coronavirus.