Polman Stadion is the home ground of regular Eredivisie staple, Heracles Almelo. Built in 1999 with a capacity of small 8,500 and a made from artificial turf, the club have announced plans to relocate to a new 15,000 capacity stadium, although there’s no confirmation when this will happen.

Polman Stadion first opened on the 10th September 1999  in time for the upcoming season with the inaugural match held against FC Zwolle in the Eredivise. Constructed at a time when Netherlands were set to co-host Euro 2000 with Belgium, the 90s represented a period of growth for football in Holland as numerous clubs began to construct new stadiums.

Heracles Almelo’s previous stadium, Bornsestraat, dated back to the early 20th century with the club using the ancient facilities for a period of 90 years between 1909 until 1999 when they moved to the brand new Polman Stadion.

The new stadium was initially constructed with a smaller 6,900 capacity but early demand for season tickets led to the club expanding the stadium to the current 8,500 capacity in 2005.

Currently the club are assessing the feasibility of expanding the ground to anywhere between 10,000 – 13,500 with Almelo city council earmarking over €8.2 million in funds to assist Heracles in its project.

The club formalised arrangements on the 13th January 2014 with the club announcing the objective of expanding the current ground in time for the 2016 season. Renovation is currently taking place and will see the addition of a second tier of seating.

Below is a seating plan of Heracles Almelo's Polman Stadion: 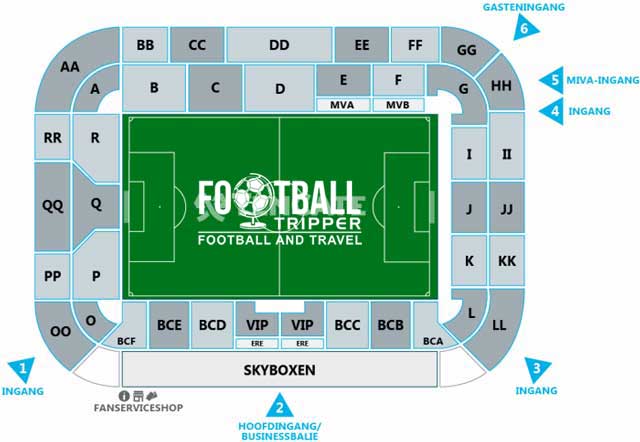 Away fans are housed within the south-east corner of the stadium within sections GG, GH in the upper tier and G in the lower section.

Until the renovated stadium opens and we know the exact opening times of the club shop you might want to purchase your official merchandise from the online store.

We’ll update this section as soon as we know whether or not stadium tours will be available of the new facilities at Polman Stadion.

How to buy Heracles Almelo Tickets

Tickets to see Heracles in action at the new Polman Stadion can either be purchased online or in person from the ticket office in the days leading up to the match. If any tickets remain on the day of the match they will be available to buy from the FanServiceShop.

Please note that there is a surcharge of 5.00 for the the highest profile matches against the four largest teams in the country: Ajax, Feyenoord, PSV and FC Twente.

How to get to Polman Stadion

Where is Polman Stadion?

Polman Stadion is located 2.3 km south of Almelo railway station within the Ossenkoppelerhoek district. From the approximate city centre the average Football Tripper should be able to walk to the ground in just under 30 minutes.

There is a medium size car park to the left of the stadium however the matchday parking arrangements mean it is usually reserved for those with pre-bought parking permits only.

Almelo railway station has is well connected to the rest of the Netherlands with numerous Intercity and Sprinter train services to major cities such as Utrecht and Den Haag.

The closest airport to the city of Almelo is technically Münster Osnabrück 101 km away in Germany, however the one in Groningen is only 7 km further away.

Amsterdam-Schiphol, the largest international airport in Netherlands is 159 km away and is connected to Almelo by a direct train service.

As there are no hotels within the immediate vicinity of Polman Stadion you’re looking at a 25 minute walk back towards the centre of town. Here you will find limited accommodation options with the Theaterhotel, Huis Van Bewaring and Preston Palace being the three most suitable options.

Who plays at Polman Stadion?

What is the capacity of Polman Stadion?

As of 2023 Polman Stadion has an official seating capacity of 8,500 for Football matches.

When was Polman Stadion opened?

What is the postcode for Polman Stadion?

The postcode for Polman Stadion is 7609.

Covid Restrictions may be in place when you visit Polman Stadion in 2023. Please visit the official website of Heracles Almelo for full information on changes due to the Coronavirus.