Stadio Olimpico Serravalle or San Marino’s National Stadium is the multi-purpose ground of the men’s national football team. Capable of seating 6,664 supporters or 20% of the population, the Republic of San Marino boasts little over 32,000 citizens.

San Marino’s national stadium first opened back in 1969 when it was used to host the football matches of S.S Juvenes who would later go on to merge with G.S Dogana in 2000 to become A.C Juvenes/Dogana.

Despite containing an athletics track around the perimeter of the pitch, the stadium is predominantly used to host the football matches of the newly formed team. Until the 2006/2007 season Juvenes/Dogna were a member of the Italian Football League after they withdrew to compete within San Marino’s domestic league, Campionato Sammarinese di Calcio.

Unfortunately for San Marino a lot of the records and history regarding Stadio Olimpico in Serravalle are centred around how big the team’s defeats were. The largest defeat to date was set in September 2006 when Germany defeated San Marino by 13 goals to nil.

San Marino national team’s only win game during a 2004 friendly against Liechtenstein, however the Under 21 side also pulled off a shock victory against Wales in 2013. Both games shared a narrow 1-0 scoreline. 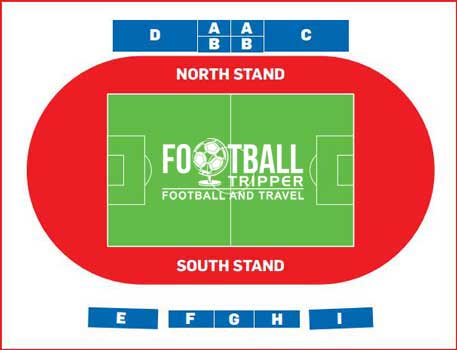 For England’s 2014 World Cup Qualifier back in March 2013, the official England Supporters Club were given an allocation of 2,600 tickets. The travelling supporters occupied the entire South Stand (Blocks E, F, G, H and I), as well as some seats within Block C.

With the travelling supporters often taking up to 40% of the seats the away fans can often control the noise levels, and thus it can often feel like a home game in some respects.

Transport is often arranged by the travelling country’s Football Associations to and from both Rimini and the historic centre of San Marino.

The map below outlines some potential places to drink around Stadio Olimpico however as there are no reviews we can’t vouch for a lot of the places!

Entry to the stadium requires Photo ID for International Matches, and a lot of the football associations/federations require fans to their collect their tickets before kick-off.

Always check with your football federation the exact arrangements regarding tickets!

How to get to Stadio Olimpico – San Marino

Where is Stadio Olimpico – San Marino?

Stadio Olimpico sits within the city of Serravalle within a wider sports complex which also contains an Olympic sized swimming pool and baseball stadium.

With a population of just over 32,000 unsurprisingly San Marino lacks its own airport. The closest major airport Rimini is approximately 16 km away from City of San Marino, and is officially named after Italian film-maker Federico Fellini.

The good majority of hotels within San Marino are situated on SS72 which is the country’s main road which connects Città di San Marino to Rimini and the rest of Italy.

Hotel Il Monte and Hotel Dogana are the two closest places to stay followed by a Best Western and Hotel Main Street. The Seaside town of Rimini has many more options – many which overlook the sea such as Hotel Niagara, Hotel Europa and Hotel River.

What is the capacity of Stadio Olimpico – San Marino?

As of 2023 Stadio Olimpico – San Marino has an official seating capacity of 6,664 for Football matches.

What is the postcode for Stadio Olimpico – San Marino?

The postcode for Stadio Olimpico – San Marino is SM 47890.

Covid Restrictions may be in place when you visit Stadio Olimpico – San Marino in 2023. Please visit the official website of San Marino National Team for full information on changes due to the Coronavirus.