Rheinpark Stadion is a football stadium located in the city of Vaduz within the Principality of Liechtenstein. Home to the national football team Liechtenstein, as well as Swiss League side FC Vaduz, the ground first opened in 1998 and has a modest but adequate capacity of 7,584.

Rheinpark Stadion first opened on the 31st July 1998 with a friendly match between resident side, FC Vaduz, who were the current Liechtenstein Cup holders at the time and then Bundesliga Champions 1. FC Kaiserslautern. Located within the microstate of Liechtenstein which borders Switzerland and Austria with a population below 38,000, unsurprisingly the home side lost 8-nil to their larger German counterparts.

Sitting on the banks of the River Rhine which is where the stadium inherits its name from, Rheinpark Stadion is a few yards from the Swiss Border situated within the town of Vaduz which acts as the capital city of Liechtenstein.

Constructed at a cost of 19 million Swiss-Francs which equates to around 15.8 million, the stadium has a maximum capacity of 7,584 which includes a reported 5,873 seats.

As the sole representative of Liechtenstein within Swiss Football, FC Vaduz have always been one of the smallest teams in the league since forming in 1932. As regular winners of the Liechtenstein Football Cup, the club were granted entry into the now defunct UEFA Cup Winners’ Cup but failed to progress further than the first round.

Rheinpark Stadion hosted the likes of Chornomorets Odesa and Paris Saint-Germain in this tournament but failed to progress past the qualification rounds. As well as hosting matches of the National football team in Liechtenstein, Rheinpark hosted a pre-season friendly between Liverpool and Olympiacos in 2005.

Below is a seating plan of Vaduz's Rheinpark Stadion: 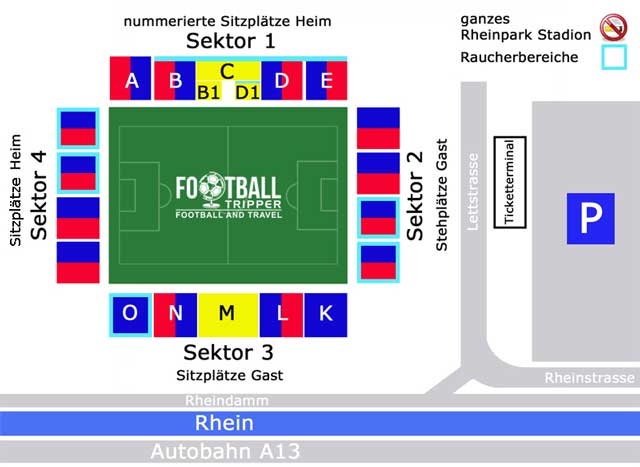 For Swiss League matches the away fans are housed within Sector 2 which is the southernmost goal-end. Usually confined to the western half, tickets for visiting supporters cost a more than reasonable 25.00 CHF.

Although you should be able to purchase FC Vaduz Merchandise from Rheinpark Stadion on matchdays there doesn’t appear to be a permanent club shop which is open during the week. You could always check out FC Vaduz’ online store instead.

Sadly there aren’t any stadium tours available of the current facilities, maybe one day.

How to buy Vaduz Tickets

Tickets to see Liechtenstein’s premier football team play football can either be purchased online from the official website or in person from the ticket office before kick-off on the day of the match.

Please note that seating is unreserved within sectors 3 and 4 which means you can sit where you want as long as you get there early enough.

How to get to Rheinpark Stadion

Where is Rheinpark Stadion?

Rheinpark Stadion sits less than 1 km west of Vaduz city centre on the eastern bank of the Rhein River. Vaduz holds the distinction of being one of the few capitals in the world to lack its own airport and railway station.

There are a limited number of free parking spaces located at Rheinpark Stadion on matchdays which are allocated on a first-come first-served basis.

The nearest airport to Vaduz in Liechenstein is St.Gallen-Altenrhein Airport in Switzerland, however many regard the International one Zurich to actually be the closest major one. This is approximately 120 km away and can be reached by car in just over two hours.

The three closest accommodation options to Rheinparkstadion are Hotel Engel, Hotel Real and the pricey Residence Hotel – all 10 minutes east along Lettstrasse.

From central you can find even more places to stay if you travel either north and south along the “28” main road.

Who plays at Rheinpark Stadion?

Liechtenstein side Vaduz play their home matches at Rheinpark Stadion.

What is the capacity of Rheinpark Stadion?

As of 2023 Rheinpark Stadion has an official seating capacity of 7,584 for Football matches.

When was Rheinpark Stadion opened?

Rheinpark Stadion officially opened in 1998 and is home to Vaduz

Covid Restrictions may be in place when you visit Rheinpark Stadion in 2023. Please visit the official website of Vaduz for full information on changes due to the Coronavirus.