Cashman Field is a Football Stadium located in downtown Las Vegas, and is home to USLC side Las Vegas Lights FC. It has a very distinctive Baseball feel with just 2 stands and a noticably square field, but was converted for Football use in 2018.

Cashman Field was first opened in 1983 by the Las Vegas Convention and Visitors Authority, though not as a soccer stadium, but to host the Pacific Coast League Baseball team, Las Vegas 51s. But the stadium also had plenty of use in the Major Leagues, hosting many MLB exhibition matches, the Chicago White Sox vs Chicago Cubs in 1993 being the largest attended game to date.

The original Cashman Field has its roots further back than 1983, and another stadium named Cashman Field was built on the same location in 1947 until it was demolished to make way for the modern Cashman Field.

Las Vegas 51s, who changed their name to Las Vegas Aviators in 2019, would spend many happy years at the Cashman Field. However, during the later part of their tenancy, serious problems started to emerge. All of the rooms and equipment at the ground were seen as outdated and not suitable for a Tripe A Baseball team in 2015.

In addition to the problems with the facilities, there was also a big problem with the sewage, which caused one hell of a stink in the dugout. For these reasons, it seems that Las Vegas 51s felt they had to move to the more modern Las Vegas Ballpark.

But it wouldn’t be until 2018 that we here at Football Tripper became officially interested in Cashman Field when they acquired The USLC Soccer Team Las Vegas Lights FC as tenants. The ground itself was perfectly suited for the shape of a soccer pitch but still underwent further alterations in April 2019 to truly convert it into a Soccer stadium.

However, Las Vegas Lights FC could have a very short tenancy at the Cashman Field, as a proposed 25,000 Soccer stadium may be built on the same site as Cashman Field.

Below is a seating plan of Las Vegas Lights FC's Cashman Field: 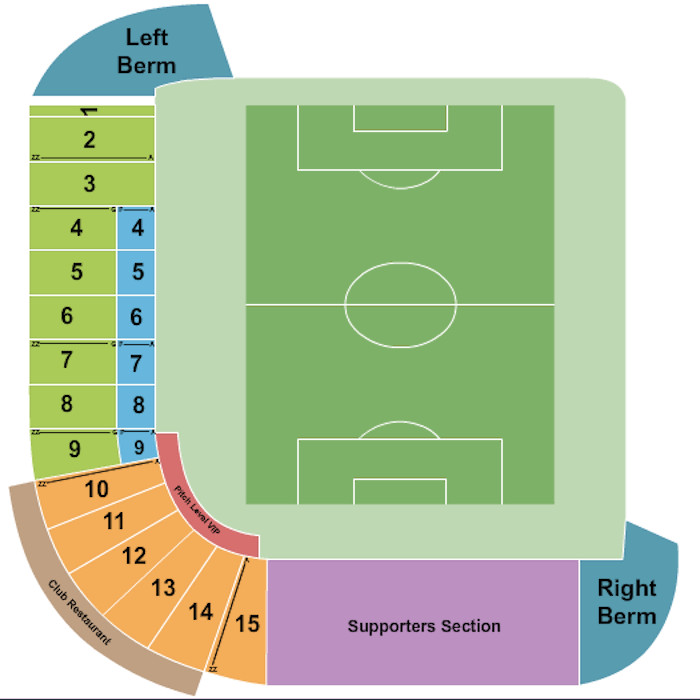 How to get to Cashman Field

Where is Cashman Field?

Who plays at Cashman Field?

What is the capacity of Cashman Field?

As of 2022 Cashman Field has an official seating capacity of 9,334 for Football matches.

When was Cashman Field opened?

Covid Restrictions may be in place when you visit Cashman Field in 2022. Please visit the official website of Las Vegas Lights FC for full information on changes due to the Coronavirus.