CenturyLink Field formerly known as the Seahawks Stadium between 2002-2004 after the NFL team which resides there, is a multi-purpose sports venue located in Seattle, Washington. The 67,000 capacity stadium is made smaller for Major League Soccer matches with the capacity decreased to around 38,300 when local side The Seattle Sounders play their fixtures here.

Originally known as the Seahawks Stadium and later associated as Qwest followed by CenturyLink, the 67,000 capacity outdoor stadium first opened in 2002 after a gruelling four year construction period. Costing an estimated $565 million adjusted to today’s prices, CenturyLink Field is an impressive sight to behold and was primarily built host NFL matches of the Seattle Seahawks.

It wasn’t until seven years later after opening in 2009 that the Seattle Sounders Soccer Team moved into the state-of-the-art facilities at the start of the season after becoming the 15th franchise to enter Major League Soccer. The first competitive fixture of the Sounders inaugural season was a three nil victory against the New York Red Bulls.

Prior to this CenturyLink Field had been used to host exhibition Soccer matches of major European Teams such as Chelsea, Barcelona and Real Madrid, with one fixture between Man United and Celtic in 2003 even attracting a sell out crowd of 66,772. Identifying an untapped market for soccer, the Seattle Seahawks owner established The Sounders Franchise and immediately moved them into Centurylink.

Although one might suspect the stadiums facilities to be inadequate for soccer matches, the ground actually meets FIFA sight line requirements and even has comparable camera locations to smaller sports venues. The atmosphere during NFL games is famous for breaking noise records, and although the average crowds are smaller for soccer matches the acoustics helps to carry the noise well.

Sell-out Soccer attendances at the Seahawks Stadium are becoming increasingly common as interest in the sport grows, with derby matches against the Portland Timbers all but guaranteed to attract a full house. There has been talk in recent years of an American World Cup Bid, and CenturyLink field continues to be cited as a prime example of the country’s capabilities as hosts.

Below is a seating plan of Seattle Sounders's Lumen Field: 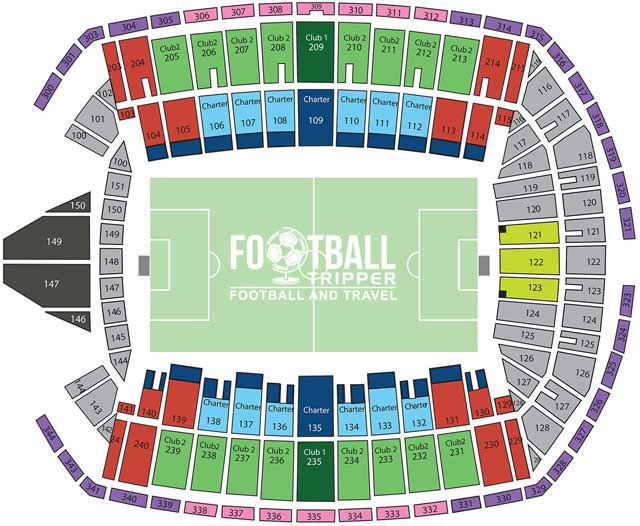 The Sounders recommend five or so pubs within the immediate vicinity of the stadium in addition to the concourse area which sells prematch Pints for $5.50 for MatchPass Members.

Located north of the ground there is Kells Irish Restaurant & Pub, The Lodge Sports Grille and Fuel Sports. On the corner of CenturyLink Field comlplex there is a Quality Athletis pub which is also an official partner of the soccer club.

Inside CenturyLink there are numerous kiosks selling alcoholic beverages as well as the very American service of “Roving Vendors” which travel around the stand during the matches.

At CenturyLink there is the Pro Shop which sells merchandise for both the Seattle Seahawks NFL team, and Seattle Sounders F.C. Whilst it’s guaranteed to be open on game days, we can’t currently confirm opening times for the rest of the week so if you want to purchase some Sounders gear you should try the official MLS Online Store.

Tours of the impressive CenturyLink Field are available throughout the year, with slots available to the general public on Fridays and Saturdays at either 12.30 pm or 2.30 pm. Lasting approximately 90 minutes, the tour begins at The Seahawks Pro Shop where you can purchase a ticket and then you are taken around the usually restricted areas such as the locker rooms and pitch side.

For more information about the tour you can either phone the stadium operators on (206) 381-7582 or use this contact form. Please note that tours are not currently available to book online.

How to buy Seattle Sounders Tickets

Individual tickets to see the Seattle Sounders FC in action can be purchased online via their official partner Ticketmaster. Usually prices range between $35 for corner seats and up to $135 for central VIP seats which are close to the half-way line.

The link takes you to the club’s official ticket vendor and the page has an interactive seat chart which allows you to select your preferred seats, check out the view and compare prices.

At CenturyLink Stadium the box office it located in the northwest corner, and is usually open Monday – Friday, 10.00 am – 5.00 pm and Saturdays 10.00am – 2.00pm. It is never open on Sundays unless there is a sporting fixture on.

How to get to Lumen Field

Where is Lumen Field?

Located just off the junctions of I-5 and I-90, CenturyLink Field is highly accessible by both car and public transport.

The two nearest car parks known as The North Lot and CenturyLink Field Event Center Garage are generally sold out on a season by season basis, and thus The Union Station garage on 4th avenue or the Metro Transit garage are more suited to those attending a one-off match.

Please note that Tailgating is permitted within the North Lot only, and the usual safety rules apply.

The Amtrak Cascades Train service is one of the most popular ways to travel to the game for those coming from out of town. The train station, Seattle King Street is right next to the field, and connects the city to Portland, Bellingham and Southwest Washington.

To view the complete route and to book tickets check out the Amtrak website.

The closest hotel to CenturyLink Field is the Silver Cloud Hotel however it is also the most expensive. Slightly further northwards towards the downtown area there is much more choice including the likes of Best Western on Pioneer Square and the affordable Quality inn.

Who plays at Lumen Field?

What is the capacity of Lumen Field?

As of 2022 Lumen Field has an official seating capacity of 38,300 for Football matches.

When was Lumen Field opened?

What is the postcode for Lumen Field?

Covid Restrictions may be in place when you visit Lumen Field in 2022. Please visit the official website of Seattle Sounders for full information on changes due to the Coronavirus.