Sporting Park, formerly known as Livestrong Sporting Park after disgraced cycling cheat Lance Armstrong’s company, is a 18,467 capacity purpose built Soccer Stadium in located in Kansas City. Home of Major League Soccer Club Sporting Kansas City since 2011, fans refer to the ground as both “The Blue Hell” and “Home of the Brave”.

Sporting Kansas Park first opened in time for the 16th Major League Soccer Season, with the inaugural home fixture held against Chicago Fire on 9th June 2011. The Wizards third stadium in total, previously the club had played at the Arrowhead NFL Stadium between 1996-1997 and CommunityAmerica Ballpark between 2008-2010.

After playing in venues not really designed for soccer matches, the move to the purpose-built facilities at Sporting Park was a huge relief for the club, with the move anticipated to occur sooner if it had not been for the global economic crisis of 2008-2009. Costing an estimated $200 million at the time, the project was incentivised by a $30 million tax rebate by the local council.

Designed by famous sporting architects Populous who famously built England’s National Stadium, and two MLS Grounds: Dick’s Sporting Goods Park and BBVA Compass Arena, Sporting Kansas Park is similarly intimate with a capacity of 18,467 for soccer matches. It can however be expanded to 25,000 when hosting concerts.

Upon opening, Sporting Kansas announced that they had formed partnership with Lance Armstrong’s Livestrong Foundation with the stadium becoming known as the Livestrong Sporting Park. The deal was terminated two seasons later after Armstrong publicly confessed to doping throughout his cycling career.

To date Sporting Kansas Park holds the distinction of being the only MLS ground to have hosted the MLS All-Star Cup, a match of the U.S national team, and the MLS Cup in a single season. Occurring in the 2013, the attendance records was continually broken, starting with the All-Stars game against A.S Roma followed the Eastern Conference Final against Houston Dynamo which reached the fire safety limit.

Below is a seating plan of Sporting KC's Children’s Mercy Park: 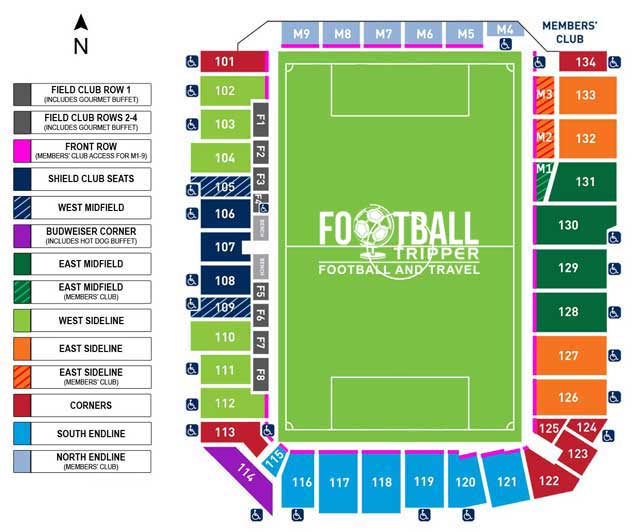 Sporting Park embedded within the heart of an shopping and entertainment complex and thus there are a numerous places to drink at before the game, although the number of restaurants does outweigh the number of bars within the complex.

North west of the ground there is the likes of Yard House Sports Bar, Chili’s Grill & Bar, and a Hooters bar which is famous American invention known for “wings & waitresses”.

The Shopping centre has it all from affordable fast food chains such as McDonalds, Taco Bell and Quiznos to more sit down restaurants such as Olive Garden, IHOP and Longhorn Steakhouse.

Inside Sporting Park there are a number of food options to choose from courtesy of caterers KC American Sportservice.

Fans can purchase Sporting Kansas City goods from the two stores located either side of the stadium at sections 114 and 131. Open on match days only, these are supplemented by several merchandise kiosk dotted around the stadium’s concourse and the official MLS Online Store.

Sporting Kansas City sadly do not offer fans stadium tours of the facilities at Sporting Park as of the 2015 season, however if this ever changes we’ll be sure to update this section.

How to buy Sporting KC Tickets

Tickets to see Sporting Kansas City play at home during the 2015 MLS season are generally priced between $25.50 – $160.00 depending on where you sit within the stadium. After adding tax and booking fees onto the prices you’re probably looking at a total cost up to $10.00 more expensive than listed.

To purchase tickets you can either phone the box office on 888-4KC-GOAL, purchase a ticket at the stadium in the build up to the match or visit the official Ticketmaster page for online sales.

How to get to Children’s Mercy Park

Where is Children’s Mercy Park?

Sporting Park is located next to Kansas Speedway which is just off of the Interstate 435, a few miles west of the main city centre.

Whilst there are numerous car parks located around Sporting Park, only lots I and J are designated as “general parking” which means you can just turn up at the day and drop your car off. Check out this parking map to see the general parking areas – they are highlighted orange.

Within five minutes either side of Sporting Park there are hotel choices starting with Holiday Inn Express (North), Hampton Inn Kansas (East), Chateau Avalon (South) and Country Inn & Suites by Carlson (South) which is the most affordable.

Who plays at Children’s Mercy Park?

What is the capacity of Children’s Mercy Park?

As of 2023 Children’s Mercy Park has an official seating capacity of 18,467 for Football matches.

When was Children’s Mercy Park opened?

What is the postcode for Children’s Mercy Park?

The postcode for Children’s Mercy Park is 66111.

Covid Restrictions may be in place when you visit Children’s Mercy Park in 2023. Please visit the official website of Sporting KC for full information on changes due to the Coronavirus.